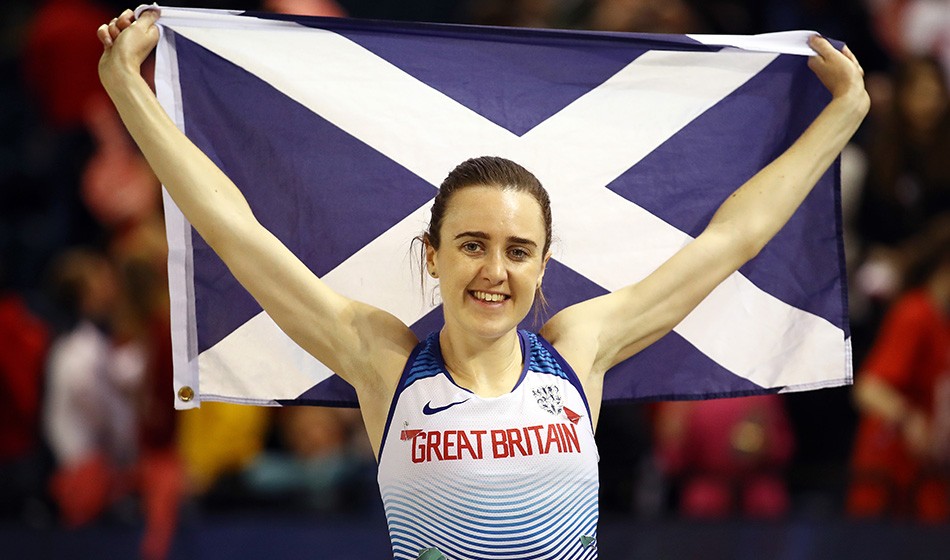 Laura Muir delivered the 1000m victory, but not the world record, she had wanted while training partner Jemma Reekie treated the Emirates Arena crowd to a remarkable finishing kick which landed her first place in the 1500m at the Müller Indoor Grand Prix in Glasgow.

The day’s event schedule had been designed to reach a climax with Muir’s attempt at breaking the 2:30.94 mark set by Maria Mutola in 1999 and the home favourite had been in confident mood ahead of her arduous task.

There was no margin for error yet the pace, led by Pole Anna Dobek, slipped behind schedule from a relatively early stage and Muir, whose winter has been badly disrupted by injury, simply had too big a gap to claw back. The clear winner ultimately crossed the line in 2:33.47.

Despite the air of slight disappointment, the four-time European indoor champion was still able to see her performance very much in a positive light.

“We set off at a good pace but we lost a wee bit around 600m and that was hard to claw back,” said Muir.

“I gave it a good shot and for where I am in my training, it’s really solid and I can build on that throughout the year.

“It’s that last lap that’s really tough. I gave it the best shot I could – I’d have loved to have run faster and have run a PB and got a new British record but I gave it a good shot. And the crowd were fantastic so I really enjoyed it.”

She added: “It’s a solid run. Considering the amount of training I’ve missed over the winter, it’s a good place to be and I can build on it and get stronger and faster. I’d have loved to have run faster and have got the record but putting it into context, this is a good place to be.

“I was out of spikes all of December, half of November. It was only the start of the year I was back in trainers and even when I got to Potchefstroom (training camp), the second week in January, I was still in trainers. I’ve only been in spikes for five, six weeks so to run that time with the build-up I’ve had is actually really good and I’ll push on from there.”

Reekie rises to the occasion again

It was a case of another race, another record for Reekie in the 1500m. There were no British marks this time for the 21-year-old who has set new standards indoors over 800m, 1500m and the mile in recent days, but she did take another record from Muir – of the Scottish native variety – with her Glasgow victory in a time of 4:04.07.

Reekie left it late but a searing last lap took her past Ethiopia’s Dawit Seyaum, who ran a season’s best 4:04.24, while Moroccan Rababe Arafi was third in 4:05.34. 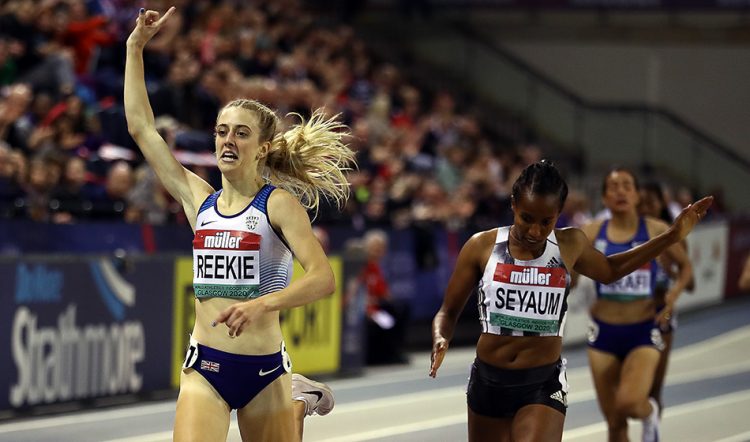 “I think that just shows the shape I’m in but I’ve got a lot more to give,” said Reekie. “I tried that last year and I panicked so I tried to stay calm and not panic and stay focused all the way. It’s definitely a good confidence boost and it’s exciting for me. I knew this could be a great race and that I could win it. That’s the difference. I’m not just coming to line up on the track now. I’m coming to win.

“I went to the inside and thought I’ll just ride it. I tried not to waste too much energy and hope a gap opened up. It worked out. There were a few points I had to get my elbows out. But that’s middle distance running. I’m still learning but to have the confidence I could do that is good.”

The men’s 1500m went to Kenya’s Bethwell Birgen, who ran 3:36.22 to hold off the attentions of two-time European indoor champion Marcin Lewandowski (3:37.13), while there was a personal best of 3:37.22 for Spaniard Jesus Gomez. Britain’s Piers Copeland also clocked a personal best, 3:38.81, in finishing fourth.

Both Charlie Da’Vall Grice and Jamie Webb did not finish.

Another British performance of real note came in the women’s 400m as Jessie Knight defeated a high class field. The primary school teacher who is more accustomed to the 400m hurdles obliterated her personal best of 52.21 by clocking a stadium record 51.57 to beat European champion Justin Swiety-Ersetic and the Netherlands’ Lisanne De Witte.

Stephenie Ann McPherson suffered a heavy fall and Janieve Russell also took a tumble but got back up to finish the race.

“That was just amazing,” said the Marina Armstrong-coached athlete. “I got a stadium record and, being on that start list, on paper I should have been last. I had to give it everything and when I broke I knew I couldn’t afford to lose it.

“I ran 52.2 last week and won comfortably but I was strong at the end. My coach puts a really strong programme together and it’s paying off because of the amount of over-training I’m doing. It shows hard work pays off.”

The reigning world indoor champion Adam Kszczot is no stranger to 800m victory and he came out on top once again in Glasgow, his time of 1:46.34 proving enough to beat Kenya’s Cornelius Tuwei (1:46.52). There was plenty for the Scottish crowd to cheer in that race, too, as Guy Learmonth produced a season’s best of 1:47.16 for third and world 1500m finalist Josh Kerr a personal best of 1:47.40 for fourth, the same time given to the fifth-placed Elliot Giles.

60m wins for Fraser-Pryce and Baker

There were no surprises in the 60m races, with Shelly-Ann Fraser-Pryce and Ronnie Baker coming out on top.

Two-time Olympic and current world 100m champion Fraser-Pryce was running in Glasgow for the first time since 2014 and was a convincing winner in 7.16 ahead of world indoor champion Murielle Ahoure. Jamaican Natasha Morrison was third in 7.30 while Amy Hunt, the 17-year-old Briton who broke the world 200m junior record last year, did not look out of place in such esteemed company in coming fourth with 7.36.

Baker is a world indoor bronze medallist and looked in total control as he ran his way to a stadium record of 6.50, defeating his fellow American and world 4x100m relay champion Mike Rodgers (6.67). Slovakia’s Jan Volko was third in 6.68, the same time given to Britain’s CJ Ujah in fourth.

Pozzi continues his unbeaten run, while Talay wins by the finest of margins

In the 60m hurdles events, world indoor champion Andrew Pozzi continued his unbeaten start to 2020 with victory in a time of 7.57 to beat Kuwait’s Yaqqub Mohamed Al You (7.61) and Milan Trajkovic of Cyprus (7.72). Britain’s David King was fourth, in 7.77, with Cameron Fillery eighth in 8.00. 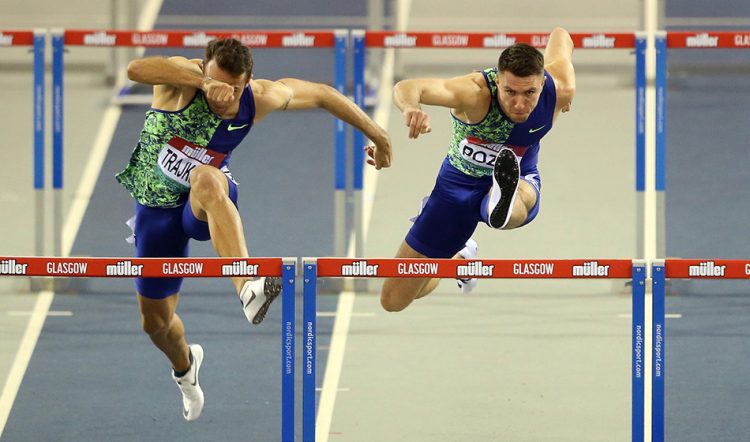 » A report on Mondo Duplantis’ world pole vault record in Glasgow can be found here. See the February 20 edition of AW magazine for further coverage