Mo Farah remains on track for world double in London 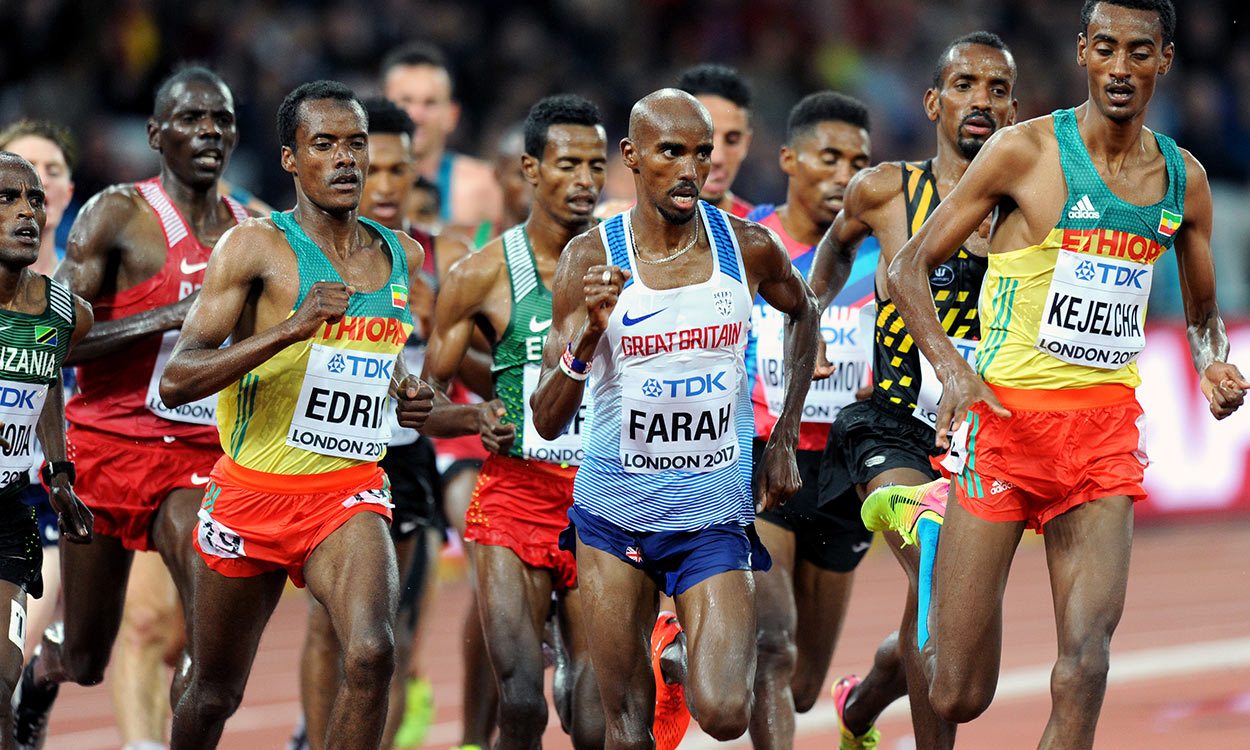 Five days after winning the 10,000m for his 10th global gold, Mo Farah remains on track for a fifth consecutive major championships double after safely negotiating the first round of the 5000m.

Farah had been left with a bruised knee and stitches in his leg as well as the gold medal for his impressive 10,000m efforts on Friday. He showed no ill-effects, however, as he clocked 13:30.18 for a comfortable second-place finish, choosing not to race it out with Ethiopia’s world indoor 3000m champion Yomif Kejelcha who came out top with 13:30.07.

As the rain continued to fall on a cool evening in the UK capital, Farah sat back in the opening stages before working his way up in the 21-strong field. There were 16 still in contention at 3000m, led by Tanzania’s Emmanuel Giniki Gisamoda in 8:18.12, as Farah was eighth in 8:18.90.

“It was cold and miserable out there, but job done,” said Farah. “I had to get back into some kind of running again, it has been a few days of chilling out and trying to recover.

“The 10,000m did take a lot out of me but I am okay now. I’m glad I came through tonight and now I can get ready for the final.

“The knee is fine now, just the body is a bit tired but anything is possible. I just need to recover now and get in the zone.”

Looking ahead to the final, he added: “It ain’t easy. You have seen that with Usain Bolt. It would have been nice to see him win but it doesn’t just happen. No one is going to give it to you, no matter who you are.

“It would be pretty amazing to bow out with another double gold but these guys are coming for me. I have to be ready. I am going to do it. ”

After his 10,000m victory, Farah had said: “People take my kindness for weakness. If I was weak do you think I would have won?” He’ll now look to further prove his strength on Saturday as he goes for his fourth world 5000m title.

There was drama in the quicker second 5000m heat as USA’s Paul Chelimo suffered a fall and Andrew Butchart did well to stay on his feet.

But as the heat was won by Ethiopia’s Selemon Barega in 13:21.50, the Scot knew he has done enough to progress on time. Easing and smiling as he approached the line, Butchart clocked 13:24.78 in seventh, with Chelimo just behind him.

Running 13:26.67 in ninth, Kemoy Campbell became the first ever Jamaican to make a world 5000m final.

“We could see the result from the previous race so we could just jog the last 200m,” said Butchart. “It was a bit of a choppy race.

“I just remember Chelimo going down and having to adjust my stride but luckily my hamstrings are pretty springy so I was able to stay in the game.”

Butchart could be seen turning to Chelimo on approach to the finish and the Briton explained: “I looked at him and I could see that he was grinding so I was like, ‘chill, Paul, chill’. We were just chilling out on the home straight. I knew we were through.”

In other qualifying action and contesting his second 200m race in just over two hours, Isaac Makwala was among those to advance to the final of the half-lap event.

Having missed Monday’s original first round through illness, the IAAF allowed the Botswana sprinter to run a heat on his own. Requiring a time of 20.53 or faster to progress, the 19.77 200m man ran 20.20 to secure his spot before doing some press-ups at the finish line.

There were no exercises in celebration after his semi-final run, but clocking 20.14 (+2.1) he placed second behind American Isiah Young’s 20.12 to progress.

Finishing third was Britain’s Nethaneel Mitchell-Blake and his time of 20.19 was also enough to see him through, but he won’t be joined by team-mates Danny Talbot and Zharnel Hughes after they clocked 20.38 and 20.85 respectively.

Like Farah, Wayde van Niekerk is another whose hopes of a double remain alive after he made the final the day after his 400m win, running 20.28 for third in heat three.

Yohan Blake missed out with his time of 20.52 for third in heat two and for the first time since 2003 Jamaica will not have a 200m finalist, though they will be represented in the 5000m. Usain Bolt, racing just the 100m individually in London, has himself made the past six 200m finals.

After a strong start, GB’s Rosie Clarke suffered a fall when running at the back of the lead pack just before the 2km mark. She got back up but her 9:49.36 for ninth wasn’t enough to see her through.

One throw was all it took for GB’s Nick Miller to secure his spot in the hammer final. With a mark of 75.52m he was two centimetres over the qualifying mark and advances along with defending champion Pawel Fajdek and Olympic, world and European bronze medallist Wojciech Nowicki.

Long jumper Lorraine Ugen was another Briton to safely progress as her leap of 6.63m was the third best of the qualification round and the best in group B. None of the athletes achieved the qualifying mark of 6.70m but also among the top 12 to make the final were Russia’s Darya Klishina, competing as a neutral athlete, with 6.66m and USA’s Olympic champion Tianna Bartoletta with 6.64m.

Ugen’s team-mate Shara Proctor missed out by just a single centimetre with 6.45m, while Jazmin Sawyers also saw her competition come to an end with a best of 6.34m.