Mo Farah forced to settle for silver in world 5000m 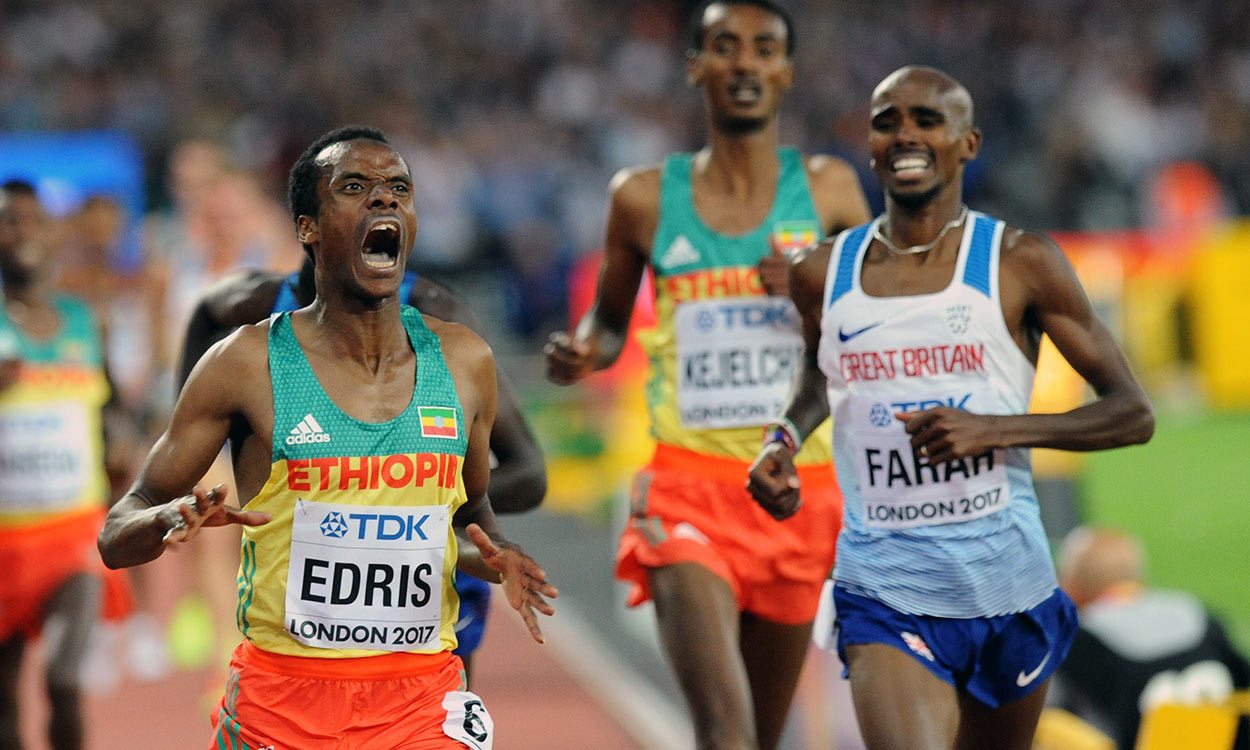 There was to be no fairytale ending for Mo Farah as he brought the curtain down on his storied global track career with a 5000m silver medal at the IAAF World Championships in London.

It was, instead, Muktar Edris who stood atop the podium following a track battle in which the Ethiopian team strategy paid dividends and allowed the world cross-country medallist to fend off a defending champion who gave it his all but came up short in a major final for the first time since 2011.

The Briton was close, but not quite close enough as Edris hit the line in 13:32.79, Farah finishing fractionally behind in 13:33.22 and American Olympic silver medallist Paul Chelimo in 13:33.30. Britain’s Andrew Butchart finished eighth in 13:38.73.

After something of a chess match, the crucial moment in proceedings came with a lap to go when Ethiopia’s Yomif Kejelcha surged to the front. As it transpired, the plan had been for him to push the pace, hurt Farah and put his fellow countryman in the right position to charge for victory. It worked.

Farah, who normally finds himself right at the front of the field in the final stages, now had two fast-charging Ethiopians in his way as well as the small matter of Chelimo bearing down on him.

The Briton went to the well again but Edris moved out of the slipstream to take victory, his message clear as he performed the vanquished hero’s trademark ‘Mobot’ move while the bewildered home crowd attempted to digest what they had just witnessed.

As with Usain Bolt seven days previously, not seeing Farah take gold was taking quite a bit of getting used to.

“I wanted to win, I was confident, but at the same time the better man won on the day,” said the man who got these championships off to golden start in the 10,000m on opening night. “There is nothing you can do, it happens in athletics. I gave it my best, it wasn’t enough today.

“The 10km did take a lot out of me to be honest with you. But at the same time, it was a matter of just recovering and coming back for the 5km.

“They had a game plan. They had to sacrifice one of them – Kejelcha – not to get a medal, and Edris to sit at the back and to do as less work as possible and to come beat me on the last lap.

“When you get in the race you want to cover every move. Looking back, I used quite a lot of energy trying to cover moves and making sure I’m in the right place in the last lap.

Farah was given a warning that he would have a fight on his hands right from the gun when Chelimo immediately took it out, the field going through the first lap in 62.25. It wouldn’t be long, however, until the pace slowed and the mind games began.

As if to let Farah know he had support on the track as well as off it, Olympic sixth-place Butchart moved to the front in third lap and stood shoulder to shoulder with his team-mate as the field bunched and the pace remained pedestrian.

The lead would then gradually change hands between Edris and Farah over the next few laps but it was the third member of the Ethiopian contingent  – Selemon Barega – who made the first significant move of the contest. He decided to increase the pace and opened a gap at the front which took a lap to close down.

It was Farah who led the chasing pack and he was back at the head of affairs when the next challenge came.

This time, it was Patrick Tiernan of Australia out on his own, around 10 metres clear but there were few concerns being shown by those behind him. Indeed, he was swallowed back up into the group again with 600m to go and it was at this point when Butchart moved out, briefly went into the lead and sparked all sorts of moves from those around him.

The bell proved to be the cue for that Ethiopian plan to kick into action and leave Farah without that winning feeling.

“I was highly prepared for this race and I knew I was going to beat Mo Farah,” claimed Edris.  “After the 10km he was maybe tired so he did not have enough for the last kick. I was stronger.

“Mo has many victories but now I have one. I am the new champion for Ethiopia. That’s why I did the Mobot. I am the next champion.

“I have won the gold in front of his home crowd. I didn’t have much support but we did it. I did the Mobot out of respect as well for him.”

For Farah, there was simply an admission that he could have done no more.

“What I have achieved for the last six or seven years has been incredible. It just shows what kind of person I am and what it takes to be champion,” he said.

“I know myself when I crossed the line there was nothing left – I gave it all.

“I had tears in my eyes, I’ve never had that before. It’s been an amazing journey and to end it in London, where it all started I got a bit emotional.”