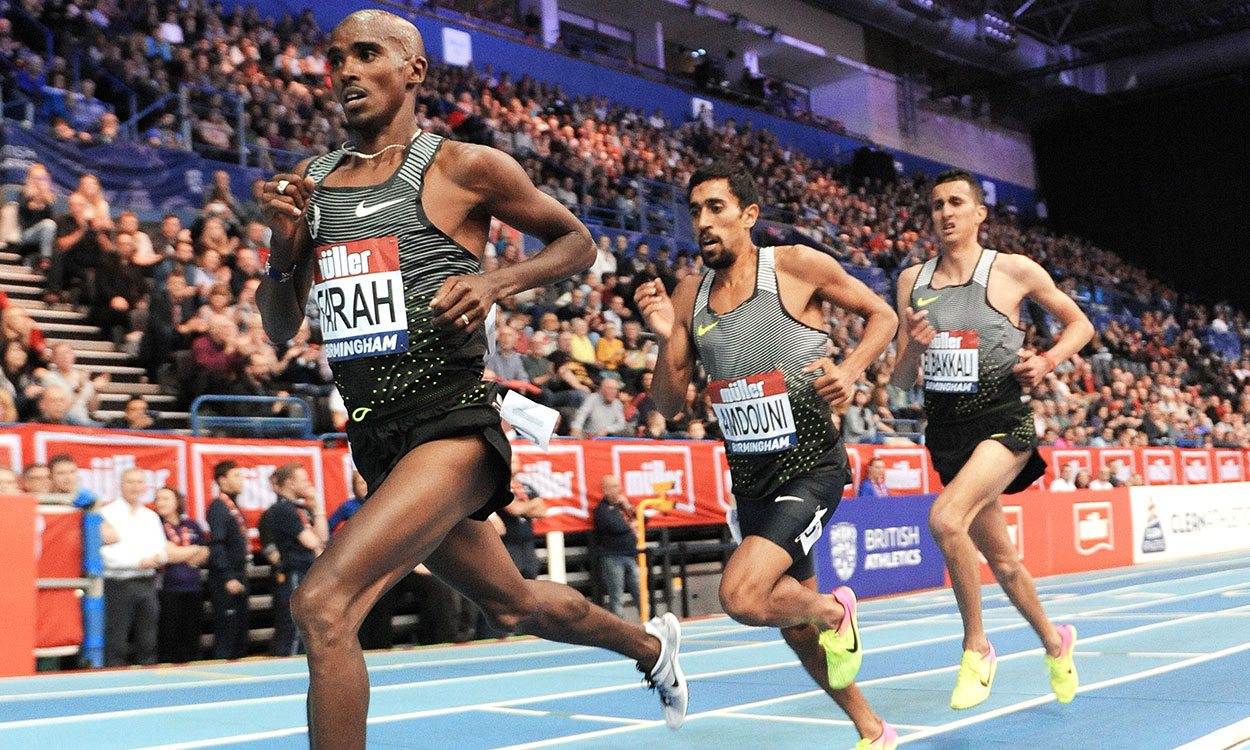 The four-time Olympic champion returns to winning ways at the Müller Indoor Grand Prix in Birmingham as he runs his last indoor race, while Andrew Pozzi storms to another world lead

Clocking 13:09.16, the four-time Olympic gold medallist improved on his 13:10.60 British record run in Birmingham six years ago – which had not been ratified as a European record – plus Bouabdellah Tahri’s European mark of 13:11.13 from 2010 to beat Bahrain’s Albert Rop with 13:09.43. After some results confusion, Morocco’s Soufiane El Bakkali was confirmed third in a 13:10.60 national record and France’s Morhad Amdouni fourth with a 13:11.18 PB.

The pace had dropped in the fourth kilometre but a strong last 1000m of 2:32.89 ensured a record-breaking finale for Farah, who will switch to road racing after competing on the track at the IAAF World Championships in London this summer.

“I can’t quite believe it is my last race but I have had a great indoor career. It is something that must come to an end,” said Farah.

“It is weird thinking about it and saying goodbye because I have had great support from everyone and in particular this track where I have broken so many records. It has been amazing over the years.

“I didn’t know I had broken the European record but that is good. It means a lot.”

The 33-year-old had been looking to bounce back after his seventh place finish at the Simplyhealth Great Edinburgh XCountry last month and added: “I knew from Edinburgh five weeks back that I needed to do some work. Hard work pays off.”

Andrew Pozzi also continued to impress in the 60m hurdles, improving his own world lead and PB by 0.01 to clock 7.43 for victory, beating fellow European Indoor Championships-bound Briton David King, who clocked a 7.63 PB. USA’s world 110m hurdles record-holder Aries Merritt, who had a kidney transplant in 2015 and had been keen to continue racing his way back to top form, ran 7.70 for third.

The 60m was won by USA’s world-leader Ronnie Baker in 6.55. Kim Collins – making his 50th appearance on British soil and his 10th at this Birmingham arena – secured the runner-up spot as he narrowly pipped Britain’s Richard Kilty and Jamaica’s Everton Clarke, all three recording the same time.

After setting a world indoor 600m best of 1:14.91 at the end of January, USA’s Casimir Loxsom was victorious over 800m, clocking another PB with a world-leading 1:46.13 to beat world bronze medallist Amel Tuka of Bosnia and Herzegovina with a 1:46.59 national record.

Kyle Langford, fresh from breaking the British 600m best in Athlone, ran another indoor PB with 1:46.79 for third.

Having claimed high jump silver at the British Athletics Indoor Team Trials in Sheffield last weekend to secure his spot for Belgrade, Britain’s world indoor medallist Robbie Grabarz – competing just five weeks after having surgery to remove his ruptured appendix – was again in the runner-up spot as he cleared 2.28m to place him behind USA’s Erik Kynard with a clearance of 2.31m.

Godfrey Mokoena was pleased with his 7.99m leap for long jump victory having recently switched coaches to Cuba’s nine-time world gold medallist Iván Pedroso. Recording his winning leap in the third round he beat Tyrone Smith, who improved the Bermudian indoor record by one centimetre with his first leap of the competition – 7.83m.

The meeting brought the IAAF World Indoor Tour to a close, with Mokoena and Maslák among the overall series winners in their respective events.

» Results can be found here, with a report on the women’s events – including a European record-breaking 1000m by Laura Muir – here. See the February 23 edition of AW magazine for full coverage