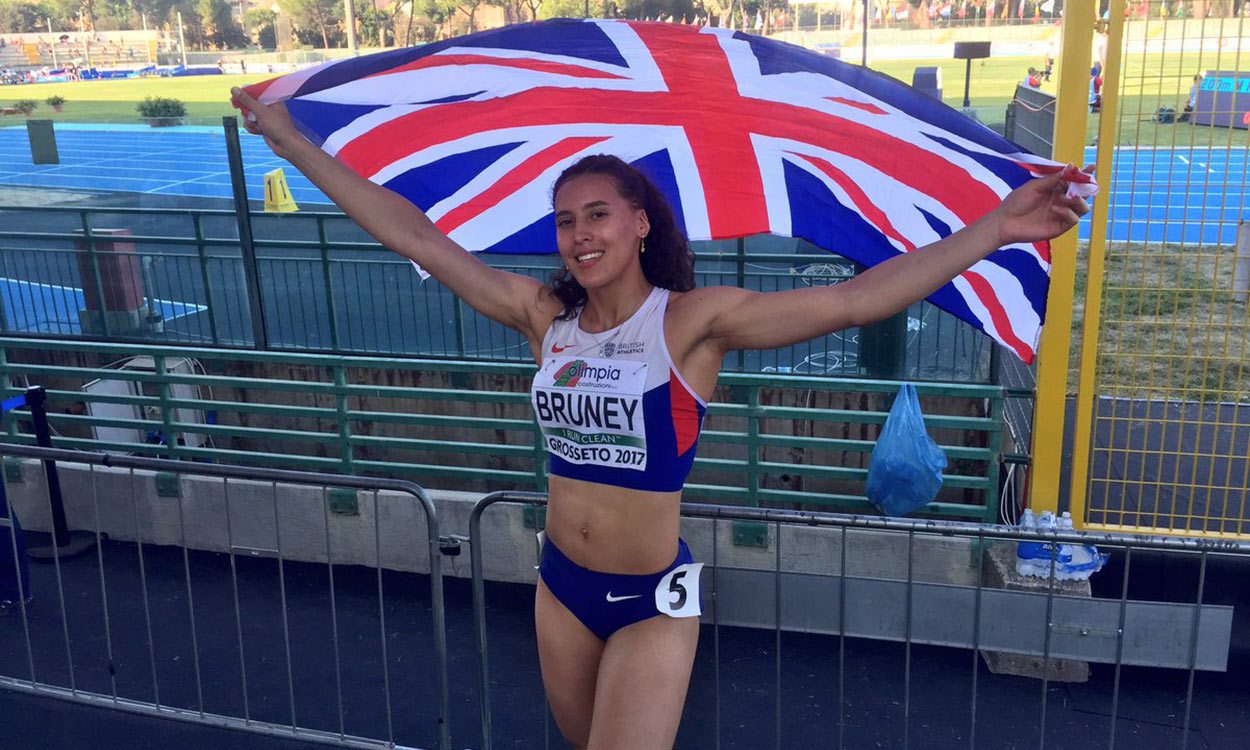 Maya Bruney and Toby Harries both won 200m gold medals on a successful day for Great Britain at the European U20 Championships.

Bruney entered the championships with a 23.51 PB but the John Blackie-coached Blackheath and Bromley athlete improved that to 23.47 in her heat and then shattered that with a 23.07 in her semi-final despite a 1.9 m/s headwind. In the final she trimmed that to 23.04.

She won by four metres from Sophia Junk of Germany’s 23.45.

The 23.04 moved Bruney to sixth all-time in the UK under-20 rankings but only third from her club. Remarkably, Dina Asher-Smith won the event in 2013 and Shannon Hylton was second in 2015.

“I’m really happy with the race because I did a PB and I ran the fastest European time this year. The crowd was fantastic and my family are here so I hope they are proud of me.”

Britain gained a one-two in the men’s event with great times considering the 0.9 m/s headwind.

His best ever time of 20.56 was a windy performance from finishing second in the 2015 Commonwealth Youth Games.

Jona Efoloko, who was disqualified from the heats at Bedford, only qualified by place for the Italian final by one hundredth of a second in 21.20 and had a better run in the final.

Finland’s Samuel Purola, who only made the final as a fastest loser, took the bronze in 21.00.

Britain also gained an one-two in the women’s 800m.

It was a slow race with the first lap a pedestrian 66.17 but the second lap was much quicker and Khahisa Mhlanga prevailed but only by 0.05 of a second from team-mate Ellie Baker. Seventeen-year-old Mhlanga won in 2:06.96. Third was Slovakia’s Gabriele Gajanova as just 0.21 of a second covered the top four.

Favourite Jakob Ingebritsen fell but still finished eighth less than two seconds back. He made up for it in the 5000m as, covered in plasters, he blasted a relaxed 54.87 last lap to win gold easily in a very slow 14:41.68.

Tom Mortimer was 12th after leading early on.

Predictably Anastasiya Bryzhina of Ukraine won the women’s 400m in 52.01. Hannah Williams took bronze for Britain in a PB 52.55, to remarkably match the PB of her older sister Jodie.

Another British medal was won by Robert Sakala who improved his 110m hurdles PB to 13.48, which puts him equal eighth all-time in the UK under-20 lists. He finished second to Switzerland’s Jason Joseph’s 13.41.

Britain also won silver in the women’s hurdles. France’s Solene Ndama was winner in 13.15 with Alicia Barrett a clear second in 13.28. Sophie Yorke was fifth in 13.51.

There were also British medals in the field.

Molly Caudery set a PB 4.35m in the pole vault to take the silver medal behind Sweden’s highly regarded Lisa Gunnarsson, who won with a 4.40m vault.

Caudery’s vault moves her up to equal third in the UK all-time junior lists level with Holly Bradshaw. Her previous best was 4.25m.

There was a British bronze in the men’s high jump in what will almost certainly be the best quality event of the championships.

There were a massive number of PBs and gold went to Belarus’s Maksim Nedasekau, who looked like he was heading for third place when he failed first time at 2.28m, while his two fellow medallists cleared it with PBs.

But Nedasekau took the lead with his final chance jump at 2.30m and then cleared 2.33m with his last effort to improve the 40-year-old championship record.

Ukraine’s Dmytro Nikitin was also in smoking hot form and improved his PB repeatedly all the way from 2.18m to 2.28m.

That height was also cleared by Britain’s Tom Gale who previously had a best of 2.23m.

The winner’s leap was the highest by a world junior since Smith’s 1992 mark.

Julia Ritter of Germany won the shot with 17.24m with Divine Oladipo, showing greatly improved form from qualifying with a 16.03m throw for fourth.

Cyprian Mrzyglod won the javelin with a Polish under-20 record 80.52m.

Britain’s Sam Talbot pulled out after not recording a long jump mark.

George Evans qualified for the discus final with a 56.91m throw which placed him sixth overall.

Great Britain qualified as fifth fastest in the women’s 4×400 relay with a time of 3:40.62. Disappointingly, after much past success, they do not have a men’s 4x400m team and would only have needed a 3:12.74 clocking to make the final . The four fastest juniors in Britain this year total under 3:10 for their combined times.