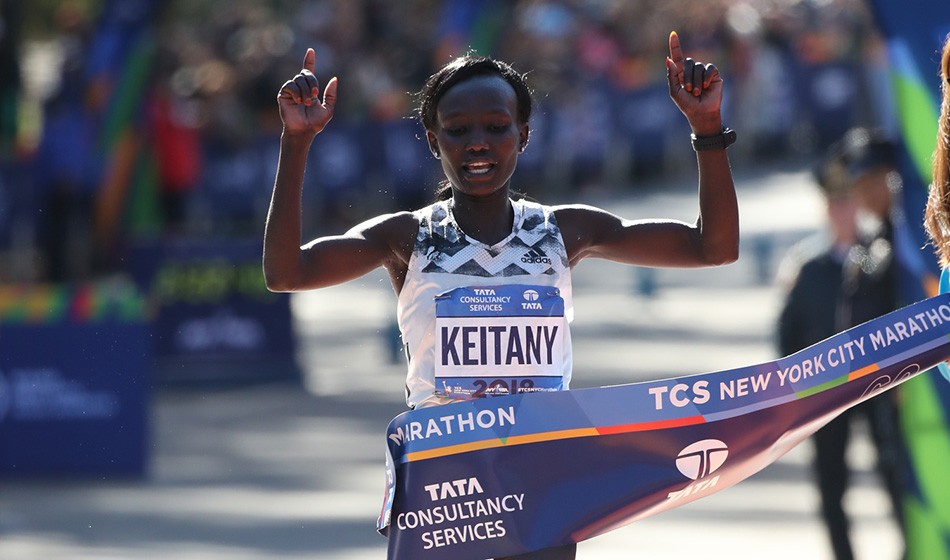 After the super-fast times in Chicago and Vienna last month, it is now the turn of the TCS New York City Marathon.

Unlike the women’s world record by Brigid Kosgei at the Bank of America Chicago Marathon and the sub-two-hour marathon by Eliud Kipchoge at the INEOS 1:59 Challenge in Vienna, there will be no records or all-time best times on a New York course that is not renowned for being fast.

But the line-ups are sure to produce a great day of racing with Mary Keitany and Lelisa Desisa defending their titles on Sunday (November 3).

Keitany, the third fastest woman of all time with 2:17:01, is going for her fifth win in New York City and faces Boston Marathon winner Worknesh Degefa and Tokyo winner Ruti Aga, both of Ethiopia.

Last year Keitany won by more than three minutes with a sub-67 minute second half.

“New York has become a second home to me,” says Keitany, “and every year I circle the TCS New York City Marathon
on my calendar as a date to look forward to.

“I’m very excited to return on November 3 to race for my fifth New York City Marathon title on my favourite course in the world.”

Half-marathon world record-holder Joyciline Jepkosgei of Kenya is set to make her marathon debut, while Vienna Marathon winner Nancy Kiprop, 40, of Kenya and American Des Linden, who won Boston in horrendous weather in 2018, are also due to run.

Linden is joined by Sara Hall and Kellyn Taylor as the home hopes.

It remains to be seen how fresh men’s champion Desisa is this weekend as the Ethiopian won the world title in Doha a month ago.

Racing in the heat of Qatar in a midnight marathon, he sprinted to gold in 2:10:40.

He will need to be at his best because he faces Geoffrey Kamworor, the 2017 New York City winner and multiple world cross-country and world half-marathon champion.

Shura Kitata, who was runner-up last year behind Desisa and ahead of Kamworor, is also entered. The 2018 fourth-placer and 2016 Olympic 10,000m bronze medallist Tamirat Tola returns, too.

The home nation hopes in the men’s race are led by Jared Ward, who was sixth here 12 months ago and eighth in Boston in April, plus Abdi Abdirahman.

Britain’s Andy Vernon also makes his marathon debut after an attempt to run London earlier this year was scuppered by injury.

He is now back to fitness but was only eighth at the Simplyhealth Great South Run over 10 miles earlier this month.

In the women’s wheelchair race Tatyana McFadden chases a record sixth career title in New York, although she is up against defending and two-time champion Manuela Schär of Switzerland.

» See the November 7 edition of AW magazine for coverage