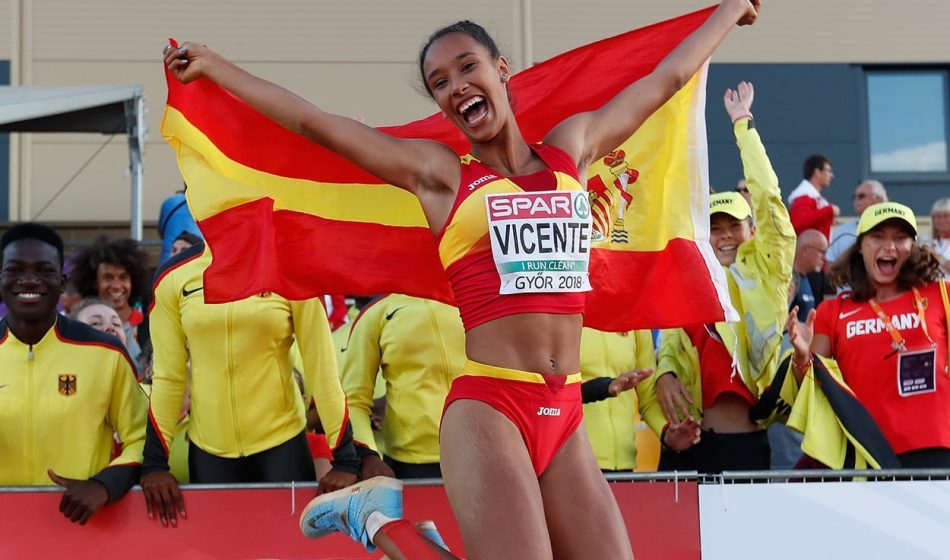 Two days after breaking the world under-18 best to win heptathlon gold at the European U18 Championships in Gyor, Spain’s Maria Vicente claimed a second title with success in the triple jump.

Competing for the fourth day in a row, the 17-year-old achieved the leap of her life in the final round to regain the lead and win ahead of Bulgaria’s Aleksandra Nacheva.

Vicente had broken the championship record with a PB of 13.84m in the first round, which led the competition until Nacheva’s final round 13.88m.

But Vicente also saved her best until last and responded by recording 13.95m to take the title, while Finland’s Jessica Kahara claimed bronze with 13.29m.

“I enjoyed competing with Aleksandra for the first place, and I am extremely happy that I was able to win another gold medal at this European Championships,” said Vicente. “If you enjoy what you do, you can achieve anything!”

Sit back and enjoy this incredible climax to the triple jump final at the European U18 Championships in Gyor.

Another gold medal for Spain's Maria Vicente and another championship record! pic.twitter.com/33xHVU1Bcr

Kahara was another athlete doubling up and she also secured silver in the high jump as well as her triple jump bronze.

She claimed her second medal after a clearance of 1.83m as Ukraine’s Yaroslava Mahuchikh got gold with 1.94m.

After his bronze in the 100m, Norway’s Pal Haugen Lillefosse cleared a championship record 5.46m for the pole vault title, while Germany’s Nick Schmahl won the long jump with a wind-assisted leap of 7.60m (+2.7).

More from the final day of European U18 Championships action, which saw GB top the medal table, can be found here.