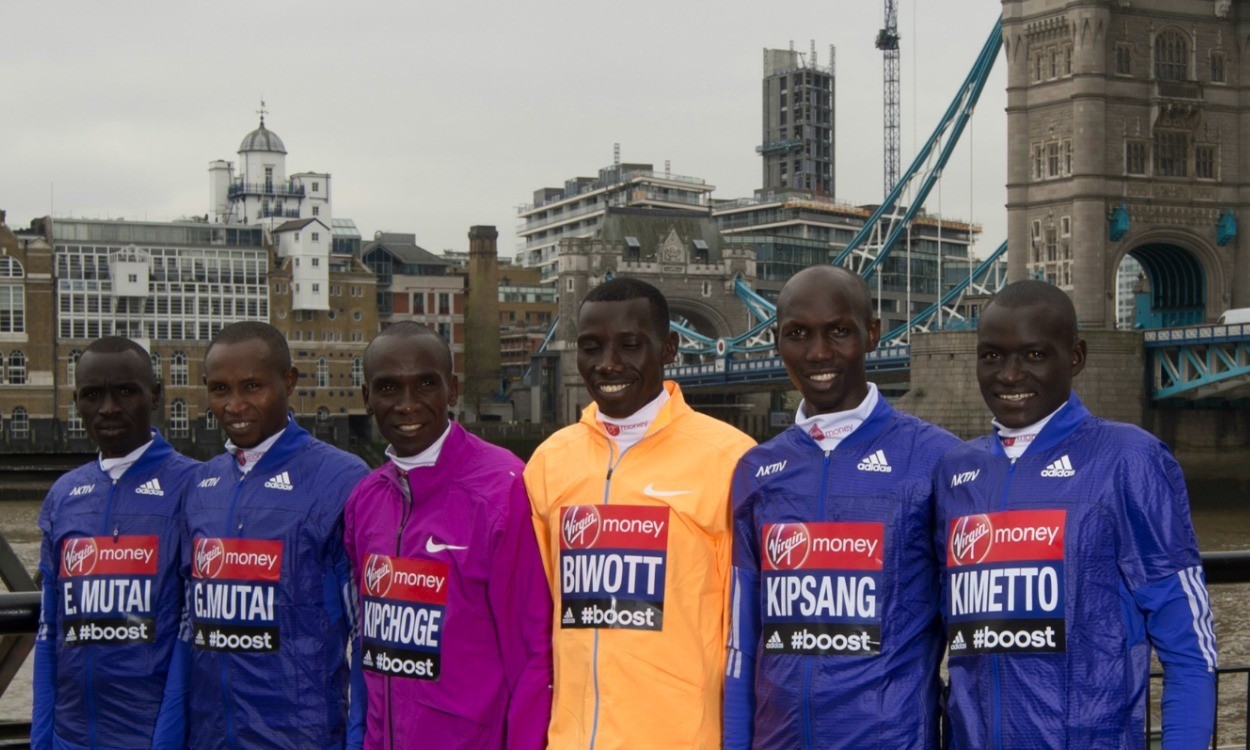 Where to start? Not only does this year’s Virgin Money London Marathon feature two of the greatest ever elite fields, but Paula Radcliffe returns to the scene of her 2:15:25 world record as she draws the curtain on her magnificent marathon career, while athletes battle for world titles as the event hosts the IPC Athletics Marathon World Championships.

We take a look ahead to Sunday’s action below. For much more in-depth previews see the bumper 84-page April 23 edition of Athletics Weekly magazine, available now in shops or digitally here. Also, check out the other London Marathon-related content on the AW website, including a feature on Radliffe as she looks ahead to her final marathon, videos featuring some of the key contenders in the men’s elite field and the women’s elite field, an article on Joyce Smith who won the very first London Marathon 35 years ago, an interview with Sonia Samuels who hopes to go faster than ever in the British capital and some last-minute tips for runners taking on 26.2 miles on Sunday.

Kenya’s former world record-holder Wilson Kipsang will attempt to become only the fourth man to claim a hat-trick of London Marathon titles but the defending champion will have to first see off one stacked line-up. Not only does he go up against Dennis Kimetto, who became the first to go sub-2:03 for 26.2 miles in Berlin last year to break Kipsang’s world record, there are a number of other athletes who could break up this head-to-head.

While it has been billed as a battle between these two Kenyans, who are training partners in Iten but have never faced each other over the marathon distance, another six men who have gone sub-2:05 are also in action. Emmanuel Mutai, who won the 2011 London Marathon and ran the second fastest time ever when finishing behind Kimetto and his 2:02:57 in Berlin last year, plus his namesake Geoffrey Mutai, the former Boston, New York and Berlin Marathon champion who won the World Marathon Majors series in 2012, both race. They will be joined on the start line by last year’s London runner-up Stanley Biwott and Eliud Kipchoge, who makes his London Marathon debut after having won last year’s Chicago Marathon.

Although Kenenisa Bekele and Ayele Abshero were forced to withdraw due to injuries, there will still be a strong challenge from Ethiopia led by the 19-year-old 2014 Dubai Marathon champion, Tsegaye Mekonnen. British athletes in action include London 2012 Olympian Scott Overall, who was fifth in the 2011 Berlin Marathon, and Matt Hynes, who finished 10th in the recent Paris half-marathon in 63:54 and should smash his five-year-old marathon best of 2:43:40.

Kenyan runners are set to dominate with the quartet of Mary Keitany, Edna Kiplagat, Florence Kiplagat and Priscah Jeptoo due to battle it out. Even Paula Radcliffe, who will be lining up on the championship rather than the elite start line, believes they are the athletes to beat.

Edna Kiplagat is the defending champion having finished ahead of world half-marathon record-holder Florence Kiplagat 12 months ago. The pair are back to battle it out and will be joined by 2013 champion Jeptoo, plus the quickest in the field with 2:18:37 Keitany, who won in 2011 and 2012, and Ethiopia’s Aselefech Mergia, who has a marathon best of 2:19:44 from Berlin in 2011.

The race will have a strong European flavour too, thanks to two women who have gone under 2:25 – Ukrainian record-holder Tetyana Gamera, the three-time Osaka champion who was seventh in London last year, and Russia’s 2012 Olympic bronze medallist Tatyana Arkhipova.

The British athletes on the elite start line will be Sonia Samuels, who placed 16th at the 2013 World Championships in Moscow, Emma Stepto, who was 14th in London last year and ran a 2:32:40 PB in Frankfurt last September, and Rebecca Robinson, who ran for Britain at the 2010 European Championships after finishing 18th in the London Marathon that year.

With the London Marathon incorporating the IPC Athletics Marathon World Championships, there are a total of eight races for para-athletes in six categories.

Last year Switzerland’s Marcel Hug out-sprinted Britain’s six-time London Marathon champion David Weir in the men’s wheelchair race. This weekend they meet again, while the women’s wheelchair race sees course record-holder Tatyana McFadden of the United States aiming to win her third consecutive London title. Shelly Woods is again Britain’s big hope in the women’s race. The Paralympic silver medallist was a commanding London winner in 2012 and will be pushing for her third victory this time. She will be joined by fellow Brit Jade Jones, the 19-year-old three-time Mini London Marathon winner who dipped under two hours on her full marathon debut a year ago.

El Amin Chentouf returns to London to defend his title in the T11/12 race for visually impaired runners, while Spain’s Maria Paredes Rodriguez goes for gold in the women’s event. London-based New Zealander Tim Prendergast contests the T13 event where his opponents include US ultra-runner Jason Romero and Youssef Benbrahim of Morocco. In the races for athletes with limb impairments, Italy’s Alessandro di Lello aims to retain his T45/46 World Championship crown and Israel’s Eitan Hermon will target the T44 world record in the T42-44 race – an event Britain’s Richard Whitehead has been forced to withdraw from due to injury.

Veteran interest in London centres on the women’s race, with Emma Stepto returning to defend her title but this year in a higher age group, while Paula Radcliffe joins runners on the championship start line. Stepto won the 2014 W40 section with 2:36:05 but now in the W45 age group will have her eye on Joyce Smith’s British over-45 record of 2:32:48.

Another women’s age group best that could fall this year is in the over-50 category as Clare Elms could lower Jo Thompson’s W50 British record of 2:52:33.

With many of the 2014 men’s age-group winners giving the race a miss this year, new names will be taking the medals. British record-holder Steve Way has been injured so the win could go to  Gareth Lowe, M40 runner up last year, who has run a 70:43 half-marathon this year.

All of the ever-presents in the race are now well over 50 and M55 Chris Finill will be hoping to get back under three hours this year.

The event is the official British Athletics three-mile road championships for athletes aged between 11 and 17 in three age categories and an estimated 2000 youngsters will this year take part.

In the under-17 men’s race it should be a battle between Mahamed Mahamed (South East) and Ben Dijkstra (East Midlands), while in the under-15 boys’ event, Turkay Korkmaz (Lambeth) will face competition from Zak Mahamed. In the under-13 boys’ race, Tommy Dawson (Yorkshire and Humberside) will be hard to beat.

Sabrina Sinha (Greenwich) is favourite in the under-17 women’s age group, though National Cross winner Harriet Knowles-Jones (North West) should prove to be a strong challenger. In the under-15 category, Katy Ann McDonald (Wandsworth) is a former champion. In the under-13 age group is Olivia Mason (North West), who has enjoyed a brilliant cross country season.

In the wheelchair competition, Kare Adenegan (U14) looks strongest while Lauren Rowles (U17) starts as favourite in the older age group. In the boys’ race, course record-holders, Isaac Towers (U17) and Nathan McGuire (U17) will be ones to watch.

» See the bumper 84-page April 23 edition of Athletics Weekly magazine, available now in shops or digitally here, for a much more in-depth look ahead to Sunday’s action, including more facts, stats, a course map and more