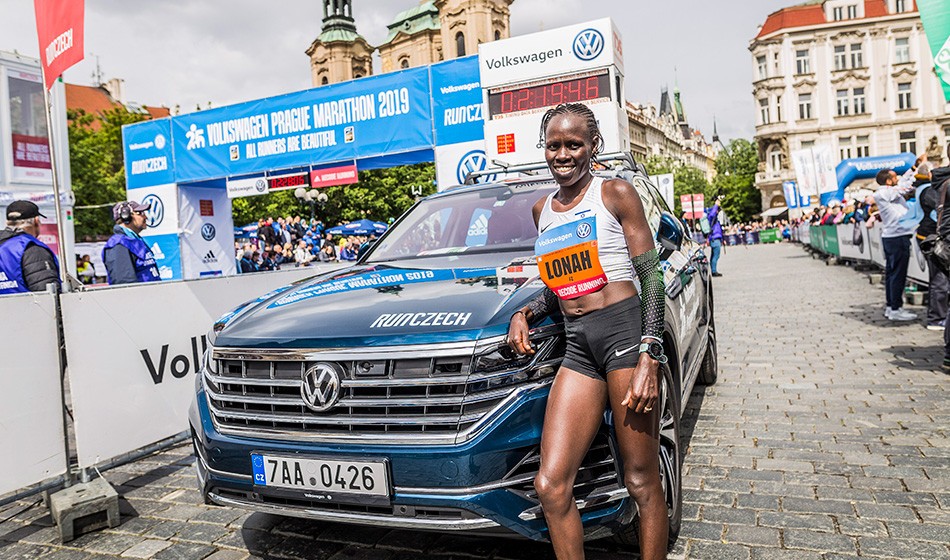 Highlights from a busy weekend of road race action, both in the UK and overseas

European 10,000m champion Lonah Chemtai Salpeter of Israel broke the course record with 2:19:46 to move to third on the European marathon all-time list.

Only world record-holder Paula Radcliffe with 2:15:25 and Germany’s Irina Mikitenko with 2:19:19 have gone faster and it is the quickest time by a European athlete in more than 10 years.

A group of five including Salpeter, Eshete, Yalew, Lucy Cheruiyot of Kenya and Kellyn Taylor from the USA followed a pacemaker through 5km in 16:42. By 20km Salpeter had gapped the other women and passed half way in 70:12 with a lead of a few seconds.

By 30km she had moved over one minute clear and was heading under the former event record of 2:21:57.

Although the wind increased in the latter stages of the race Salpeter continued to increase her pace in the second half for a negative split of 69:33.

Morocco’s Almahjoub Dazza won the men’s race in 2:05:58 for the event’s second-fastest ever time. Ethiopia’s Dawit Wolde ran a PB of 2:06:18 for the runner-up spot, while his compatriot Bantiye Aychew was third in 2:06:23.

The first European finisher was Spain’s Hamid ben Daoud in sixth with 2:08:14, while another Israeli national record fell to Amare Girmaw, who finished eighth in 2:09:54.

With the event being an IAAF Gold Label race, the top five men and women finishers are now qualified for the Tokyo Olympics subject to selection by their national federations.

Chris Thompson and Kate Reed both continued to put their past injury struggles behind them to claim 10km victories in Bristol. 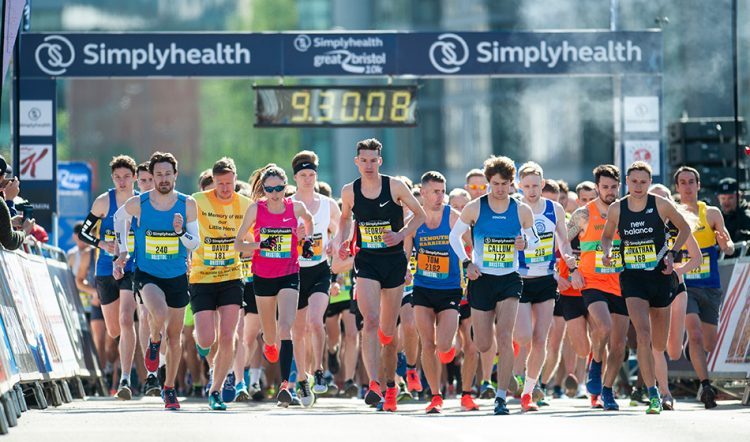 They were followed by Jonathan Cornish from Hercules Wimbledon in third with a time of 30:34.

Local athlete Reed, who runs for Bristol & West AC, took first place in the women’s field in 33:11 and was followed by Annabel Gummow from Winchester & District AC in 34:16 and Laura Gent from AFD in 35:18.

Participants were set off by five-time Olympian and world, European and Commonwealth medallist Jo Pavey.

Pavey set the thousands of runners on their way before taking part in the Simplyhealth Great Bristol Family Run.

She attended the event as title sponsor Simplyhealth’s new active ambassador, to encourage other families to enjoy being active together. 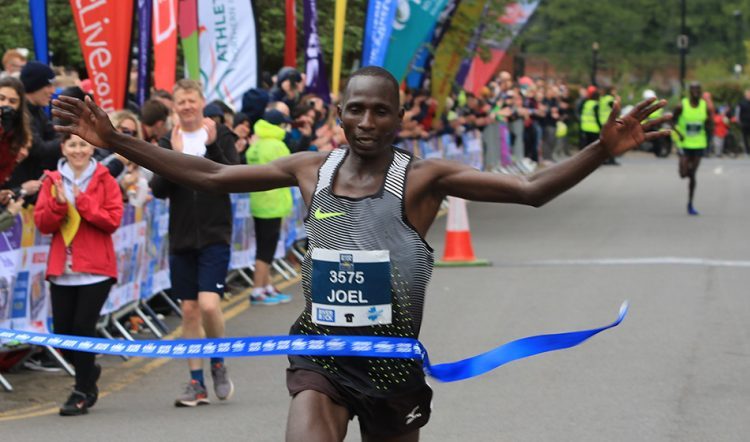 Caroline Jepchirchir made it back-to-back wins in the women’s race with a new record of 2:34:55. Ethiopia’s Shewaye Wolde Meskel occupied the runner-up spot in 2:35:50 after running shoulder-to-shoulder with Jepchirchir for most of the race. Ukraine’s Vira Ovcharuk took third in 2:37:13.

It was the first time the race had been held on a Sunday, as it had previously been a May bank holiday Monday fixture, increasing the entry by 60%. Feedback was also positive regarding the route which the vast majority of runners felt was a huge improvement on its predecessor.

What no-one liked was the extra distance added to the course when the field were misdirected after just two miles, missing out a left turn in east Belfast and adding 0.4 miles to the trip. It also meant that all the subsequent mile markers were out by that amount, adding to consternation as many like to pace themselves by the clock.

The official times, as included in this report, have been adjusted by organisers to reflect the extra length of the course.

Chris Bird flew to victory in Newport, smashing the course record with his time of 2:31:34, James Candy reports.

“I was three seconds outside my PB in the Brighton Marathon three weeks ago and I wish I had waited for the Newport race to try to break it,” said Bird.

“When I ran in Brighton I went off at 2:26.00 pace, but I had a bit of a cold and I suffered as a result. I was hoping to go even faster here, but I felt a little bit tired.

“Adam Holland went off hard, but I finished hard. I hit the front at around 21 miles and, even though I was tying up a bit in the end, I was able to stay clear of the rest.”

Carla Swithenbank won on her own doorstep as she moved up from third last year to triumph in the women’s race with a time of 2:45:48.

The 28-year-old former Police woman led from gun to tape as she knocked 24 seconds off her previous best time and made it a double for the Mickey Morris Racing Club as she followed in the footsteps of the inaugural champion, Natasha Cockram.

“I’m bouncing after that,” admitted Swithenbank. “I’m so proud to have won my local marathon.

“I’m from Newport, I live in Newport and I wanted to win this more than anything. It’s great to have gone from third last year to winning it this time.

“Last year’s race was my marathon debut and I nearly didn’t bother entering. But then I thought, this is in my home town, so I had to give it a go.”

Swithenbank has gone from strength-to-strength since her marathon debut a year ago. She won the European Police women’s title in Dublin in 2018 in 2:46:13 and is getting faster and faster.

A former Wales international footballer, she quit Cardiff City Ladies when she was 21 and has since been concentrating on running.

Matt Clowes claimed victory as he returned to racing after injury

The English international had been struggling with a hamstring injury since pulling out of the Brecon Carreg Cardiff Bay Run at the end of March and headed to Newport to assess his fitness.

He clocked 29:43 to equal the course record.

“The first 5km was slower than the second, but I’m happy with the result. I’m a racer and that’s what I do best, so winning was nice,” said Clowes.

“I knew I wasn’t going to be able to run a personal best time. My hamstring went at 9km in the Cardiff Bay race and this was my first chance to test it out after my rehab.

“I could feel it a little bit coming back, but it was okay in the end. I’m going to have a little run around in the Whitchurch 5K tonight and then I’ll be running in some more local races this summer as I build up to the Berlin Marathon.

The women’s race had a new champion as Bristol & West AC’s Charlotte Taylor-Green proved her switch from track to road looks to be a good one. A week after acting as a pacemaker in the London Marathon she held off the 2018 winner, Rachel Fenton, to win in a course record 34:44.

“That was only two seconds outside my personal best, which isn’t bad after running to half-way in London last week,” said Taylor-Green.

“Because I’d run in London last week I wasn’t sure how my legs were going to feel so I just wanted to come out and enjoy myself today. I felt pretty good and, having run my 10km PB in Brighton three weeks ago, I’m starting to become consistent on the roads.

“My coach, James Thie, suggested the switch from 800m and 1500m to the roads this year and it is all very new at the moment.”

Wales’ Kris Jones won for the second time in three years, leading a Dundee Hawkhill Harriers 1-2 ahead of James Donald, 14:26 to 14:31.

Central’s Morag Millar broke the course record with a PB of 15:49 ahead of Mhairi Maclennan with 15:55.

Adam Hickey won the men’s race in 14:14 from Ieuan Thomas, who regained the Welsh title after clocking 14:18.

Thomas was able to reverse the tables on Jon Hopkins, who had taken race victory 12 months ago.

Clara Evans has improved considerably over the last 12 months and a 72:52 posting in the Barcelona Half Marathon earlier this year has announced her as a serious contender among domestic competition.

Her winning time of 16:04 was enough for the title and the race win outright from Jade Williams in 16:22.

“I was happy with that,” said Evans. “I’ve been training with the Welsh camp in Albuquerque and was glad to see what kind of shape I was in.”

Hosts Wales were the victors in the Inter-Area match for both men and women. Wales had faced competition from the Midland Counties, North of England, Northern Ireland & Ulster and the UK Armed Forces.

ABP Southampton Marathon, Half and 10K, Hampshire, May 5

The UK hosted an organised app run in Chiswick Park, which was won by Owen Edwards with the virtual ‘catcher car’ finally catching him after he ran 33km. The women’s race was won by Sophie McKeeman who covered 32.1km.

In the global race, Ivan Motorin of Russia achieved 64.37km in Izmir, Turkey, to clinch the men’s title, while Nina Zarina of Russia took the global women’s title in Zug, Switzerland, covering a distance of 53.72km.

You can watch back live stream footage of the event here.

USATF Half Marathon Championships, Pittsburgh, May 5