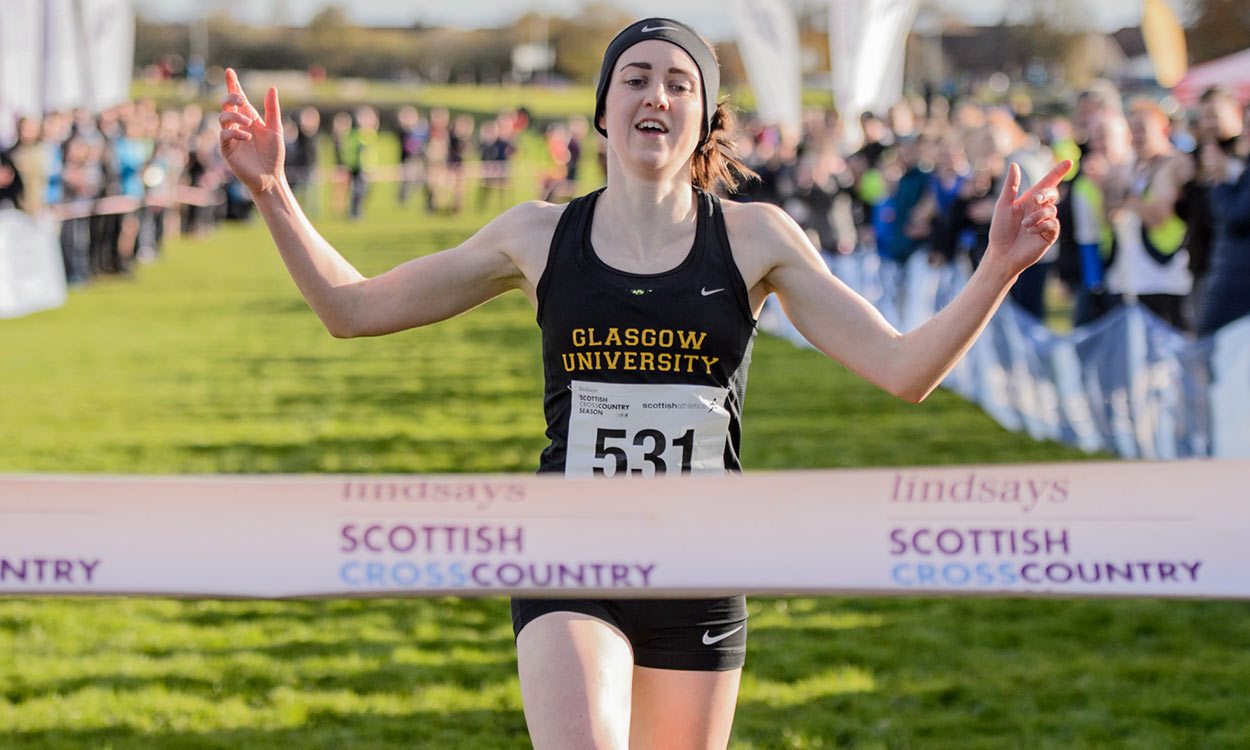 Double London 2017 finalist Muir – who was racing for the first time since finishing fourth in the 1500m and sixth in the 5000m at the IAAF World Championships – clocked 12:53 for the 4km course to finish clear ahead of Edinburgh Uni Hare and Hound’s Steph Pennycook with 13:47. Central AC’s Morag MacLarty was third in 13:50.

“I really enjoyed being out there racing again and loved the support around the course,” said Muir, who raced in the colours of Glasgow Uni to win her fourth title at this event in five years and will soon turn her attention towards the World Indoor Championships in Birmingham.

“Did I stretch the lead more on the second lap? I really couldn’t tell you – I was just trying to focus on my own run. I’ve only missed one training run all winter so far (despite university placements and course work in her final year).

“I’m getting everything I want to in and it’s been going really well. I keep plugging away. I felt in good shape here.

“It’s nice to win it again and now the indoor season is the next big focus because I want to perform well there.”

Just behind the top three, Anna Macfadyen took fourth place to win the under-20 gold medal and put a marker down for the Euro Cross trials in Liverpool.

It was another hugely encouraging day for the sport in Scotland. Numbers are up for these events and there were 411 finishers in the senior men’s 4km race, compared to a figure of 227 in 2014.

Central AC’s Boyek proved his class to take the win in that keenly-contested race.

Boyek won by four seconds as the battles raged a few metres behind him and that success led Central men home for three-in-a-row in the team race in this particular event.

Behind Boyek with 12:01, three athletes clocked 12:05, with Lachlan Oates of Shettleston taking the silver and Sol Sweeney of Glasgow Uni the bronze medal plus the under-20 gold. Aberdeen’s Michael Ferguson was fourth.

“It was good to win that and I knew reading the preview that there were some good names there and strong competition,” said Boyek.

“I just managed to get a bit of lead and then pushed it on when I could. I wasn’t sure what was going on behind me.

“After the injuries that I’ve had, I am determined just to put in a solid winter and that means some cross country – certainly over this kind of distance. The 4km was probably ideal and I will be doing indoors as well.

“I believe there is a 4x1500m race at the Euro Cross and I think GB are planning to send a team to that so hopefully winning here helps me stake a selection claim for that.”

Further individual and team results can be found here.