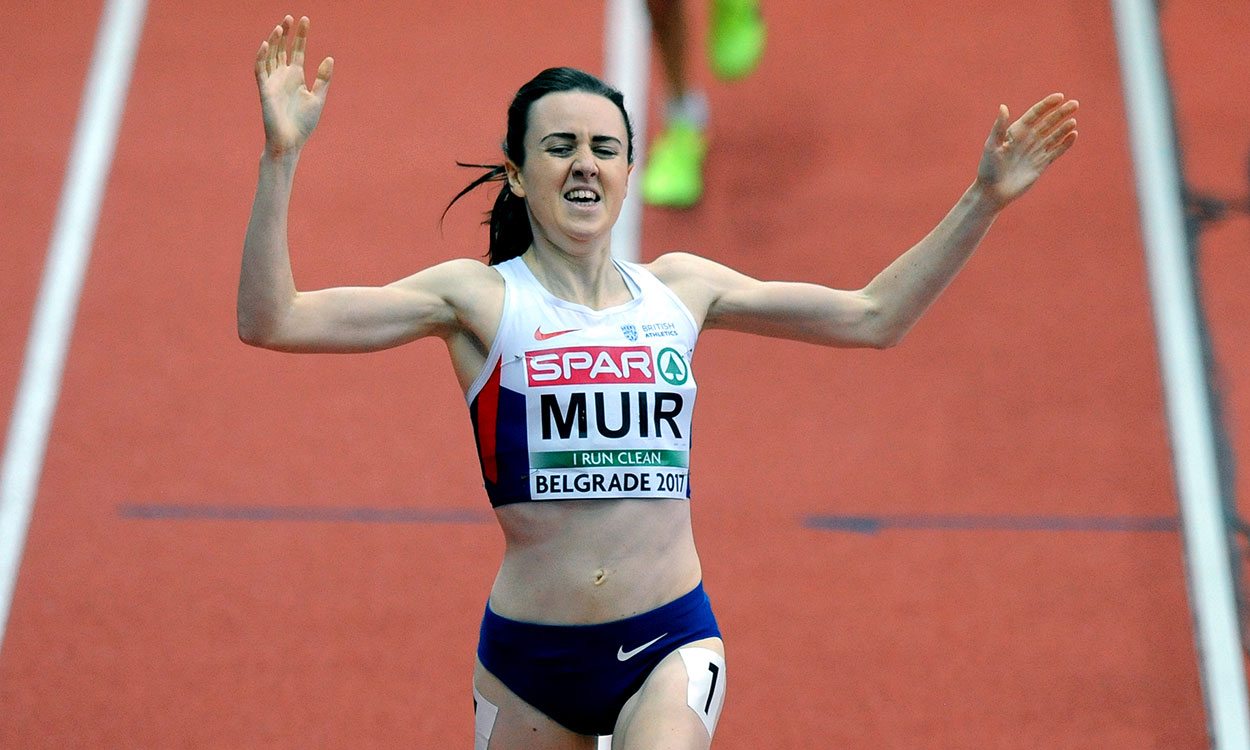 Laura Muir won her first major title in the 1500m with a superb piece of front running on the second day of the European Indoor Championships in Belgrade.

For good measure, her time of 4:02.39 was a British indoor record and championship best performance.

The early pace was initially slow but Muir shot ahead to led through 300m in 52.87 and 400m in 67.76. The tempo was now up to world-class and she covered the second 400m up to 800m in 64.66 with only Poland’s Sofia Ennaoui and Germany’s Konstanze Klosterhalfen able to keep pace with her.

“To get that medal – I’m so happy,” said Muir, who will return to the track on Sunday to contest the 3000m final. “I was actually quite relaxed because I knew what I had to do and I knew that I was stronger than a lot of the girls.

“I knew that if I got out pretty early then I’d be fine. I didn’t expect someone to be on my shoulder with 300m to go, but I just put the welly in and managed to come away with the win.”

Britain’s second gold medal of the night was won impressively in the 60m by defending champion Richard Kilty in a European-leading 6.54.

Kilty got a modest reaction time for him of 0.149 but he won clearly by half a metre.

Jan Volko of Slovakia was a clear silver medallist in a national record 6.58. The surprise bronze medallist was Austin Hamilton of Sweden.

Theo Etienne, who ran an impressive 6.59 in winning his semi-final, couldn’t replicate that and was fifth in 6.67. Andy Robertson was disqualified for a marginal false start (reaction time of 0.095). 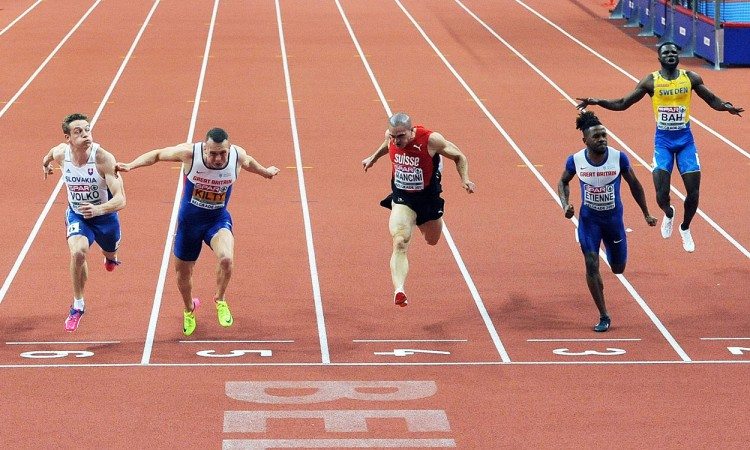 Tom Lancashire made a brave attempt to medal in an average quality men’s 1500m but lost third position in the last 120 metres to finish fifth in 3:46.57.

In the women’s 400m final, Lea Sprunger blasted the first lap but faded in the straight and fast-finishing Floria Guei won easily in a PB of 51.90.

World 400m hurdles champion Zuzana Hejnova took silver and a late rush by Justyna Swiety denied Laviai Nielsen the bronze in the last five metres. The young Briton had just passed Sprunger before she was passed by the Pole. Nielsen ran 52.79.

Pavel Maslak won the men’s 400m in an European-leading 45.77. It was his third successive title and the sixth successive year he has won a 400m title. He was ahead at 200m in 21.59, but on the outside, had to run wide on the penultimate bend before surging to victory.

Rafal Omelko took silver in a PB 46.08 while Liemarvin Bonevacia, who had tried to hold Maslak off at the break, set a Dutch record 46.26 in third.

In the heptathlon, morning leader Kevin Mayer of France consolidated his position with a 15.66m shot throw and after three events had a score of 2675. Ashley Bryant opened with a 14.36m, which he improved to a near PB 14.57m with his final throw. He retained second place with 2599 points as Adam Helcelet moved up to third with 2579 and Jorge Urena was fourth on 2550.

In the heptathlon high jump, Kristian Rosenberg was best with 2.13m but Mayer increased his overall lead with a season’s best 2.10m. Liam Ramsay was fourth best with a 2.04m jump though Bryant could only clear 1.98m.

The men’s shot was a superb competition and Polish teenager Konrad Bukowiecki destroyed the field with a huge world-leading 21.97m PB in the second round. Tomas Stanek set a Czech record 21.43m to take silver while world champion David Storl found a 21.30m throw only good enough for the bronze.

That latter jump prove sufficient for gold, but she confirmed her superiority by jumping a PB and world lead of 2.01m.

Olympic champion Ruth Beitia had a perfect record up to 1.94m but she failed her first two attempts at 1.96m. The Spaniard thus won her sixth European indoor medal, having previously won in 2013. Ukraine’s Yuliya Levchenko took bronze with a third time clearance at 1.94m.

Former world junior champion Morgan Lake had been eyeing a medal but after a good clearance at 1.85m, she could go no higher, and failed at 1.89m and ended up eighth and last of the finalists.

In the women’s pole vault, Olympic champion Ekaterini Stefanidi proved a class apart. She ensured the gold medal with a first time jump at 4.80m and backed that up with a 4.85m vault. Lisa Ryzih set a PB of 4.75m in second.

The women’s triple jump did see an European-leading 14.37m from Kristin Girisch. The German achieved it with her second jump and it was her only jump over 14 metres. It was a tight competition as she was closely pursued by Patricia Mamona’s 14.32m and Paraseki Papahristou, who had the better series but fell narrowly short.

Standards of the event are poor though as the championship record is 15.08m by Britain’s Ashia Hansen, set over 19 years ago.

Izmir Smalaj won a poor quality but exciting long jump. He took the lead on countback with a last round Albanian record of 8.08m to deny Michel Torneus, who had led for much of the competition.

In the women’s 800m semi-finals, Shelayna Oskan-Clarke ran intelligently and showed a determined finish to win her race in 2:03.09. Spain’s Esther Guerrero won the other semi final in 2:02.91.

In the men’s 800m semi-finals, Kyle Langford was in contention until the last 100 metres but had to settle for fourth in 1:49.23, with just the first three to advance to the final.

» Coverage of Saturday’s morning session action is here. Full results can be found here, with updates on the @AthleticsWeekly twitter feed