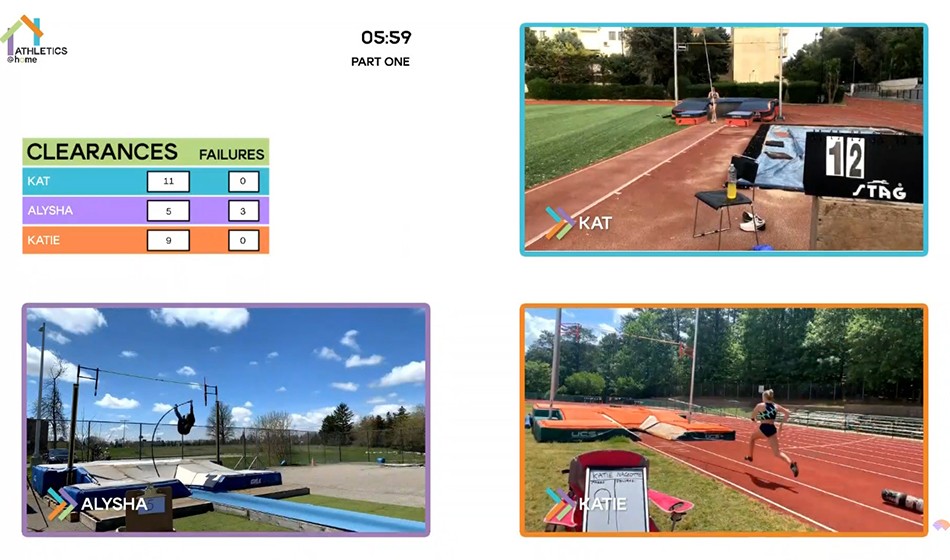 Battling hot conditions as well as her competitors in another continent, Katerina Stefanidi tested her mind and body in new ways to win the second edition of the ‘Ultimate Garden Clash’.

While traditional athletics action is suspended due to the coronavirus pandemic, Athens-based Olympic champion Stefanidi of Greece went up against two-time US indoor champion Katie Nageotte in Georgia and Canada’s Commonwealth champion Alysha Newman in Ontario as they attempted to clear a 4.00m bar as many times as possible within 30 minutes.

Following the same remote format as the men’s competition two weeks before, Stefanidi achieved a total of 34 clearances in 39C heat to claim victory ahead of Nageotte with 30 successful attempts and Newman with 21.

The men’s competition had ended in a tie between Mondo Duplantis and Renaud Lavillenie as the current and former world record-holders both cleared a 5.00m bar 36 times each, while two-time world champion Sam Kendricks managed 26 clearances.

After the women’s competition there were calls for Stefanidi to take on the men’s event winners in a battle of the champions.

“I will do it, but I’m going to need like three weeks to recover from this!” laughed Stefanidi, who was vaulting back in the same city where she first cleared 4.00m 16 years ago.

The competition was split into two 15 minute sections with a five-minute break. At the end of the first half, Stefanidi led with 19 clearances ahead of Nageotte with 16 and Newman with 12, with Stefanidi one up on Duplantis at that stage of the men’s competition as he led at half way with 18.

“I wish it was a little cooler because I had issues with my grip because it was so hot, so that definitely added some seconds to every jump.”

On the mental and physical aspects of such a test of endurance, Stefanidi added: “We noticed that it is a great way to shut our brains off. Pole vaulters struggle with mental blocks where we won’t take off the ground. This is a great way and a great game to get you to get off the ground because you have to shut your brain off and just make the bar. Sometimes you need to just do that in pole vault instead of thinking of too much.

“I am a bit tired, for sure. I was a bit surprised that my upper body got so tired, I thought that my legs would get tired. I was definitely out of breath. It was a challenge for me in many different ways. It really was a great idea by Renaud, it put so many different elements together – endurance, speed endurance, power, speed, the technique.”

Nageotte was also vaulting in challenging hot conditions and said: “I enjoyed it up until the second half of the second half! The humidity here is probably comparable to the heat in Athens. But it was about as much fun as you can have in an endurance competition.”

While for Newman in Canada, it was the cold and wind she had to deal with.

“This was for everyone tuning in and watching,” she said. “We want to educate people on pole vault. We want people to see what we do day in, day out. Just show them how physical it is and how mental it is. It’s such a precision sport.”

A report on the men’s event can be found here.