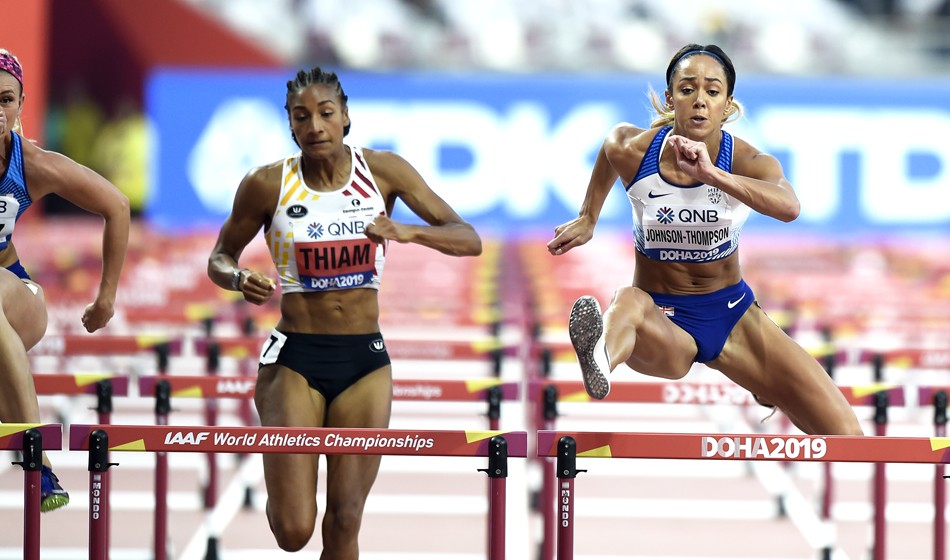 Briton produces personal bests to put herself in pole position ahead of Nafissatou Thiam, while Damian Warner leads the way in decathlon

Katarina Johnson-Thompson made a flying to start to her world championships heptathlon campaign, finishing day one in charge with a 96-point lead over defending champion and chief rival Nafissatou Thiam thanks to a range of impressive performances over the opening four events.

The Briton produced big personal bests in the 100m hurdles and the shot put, a championship high jump best and clocked a season’s best 200m on her way to a total of 4138 points, with Thiam sitting on 4042 and American Kendell Williams adrift in third on 3855 with three events to go.

The Commonwealth champion clearly surprised herself in the day’s first event, wearing a look of almost disbelief when taking two tenths of a second from her PB in clocking 13.09 (+0.6 m/sec) in heat two of the 100m hurdles, the same race in which Thiam clocked a season’s best 13.36.

Williams wrote her name into the history books by running 12.58 (0.4), the fastest ever time recorded for 100m hurdles in the world championships heptathlon.

When it came to the high jump, Johnson-Thompson and Thiam could barely have been more evenly matched. Both entered the competition at 1.83m and made virtually identical progress. When they reached 1.95m, Johnson-Thompson went over at the first time of asking, while Thiam needed a second attempt.

When the Olympic champion failed at each of her efforts at clearing 1.98m, it left the door slightly ajar for her opponent, though Johnson-Thompson was ultimately unable to land a successful jump at the height either.

It was in the shot, however, where a big move was made. The throws is usually the major difference between the two but Johnson-Thompson has closed the gap.

Thiam threw furthest of all the competitors with a best of 15.22m, but that was some way short of her 15.52m PB, while Johnson-Thompson picked the perfect time to destroy her personal best.

Johnson-Thompson is the quickest in the field with a personal best of 22.79 and she clocked a season’s best of 23.08 for the fastest time of the night.

4138 is 104 points up on her personal best score at this stage, while it’s the fourth-best opening day score in history, one point better than Thiam’s best ever day one tally.

“I am really happy about my season bests and my performance today,” said the world indoor pentathlon champion. “I never think of these things like where I am after the first day. I know I am in a good shape, I am where I needed to be and the way I competed.

“Gold – why not? I am in shape and position to do it but you never know what can happen on day two. But I have worked hard on my second day, so anything is possible.”

.@JohnsonThompson on her shot put PB: "I've never seen a below 14m throw celebrated so much by my team & me!" Had it been coming in training? "No! I'm not going to lie. But my training parter Kevin is a third-round specialist, so maybe it's an element of that in training." pic.twitter.com/vrtorWp1KF

Warner leads the way after decathlon day one

Damian Warner leads the decathlon at the end of day one from fellow Canadian Pierce LePage, with world record-holder Kevin Mayer of France in third.

Warner, the Gotzis champion this year and winner of two world championship minor medals in the past, scored 4513 points in the opening five events with Commonwealth silver medallist LePage scoring 4486 and Mayer close behind on 4483 and Lindon Victor of Grenada on 4474.

The shot was a great event for the world record-holder, though, as he threw 16.82m for the best mark of the competition as Warner threw 15.17m and LaPage only 13.21m.

Maicel Uibo of Estonia made good points in the high jump as he leapt 2.17m – the best mark in the competition by 6cm. Behind, Warner jumped 2.02m and Mayer a season’s best of 1.99m although the Frenchman was holding his knee after the contest.

There was bad news for Britain’s sole representative, as Tim Duckworth was forced to pull out on the day of the competition due to an injury warming up.

“I am absolutely gutted to have withdrawn myself from my first World Championship decathlon,” said Duckworth, who was hoping to qualify for the Tokyo Olympics this week. “It was not an easy decision but I did not want to start the competition and not be able to finish.”