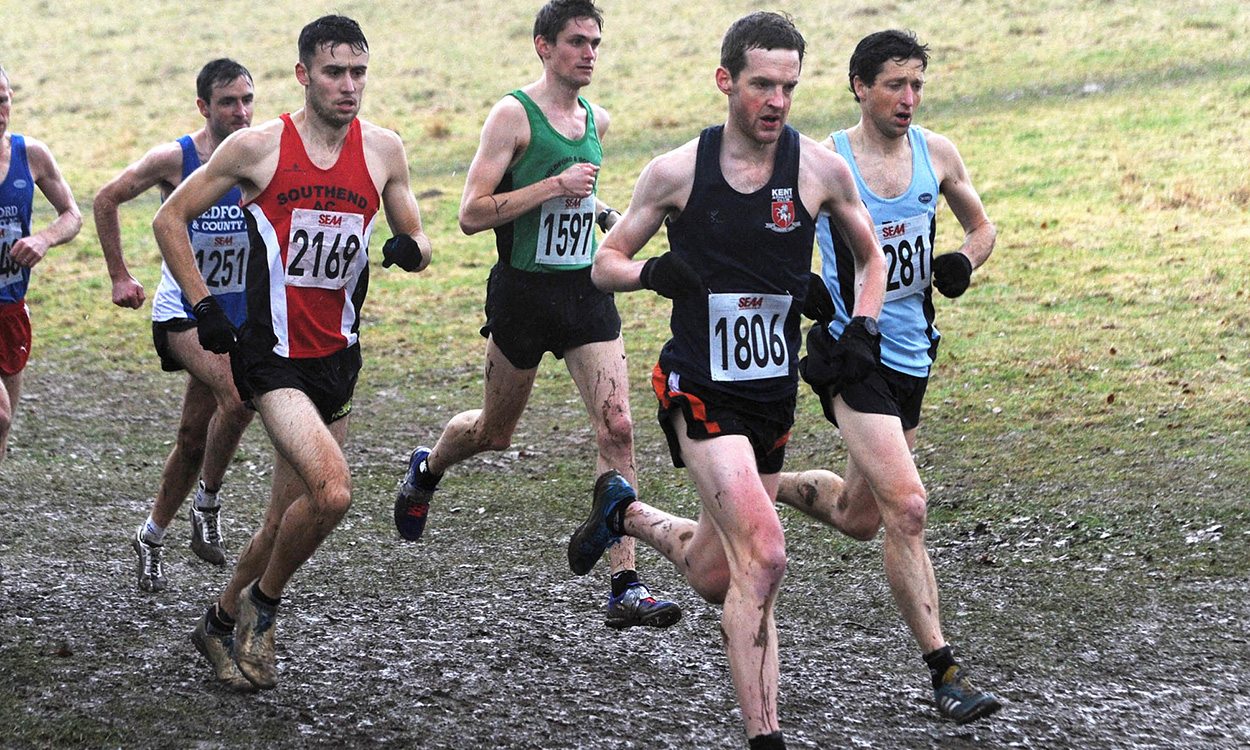 A round-up of ECCA area championships action in Brighton, Nottingham and Leeds

Gilbert, who has previously been third at Parliament Hill, had the race of his life at the age of 37 and he won by just five seconds from Adam Hickey.

Remarkably, an ankle injury meant he had to miss training during the week and thought he might miss the event.

His previous record would not have inspired confidence as he was 10th in 2015 when it was last held here and seventh in 2012.

He started fast in very wet conditions and soon had a good lead. Former junior champion Hickey looked to be reeling him in on the second lap but Gilbert’s strength on the hills proved decisive.

Hickey, coached by former London Marathon winner Eamonn Martin, never gave up and showed a glimpse of the form that saw him get an European top 10 in 2014 to take second.

Kent had a good championship as apart from Kent AC’s Gilbert’s win they were further represented by Max Nicholls. The 21 year-old, who won the junior title in 2016, had a strong final lap to win the bronze.

He was the only Tonbridge AC athlete entered as the club boycotted the event as a team.

The absence of the 12-stage champions left the way clear for Bedford to win the team event from Highgate and Serpentine.

Law’s win was more expected after a superb sixth in Edinburgh. The 21-year-old Kingston and Poly athlete, who has previously finished second in both the under-20 and under-17 race, run a strong final mile to eventually win by 22 seconds.

Emily Hosker Thornhill, who had won the previous year by a second, moved up from sixth with a mile to go to just pip Charlotte Christensen, who was Law’s major challenger most of the race.

National under-17 champion Amelia Quirk of Bracknell fought off a strong challenge from Niamh Brown to win the under-20 race with Jess Keene third.

Bodywork’s Bethany Cook, who won the under-13 race last year, dominated the under-15 race this time to win by 44 seconds with a very strong second lap.

Cornwall’s Grace Brock dominated the under-17 race to win by 36 seconds from locally-based Almi Nerurkar, who is now focusing more on triathlon.

The under-13 women’s race was a superb battle with Ipswich’s Ruby Vinton just pipping Charlotte Dewar on the line.

Almost as close was a top quality under-17 race where Thomas Keen of Cambridge and Coleridge got the verdict by a single second after catching long-time leader Lachlan Wellington in the straight.

Last year Wellington lost by a single second to ESAA and Inter-Counties champion Zak Mahamed, who could only finish third in what was probably the best quality race of the day.

The under-20 race was also close with Bedford’s Elliot Dee excelling to just hold off fast-finishing Jeremy Dempsey of his former club Shaftesbury. Dempsey would have potentially been even closer than the two second margin had he not had a heavy fall on the first lap.

Mohamed Ali of Ealing Southall and Middlesex was a highly impressive winner of the under-15 race which started the day’s proceedings in much better weather.

Poole’s William Rabjohns won the under-13 boys race in style.

Three athletes retained their titles at a wet and miserable Wollaton Park, where honours were spread around the midland clubs, Martin Duff reports.

Alex Brecker completed a hat-trick of senior men’s victories, while Tom Mortimer held on to his under-20 men’s title and Libby Coleman retained her under-17 women’s.

There was nearly a fourth retention but Juliet Potter, who had suffered a midweek cold, forfeited her senior women’s title to Kate Holt after making much of the early running.

Writing on Twitter after the event, Holt, who had also suffered recent illness, said: “Overcome three bouts of illness and got myself on the start line with two weeks of decent training. No idea how this happened but I’m finally the senior Midland cross country champion!”

Yeeeees. Overcome 3 bouts of illness and got myself on the start line with 2 weeks of decent training. No idea how this happened but I'm finally the senior Midland cross country champion! pic.twitter.com/sQeX57rxie

As well as taking both senior titles, the City of Stoke club had a good day as Connor Bentley (under-17 men) and Gianni Loska (under-15 boys) also came out on top of their respective races.

Team honours went to Charnwood with five team wins (U17W, U15B, U17M, U20M and senior women). They were also the only club to finish a team in all of the men’s and boys’ races, that annexing The Fox Cup.

A closely contested senior men’s team championship went to Notts ahead of Birchfield and Tipton.

Numbers seemed to hold up well in the senior events, but participation and entries for the age group races were considered to be down on previous years.

Carl Avery of Morpeth had a close head-to-head contest in the men’s race with Matthew Bowser of Lincoln Wellington, with the Morpeth man going on to win his first Northern title, Roger Norton reports.

The two opened up a gap early in the race with Hallamshire’s Steve Bayton leading the chasing group. On a downhill stretch early on the second lap, Bowser stole a 20 metre lead and looked full of running as Avery struggled with stitch.

Later, it was Bowser’s turn to struggle, suffering from cramp, an issue that troubles him regularly. He could not respond when Avery caught him for a well deserved, if somewhat unexpected, victory.

Bayton, isolated throughout, stuck to his task and was not threatened for the bronze medal.

Sale won the team race from Leeds City and Sale.

Mhairi Maclennan, an Edinburgh-based Scottish runner whose English club is Morpeth, scored an impressive win in the women’s race.

Preferring the Northern to the Scottish District races, Maclennan was always in the lead or thereabouts and once she put the pressure on, no one could match her.

Behind her, Lauren Howarth was delighted with her silver medal in what was her first race since September.

Georgia Taylor-Brown was safe in third place, while defending champion Claire Duck had to settle for seventh this time. However, Duck’s Leeds City team successfully defended their team title by just two points from Sale with the consistent Rotherham squad taking bronze.

Age group winners were Emile Cairess (Leeds City) and Francesca Brint (Sale) in the under-20 races, Rory Leonard (Morpeth) and Ella McNiven (Liverpool) in the under-17 events, Archie Lowe (Middlebrough) and Sian Heslop (Macclesfield) in the under-15 category and Joshua Blevins (North Shields Poly) and Holly Weedall (Vale Royal) in the under-13 races.