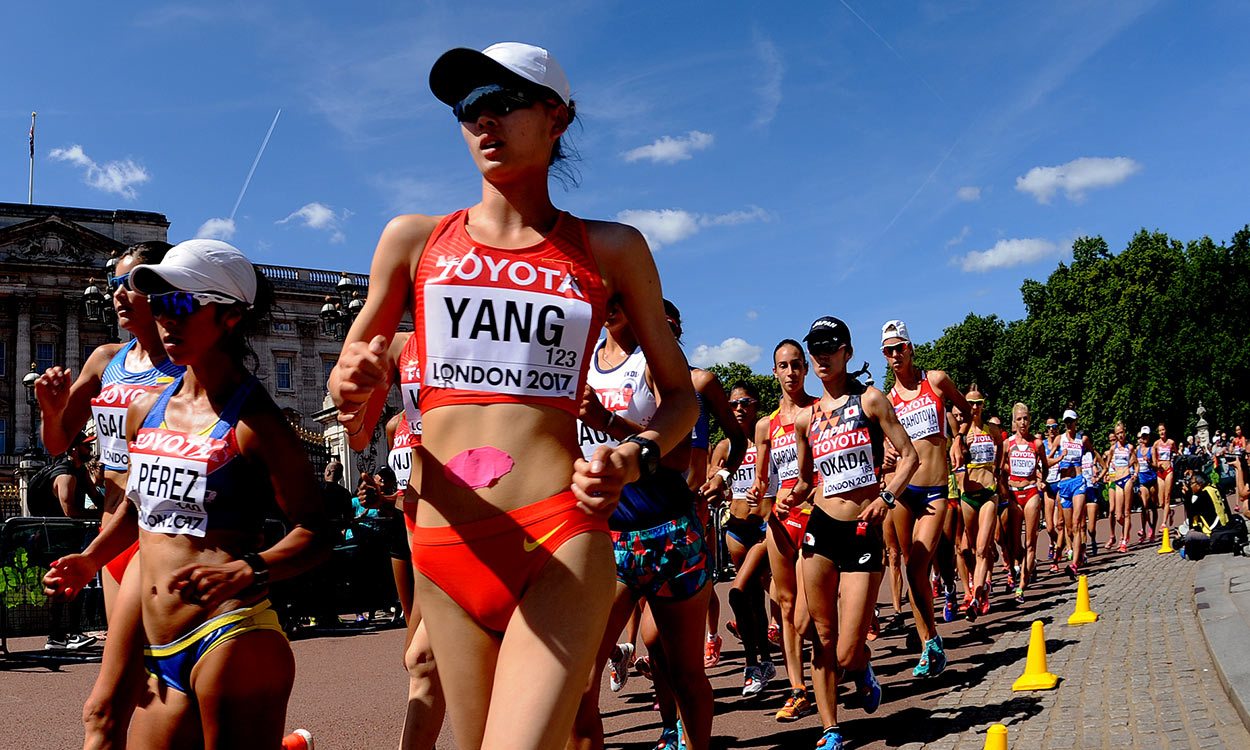 Following the annihilation of the field and total domination of Yohann Diniz in the men’s 50km, the women’s 20km was a much more competitive and dramatic event at the IAAF World Championships.

With crowds building in the London sunshine, the race went down to the final metres and featured a very late disqualification affecting the medals.

The race was won on the splendid 2km lap on The Mall by the 21-year-old Jiayu Yang. The Chinese athlete didn’t have great experience and didn’t make the Chinese team at Beijing or Rio.

All her three previous races this year had been in China and she was only the Chinese number three on times this year.

Her two previous international races of note were being second junior in the 2014 World Cup and seventh in the 2016 World Team Championships. It was hardly the prospective form of a future senior world champion.

That did not matter in the end as her 1:26:18 was a PB and won the title by a single second. Despite a slow start her time was only half a minute down on the Championships best.

At 5km, 21 were in the leading group with Olympic fourth-placer Italian Antonella Palmisano officially ahead in 22:22 which is 1:29 pace.

The increase in speed continued and at 15km it was down to five with Yang on 1:05:33 ahead. That split was a very strong 21:23 along with only Lyu, Gonzalez, Palmisano and Brazilian South American record-holder Erica de Sena.

They had a five second gap to Colombian Sandra Arenas (1:05:39) with then a wide chasm to Portugal’s Ana Cabecinha leading a pack in 1:06:11.

Over the last 5km, it got quicker still and de Sena, who was sixth in 2015 and seventh in the Olympics had to let go.

On the finishing straight it was Yang who looked in control and ahead but Gonzalez never gave up and was just a second down at the finish.

Poor Lyu thought she was on her way to a bronze but less than 20 metres before the line a judge barred her way and she couldn’t go through the finish.

“I feel really excited,” said the winner. “In the final 2km I decided to go for the final move. I felt smooth during the race. Our coach made arrangements about tactics and we did really great.

“I come from Nei Meng Gu province (near the Mongolian border). I started race walking at the age of 14. I hope to be the future of race walking in China.

“I feel sorry for Lyu. Maybe she’ll get to win a competition soon.”

52 finished with six disqualified and two dropping out.