Jemma Reekie among winners on final day of European U20 Champs 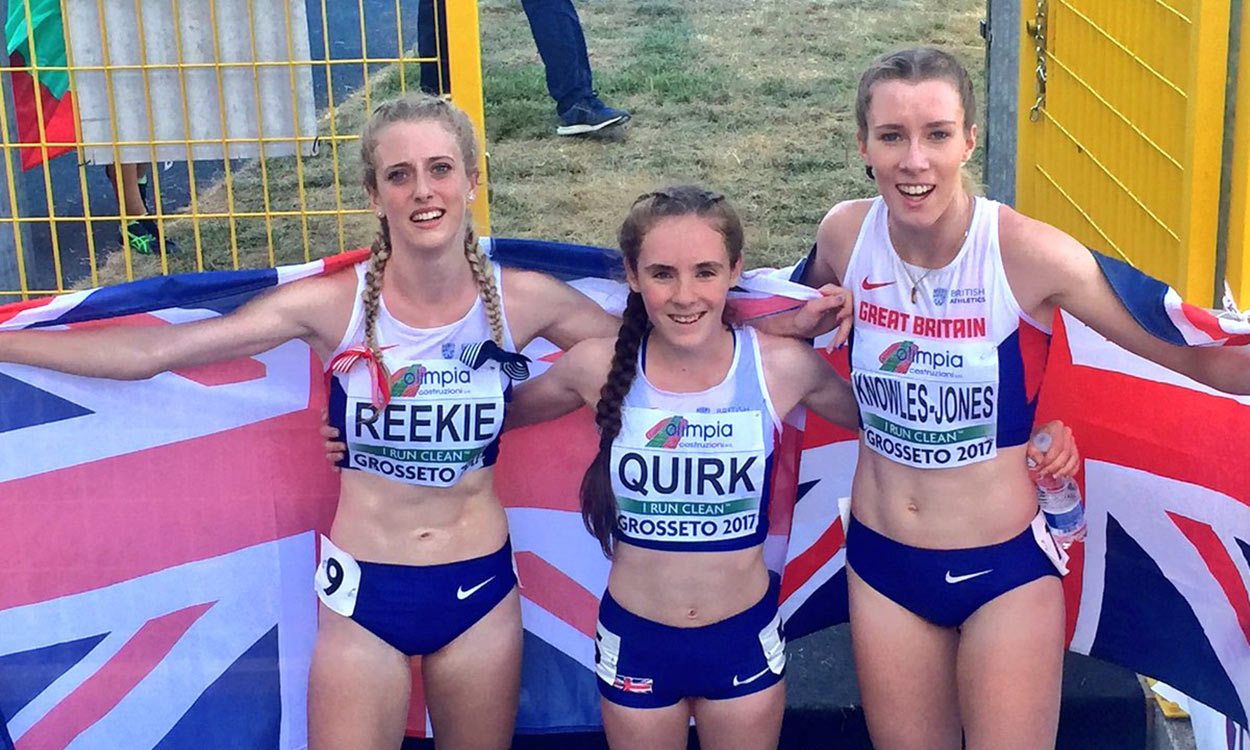 The Great Britain team equalled its best-ever medal haul at a European U20 Championships, winning a total of 19 medals – five of them gold – in Grosseto, Italy.

Among the winners on the final day of competition was Jemma Reekie as the 19-year-old won the 1500m by three seconds in 4:13.25, with her team-mate Harriet Knowles-Jones third in 4:17.53 and long-time leader Amelia Quirk fourth in 4:19.23. Silver was secured by Bulgaria’s Liliana Georgieva in a 4:16.73 PB.

The men’s 800m saw a silver for Markhim Lonsdale as he ran 1:48.82 to finish 0.12 behind winner Marino Bloudek of Croatia, while George Evans threw 59.05m for bronze in the final round of the discus competition won by Poland’s Oskar Stachnik with 62.01m.

Behind the winning German team (43.44), which had earlier broken the world under-20 record with 43.27 in qualifying, a GB women’s 4x100m quartet of Ebony Carr, Alisha Rees, Maya Bruney and Olivia Okoli combined to run 44.17 for bronze behind France and ahead of Ireland. The world record-breaking German team had included Katrin Fehm, Keshia Kwadwo, Sophie Junk and Jennifer Montag.

Bruney had also already won individual 200m gold and she was back on the track again for the women’s 4x400m relay, where she claimed a third medal, helped by her quickest leg of the race of 51.7. The team – featuring Mair Edwards, Bruney, Ella Barrett and Hannah Williams – bagged bronze in 3.33.68 behind teams from Ukraine and Germany.

“I would never have thought I’d come here and win three medals, it’s insane!” said Bruney. “What a team to do it with as well – it’s been an unbelievable journey. What a way to end the champs.”

After the world record by his team-mates in the women’s 4x100m, another world under-20 mark was broken by a German athlete as Niklas Kaul was impressive in the decathlon, achieving 8435 points to get gold ahead of Estonia’s Johannes Erm (8141) and Karel Tilga (8002).

“I’m really happy, I was not expecting to go over 8400 points – it’s just amazing,” said the winner. “This is the best way to end the season.”

While Kaul’s previous best had been 8162 points, the previous world junior record of 8397 had been set with senior implements, while the German’s marks were with junior implements.

Sweden’s Armand Duplantis was another athlete to impress in the pole vault as he cleared 5.55m on his first attempt and just his second vault of the competition before having the bar raised to 5.65m. Clearing that on his third attempt, Duplantis broke Maksim Tarasov’s championship record of 5.60m set in 1989 before attempting 5.80m.

Despite his fall in the 1500m on Saturday, Norway’s Jakob Ingebrigtsen returned to the track to take the 5000m title and he was back again the next day to add 3000m steeplechase gold, the 16-year-old clocking 8:50.00.

Czech Republic’s Michaela Hruba cleared 1.93m to win the high jump before three attempts at what would have been a championship record of 1.96m, while France’s Martin Lamou leapt a European under-20 lead and PB of 16.97m for triple jump gold.

At the end of the four-day championships, Germany topped the medal table with five golds, seven silvers and one bronze. GB had more medals with 19, and matched Germany on golds, but had one less silver and so the team was pipped to the top spot.