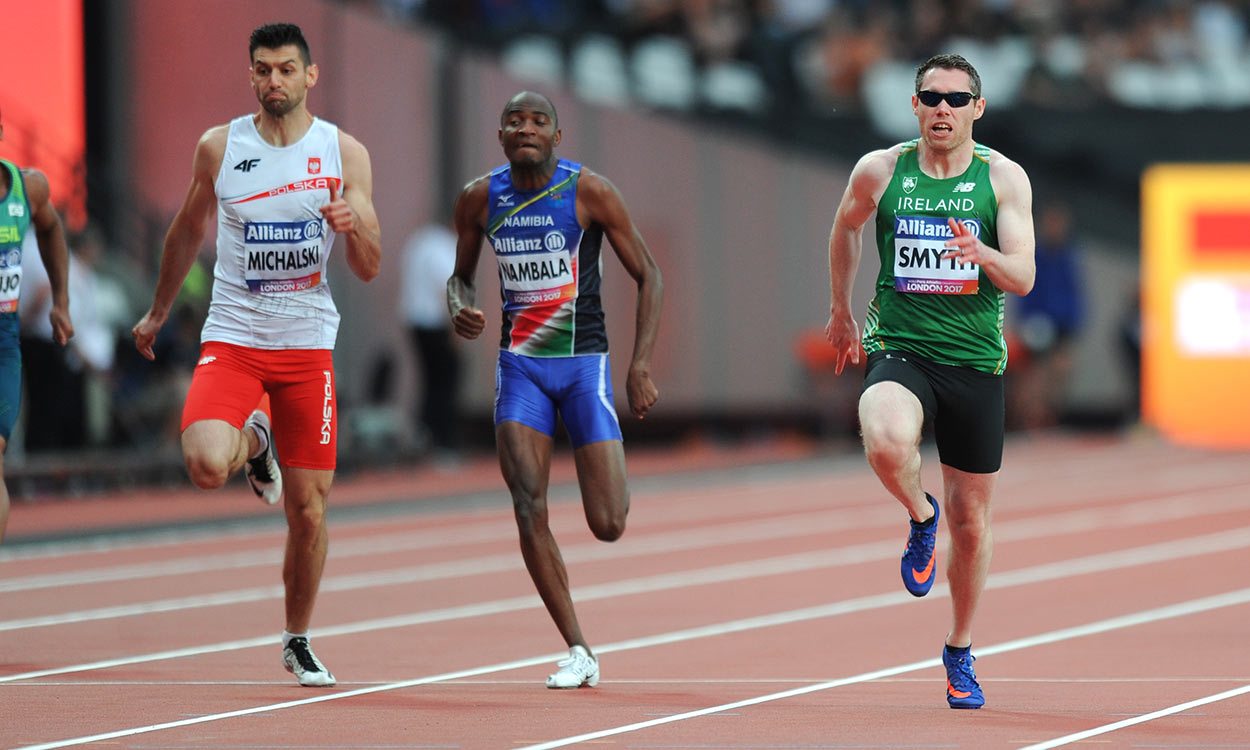 Ireland’s Jason Smyth took his haul of global gold medals to 10 on the fifth evening of World Para Athletics Championships in London, completing yet another sprint double on Tuesday.

The 30-year-old has dominated the T13 events and is unbeaten in his entire para-athletics career, with that superiority continuing in the UK capital.

After winning Sunday’s 100m in 10.63, Smyth returned to take the 200m title in 21.40 clear ahead of Namibia’s Johannes Nambala and Poland’s Mateusz Michalski.

“I’m over the moon,” said the world’s fastest-ever Paralympian. “With Sunday, having the 100m, I didn’t quite get to relax because I knew I had to be out the next day. But now I feel like I can relax. The relief, the pressure is gone. Now it’s just about trying to let it sink in.

“It’s just incredible to be here,” Smyth added. “I’m very grateful to be in London again because the Paralympic Games was incredible and these are without doubt the best world championships we’ve ever had.”

The visually-impaired athlete claimed a sprint double at the 2013 world championships in Lyon but was unable to defend both titles in Doha two years later, for a good reason, as he returned home to be with his wife Elise for the birth of his daughter, Evie.

“It makes it more special,” said Smyth, reflecting on having his family in the crowd in London. “Now I’m not just running for me, I’ve got my family.

“I want my daughter to be proud of the things I’ve achieved but I also want her to look at me and think ‘if my dad can achieve those things, I can achieve the things that I want to in life’.

“It’s everybody – in life we put barriers up and we put boundaries up and I think this is what the sport does incredibly well, you can achieve whatever you want, it does not matter. If you really want to do it, you really want to work hard at it, anything is achievable. That’s what I like to try and show people.”

.@smyth_jason on doing the double and the support of the @London2017 crowd… Report: https://t.co/6j1gzfKlq4 #London2017 pic.twitter.com/IFyTqLBw5A

Also on Tuesday there was another impressive performance by USA’s Isaac Jean-Paul as the visually impaired high jumper improved his own T13 world record three times to win with 2.17m, adding seven centimetres to his previous best recorded in June.

The 24-year-old, who only discovered para sport earlier this year, was understandably delighted with his evening in London and it was a US top-two as Tyson Gunter secured joint silver with his clearance of 1.88m.

The world record also fell and another gold was gained for USA in the women’s T20 400m as Breanna Clark improved her own mark to 56.33 to add the world title to her Paralympic gold from Rio.

“To break the world record, it is awesome. It is better than Brazil,” said the 23-year-old, who is the daughter of Rosalyn Clark, winner of 4x400m silver as Rosalyn Bryant at the 1976 Olympics in Montreal.

There was a close finish in the T54 200m as Tunisia’s Yassine Gharbi beat Kenny van Weeghel of Netherlands with a 24.86 championship record to 24.92, with GB’s Richard Chiassaro finishing just outside the medals, clocking 25.12 for fourth. His team-mate Nathan Maguire placed sixth in a PB 25.86.

Canada’s Brent Lakatos won his second gold of the championships, with the wheelchair racer, who is married to GB’s T44 long jump champion Stef Reid, claiming the T53 400m title in a championship record of 47.56.

China’s Zhou Guohua competed a T11 sprint double, winning the 100m title in 12.16 after her 200m success on Monday, with GB’s double Paralympic champion Libby Clegg missing through injury. Another gold for China was claimed by Huimin Zhong in the F11 javelin as she threw a championship record 26.05m. Fresh from winning 100m gold, Zhou also contested the javelin and finished fifth.

Japan’s Tomoki Sato (59.47) and USA’s Raymond Martin (58.58) had both broken the T52 400m championship record in their respective heats but after losing that mark to Martin earlier on in the day, Sato claimed it back in the final as he clocked 56.78 to take the title ahead of his American rival with 57.31.

There was drama in the men’s T11 400m as France’s Timothee Adolphe fell while in the lead just before the finish, with Brazil’s Daniel Silva, who was just behind him, also pulling up just before the line. Both visually impaired sprinters, racing with guide runners, were disqualified, with gold going to Spain’s Gerard Descarrega Puigdevall as he clocked 51.46.

Akeem Stewart of Trinidad and Tobago won the F44 javelin with his world record-breaking throw of 57.61m in the second round from standing, while the men’s F57 javelin competition was won by Amanollah Papi after his personal best throw of 44.87m to lead an Iranian 1-2-3. Ukraine’s Roman Pavlyk claimed T36 long jump victory after his PB leap of 5.63m.

GB’s Sabrina Fortune unleashed her best throw in the first round of the F20 shot put for athletes with an intellectual impairment and her 12.29m placed her sixth in a competition won by Poland’s Ewa Durska with 13.18m. Back on the track, USA’s Deja Young won the T47 100m title in 12.39 as GB’s Polly Maton placed fifth in 13.04.

Morocco’s Rio Paralympic medallist Mahdi Afri came close to the T12 400m world record with his championship best mark of 48.60 to get gold.

The morning session had seen Luke Sinnott finish fourth in the T42 long jump on his GB debut.

After fouling his first three attempts, the former army captain, who lost both his legs in an explosion in Afghanistan, had the jump of his life in the fourth round as he soared out to a personal best of 6.15m.

“After a few bad jumps I realised that I needed to rethink my strategy and the turning point for me was getting the crowd involved,” Sinnott said.