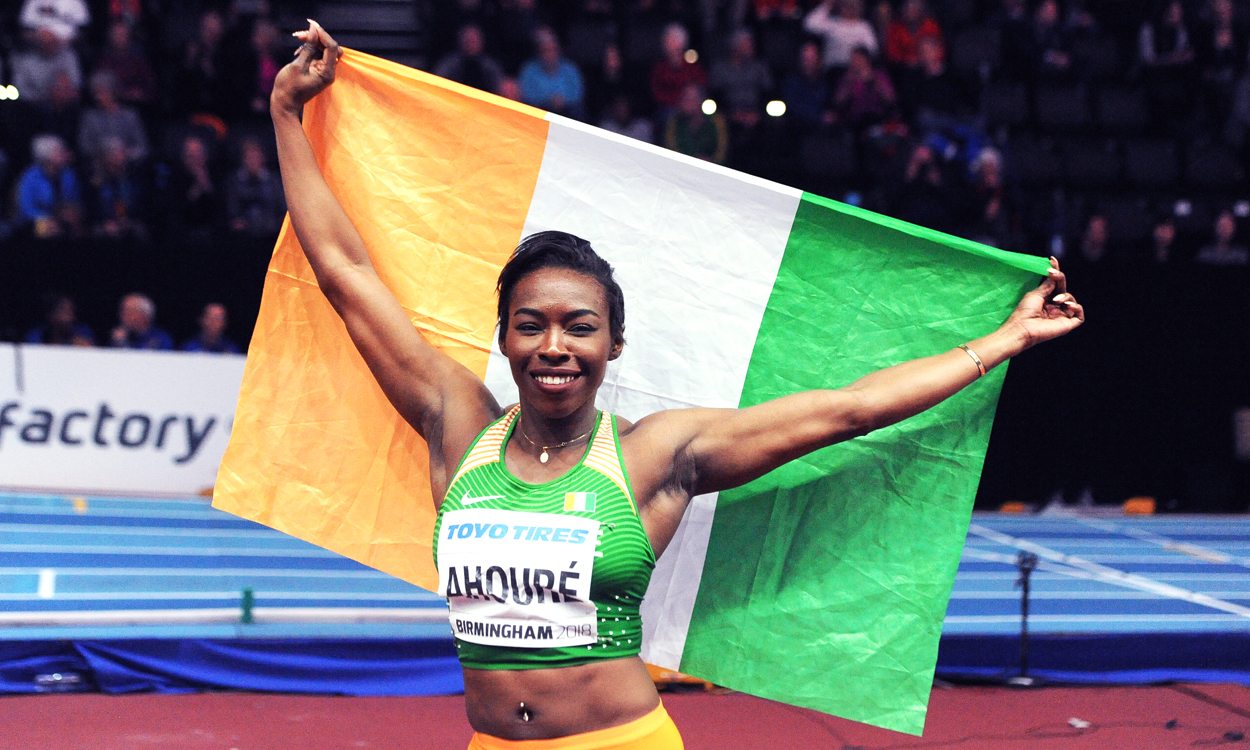 The women’s 60m final saw history made in Birmingham as Ivory Coast won not only their first ever world indoor gold with Murielle Ahoure but they also took the silver medal with Marie-Josée Ta Lou.

Ahoure, who was second in this event in 2012 and 2014, got a modest reaction time of 0.162 but she soon opened up a clear margin and flew over the finish in a scintillating world lead of 6.97.

No one has run faster this century and it moved her to equal sixth all-time along with Laverne Jones-Ferrette, who ran the time in 2010.

“I’m so happy,” she said. “I’ve trained so hard for this and that medal is for my coach and my team that have trained me so hard.

“The most important thing I knew would be getting out of the blocks and executing my race, focusing on my lane. It’s huge to get gold and silver. The Ivory Coast is on top, we’re so happy and hopefully soon we’ll be able to take over the whole podium.

“It’s amazing. We made history. It’s a blessing.” – Murielle Ahouré after leading an Ivory Coast one-two in the 60m ahead of Marie-Josée Ta Lou at @wicbirmingham2018. Check out the race report on our website now #iaafworlds #wicbham2018 #murielleahoure #60m

“This last year has been so difficult with my father (passing away),” she added. “I knew he was watching from up there. I was talking to him before the race, saying ‘please Dad help me in the race’. I couldn’t get a gold medal when he was alive.”

Just under a metre back, her team-mate Ta Lou edged Swiss surprise Mujinga Kambundji as both were timed at 7.05 with five thousandths between them when officials examined the photo finish.

Kambundji was delighted with her first global medal.

The big stars of outdoor sprinting, Olympic double champion Elaine Thompson and world 200m champion Dafne Schippers, had to settle for fourth and fifth in 7.08 and 7.10.

You could argue the remaining three were lucky to be there, benefitting from a lop-sided semi-final draw.

Ahoure had won the first semi in a then world-leading 7.01, clearly ahead of Thompson’s 7.07 with Schippers’ 7.09 only good enough for a fastest loser spot.

The previous world-leader, USA champion Javianne Oliver, ran 7.10 for fourth and European champion Asha Philip ran a fast 7.13 but her fifth place meant she was out even before the other two semi-finals were run.

The Briton would have qualified easily if she had been drawn in the other semis. She was obviously not happy and did not speak to the media afterwards.

Ta Lou won the second semi in 7.08 with second place unable to be split even when they went down to thousandths of a second.

Michelle-Lee Ahye and Remona Burchell both ran 7.145 and it meant Oliver was unable to advance as a fastest loser, despite only four athletes going quicker than her in the semis, as they had to advance Lee-Ahye and Burchell together.

The final semi was won by Kambundji in 7.10, well clear of the fastest heat winner from the morning Carolle Zahi who was timed at a much slower 7.17.

Bianca Williams finished a non-qualifying sixth in a PB 7.26.

She said: “I came in with no expectations as it was a late call (replacing Daryll Neita in the GB team) but it always sucks when you don’t reach a final. You are so close, so it is always annoying.

“A personal best is all right but I’m not totally happy. I had a niggle, that’s why I missed Glasgow, so each day is a work in progress. If I hadn’t had that, I may have run even faster so there is some frustration there.”

In the women’s 60m hurdles heats, Kendra Harrison of the United States made her intentions clear from the start, clocking the fastest first round in the history of the World Indoors. The world 100m hurdles record-holder ran 7.77 ahead of Ukraine’s Hanna Plotitsyna with 8.11 in heat four, while Norway’s Isabelle Pedersen ran 7.93 to win heat two.

Australia’s world 100m hurdles champion Sally Pearson and USA’s Christina Manning both clocked 7.96 to progress along with a third American – national record-holder Sharika Nelvis, after her run of 7.97.

GB’s Marilyn Nwawulor missed out on a semi-final spot by just 0.02 as she clocked 8.22 for sixth in her heat, while her team-mate Megan Marrs, the British champion, was also sixth in her heat in 8.28.

Marrs is the first Northern Ireland woman to compete in an indoor international championships for 30 years, with the last athlete to achieve it being high jumper Debbie McDowell, Marrs’ mother.

Dibaba and Muir back in action

The women’s 1500m heats opened with a clash between two of the 3000m medallists from the night before.

It was fast as Genzebe Dibaba won in 4:06.25 from Laura Muir’s 4:06.54 as they bagged the only two automatic qualifying spots.

“That was good. I obviously wanted to get that top two spot and that was a tough heat with Dibaba in it but I got the job done so I’m really happy with it,” said Muir. “Today I’ve been eating, seeing my physio and just relaxing as much as possible.”

The second heat was slower with Kenya’s Beatrice Chepkoech winning in 4:09.12.

Eilish McColgan was never in the battle for a qualifying spot and finished sixth in 4:13.32.

“It is frustrating because training has been going better than ever,” she said. “I can’t do anything now, I just have to get back into training and build towards the Commonwealth Games. That is the next big goal and I have a month to get myself right. Hopefully things go up from here.”

The final heat was even faster than the first and all the first four ran quicker than Dibaba.

Giles made a bold move on the final lap and was rewarded with qualification for Saturday’s final. Favourite for the final, though, will be Adam Kszczot, the Polish runner who is undefeated in 2018 and who eased to victory in his semi-final in 1:47.02 as one of his big rivals, US champion Donavan Brazier, finished a disappointing fourth and was then disqualified for a lane infringement.

British sprinters Eilidh Doyle and Zoey Clark both qualified for the women’s 400m final on Saturday, albeit helped by a couple of DQs.

Americans Shakima Wimbley and Courtney Okolo led the semi-final performances with 51.34 and 51.79 respectively, as Doyle was third in Wimbley’s heat in 52.15 and Clark ran 52.63 to finish third in a semi-final won by Justyna Swiety-Ersetic of Poland.

But the Britons both moved up to second place in their races following the disqualifications of Lea Sprunger of Switzerland and Stephenie Ann McPherson of Jamaica.

Britain’s Lee Thompson, making his senior team debut, placed sixth in his semi-final in 46.32 and said: “It was a great experience and the crowd were amazing. I’m just going to take the positives and move on.

“I’ve learned to compose myself around these amazing guys and superstars around here. Feeding off the home crowd was a great experience especially in the heats as well. It’s my first time ever doing that and I got goosebumps doing it.”