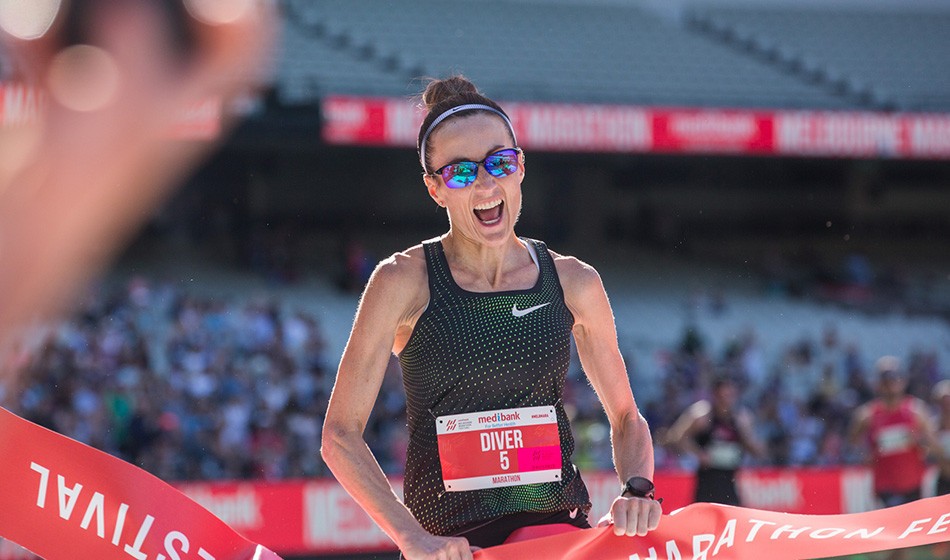 A look at some of the top athletics performances from the past week at events including the Youth Olympic Games, Durban 10km and Manchester Half Marathon

A separate report on the Simplyhealth Great Birmingham Run can be found here, while coverage of the Cardiff Cross Challenge is here. Other highlights included the following…

Irish-born Sinead Diver, a 41-year-old mum of two who only started running eight years ago, won the women’s title in a 2:25:19 course record, while Liam Adams clocked 2:15:13 to win the men’s race.

Australian international Diver’s time puts her fourth on the Australian all-time list and also makes her the second-fastest ever Irish-born female marathoner. She was later congratulated on her performance by Sonia O’Sullivan.

“What a day!” Diver wrote on Instagram. “I’m so chuffed to get the win at Melbourne Marathon yesterday in a course record time of 2:25:17.

“This one is very special and means the world to mean. To cross the finish line and have everyone there who’s helped me in this buildup was magical.”

The first athletics medals of the Youth Olympic Games were awarded on day four of track and field competition.

Just a single centimetre separated the three medallists in the women’s long jump, with Belgium’s Maite Beernaert getting gold after her windy leap of 6.31m (2.4m/s) ahead of Klaudia Endresz of Hungary and Austria’s Ingeborg Gruenwald.

China’s Chen Long and Australia’s Oscar Miers both cleared a Youth Olympic record of 2.22m in the high jump, while Australia’s Keely Small dominated the 800m, her second-stage time being 2:04.76.

Grace Stark became the day’s first gold medallist as she won the women’s 100m hurdles after her second-stage time of 12.83 (2.8m/s). In the second stage of the men’s 400m, Mexico’s Luis Antonia Aviles Ferreiro clocked 46.78 to get the gold ahead of Zambia’s Kennedy Luchembe who won the second-stage race in 46.36 but his combined time with the first-stage placed him second overall.

Barbora Malikova of the Czech Republic got gold in the women’s 400m, winning the second stage in 54.68 to add to her first stage victory of 54.18.

It's a hat trick for Barbora Milkova after winning the #400m at the #YouthOlympicGames. She is the defending World Youth champion and the recent European Youth Champion! #BuenosAires2018. @olympijskytym pic.twitter.com/JKiH5r3Obl

Connor Bell of New Zealand secured the men’s discus title, adding a 66.24m best throw in stage two for a combined total of 133.08m, while in the women’s discus, Melany Morejon of Cuba beat Russia’s Violetta Ignatyeva of Russia – 54.95m to 54.32m in stage two.

The stage-one events had taken place during the first three days of athletics competition as, like at the previous two editions of the Games, there are two stages to each of the 36 medal disciplines. This year the performances from both stages are added together to determine the overall final placing.

Cuba’s world under-20 and under-18 triple jump champion Jordan Diaz provided the highlight as the 17-year-old leapt 17.14m for a Youth Olympics record and a mark just 27cm off his own world under-18 record.

In the women’s event the Youth Olympic record was also broken as world under-20 champion Aleksandra Nacheva of Bulgaria and Spain’s European youth champion Maria Vicente both recorded 13.76m.

World 10,000m silver medallist and double Commonwealth champion Joshua Cheptegei broke the Ugandan record when winning in 27:16 for the second fastest time in the world this year.

Another record was broken by the athlete finishing in second as Switzerland’s Julien Wanders improved the European mark with 27:32.

It was a Ugandan double as Stella Chesang also broke the course record and national record with 31:14 to win the women’s race ahead of her compatriot Mercyline Chelangat with 31:33.

The first female was Eden Rainbow-Cooper, with the 17-year-old clocking 60:03.

The Running Festival At Goodwood, October 14

Simon Gilbert of Devizes RC won the 10km in challenging conditions in 35:15 from Paul Mitchinson with 36:24 and Keith Scofield with 37:30.

Naouele McHugh of Portsmouth Joggers claimed the women’s win in 44:16 from Hannah Jordan with 45:45 and Emma Wickens with 46:41.

Stuart Nicholas won in 2:53:25, while the first woman was Charlie Ramsdale in 3:35:52 on the soggy but scenic multi-terrain course.

» Further coverage and results in the October 18 edition of AW