Impressive wins by Netsanet Gudeta and Geoffrey Kamworor in Valencia 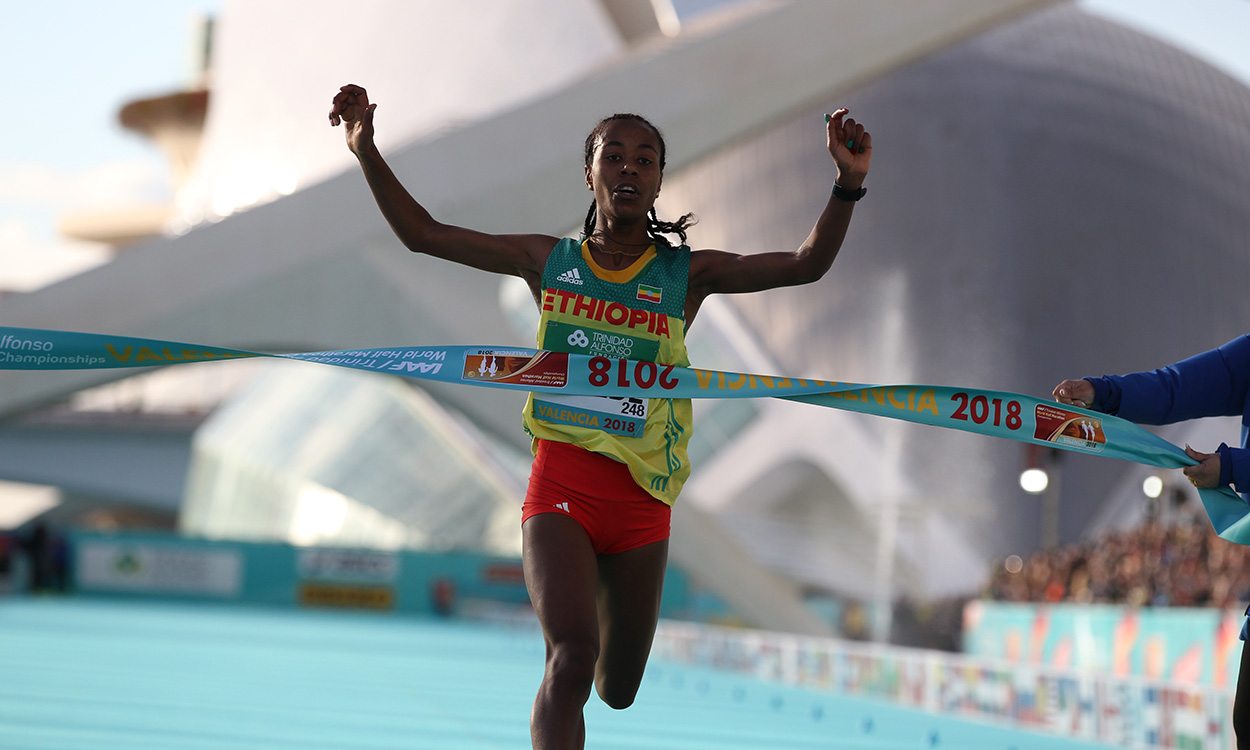 Netsanet Gudeta overcame challenging conditions and a field featuring the world record-holder in superb style to win gold at the IAAF/Trinidad Alfonso World Half Marathon Championships in Valencia on Saturday, while Geoffrey Kamworor also impressed in the Spanish city to win his third consecutive title.

Gudeta’s winning time of 66:11 broke the women-only world record of 66:25 which had been set by Lornah Kiplagat in Udine in 2007 and saw the Ethiopian secure a 43-second victory ahead of Kenya’s Joyciline Jepkosgei and Pauline Kaveke Kamulu.

Jepkosgei had been the pre-race favourite thanks to her outright world record of 64:51 run in Valencia last October but this time she struggled with the windy weather and was pleased with her silver, securing the runner-up spot in 66:54 as she finished two seconds ahead of her Kenyan team-mate.

Bahrain’s Eunice Chebichii Chumba finished fourth in 67:17, while Lonah Chemtai was the top European finisher as she ran a 68:58 Israeli record for 12th.

Charlotte Purdue led the British team home as she was 21st after clocking 71:21, with her team-mates Charlotte Arter (71:52) and Tracy Barlow (72:35 PB) placing 31st and 43rd respectively as GB finished seventh overall and second European team in a competition won by Ethiopia from Kenya and Bahrain.

The early stages of the race had seen Jepkosgei straight to the fore and she led a 12-strong front pack through 5km in 15:39. A surge before 10km saw the lead group reduced to five, with Jepkosgei and Gudeta joined by Kamulu, Chumba and Ethiopia’s Meseret Belete as the 10km mark was passed in 31:38.

Seemingly untroubled by the wind, Gudeta then really started to push things on and led through 15km in 47:30, four seconds ahead of Kamulu and with another four-second gap to Jepkosgei.

After a 15:23 5km split time between 15km and 20km, Gudeta had built up a 40-second lead and she increased that to 43 seconds at the finish to claim victory in world record-breaking fashion, improving on her sixth and fourth-place finishes as top Ethiopian in 2014 and 2016 respectively.

A total of 13 athletes finished inside 70 minutes, with 32 dipping inside 72 minutes.

“The race went according to plan, I was only thinking about the gold medal,” the winner, speaking through an interpreter, told the IAAF.

Jepkosgei, who explained to the IAAF how her training after her world record in October had been affected by her getting malaria, added: “The wind was too strong for me today. I am very happy with my second place.”

Purdue, voted captain of the GB team for the event, said: “I was hoping for a personal best but it was very windy out there so I just wanted a solid run.

“Two years ago (in Cardiff), I was 33rd, so to be 21st is an improvement. I loved being the captain. I was thinking ‘I’ve got to do well because I am captain and I have got to remember this race’. It made me push that little bit harder.” 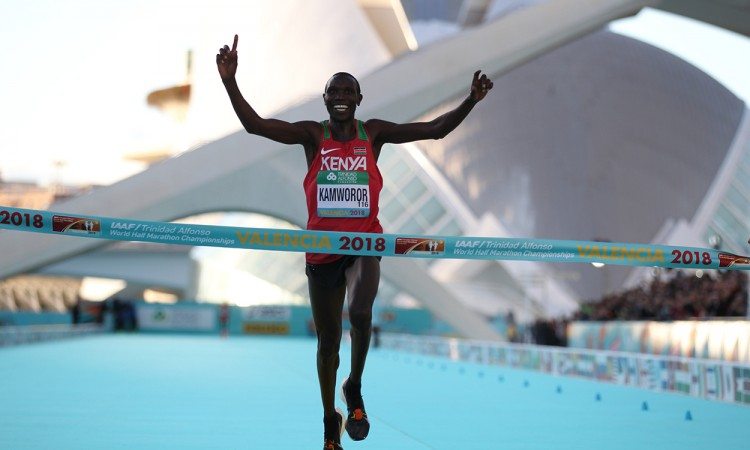 Ahead of the men’s race, Kamworor had been in a confident mood as he looked to add another gold to his haul after wins in Copenhagen four years ago and Cardiff in 2016.

The Kenyan proved his attitude had not just been for show as he stormed the second half of the race to cross the finish line in 60:02 and win by 20 seconds ahead of Bahrain’s Abraham Naibei Cheroben, with Aron Kifle of Eritrea third in 60:31.

Ethiopia’s Jemal Yimer was fourth in 60:33, while Switzerland’s Julien Wanders was the first European as he clocked 61:03 for eighth.

A large lead group had gone through 5km in 14:31, before Turkey’s Kaan Kigen Özbilen and Kamworor moved to the front and led through 10km in 29:28.

The leading group was still 30-strong at 15km but not long after that Kamworor made his intentions known and started to move away.

An incredible 5km split time of 13:01 between 15km and 20km, albeit with a tailwind, understandably did damage and left Kamworor free to stride over the line unchallenged to complete his hat-trick of victories.

“It’s really amazing. I’m really happy to defend the title and to win in Valencia, for the third time,” Kamworor told the IAAF. “I’m running out of words, I really am.”

Yimer led Ethiopia to team victory ahead of Kenya and Bahrain, while the GB team placed 11th.

“The experience has been great and I hope to get qualification for the European Championships in the 10,000m in the summer,” said Aadan, who improved on the PB he had run in Granollers in February. “It was tough and painful but well worth it,” he added on his performance in Valencia. “I have some things to learn from in terms of pace and who you are racing with.”