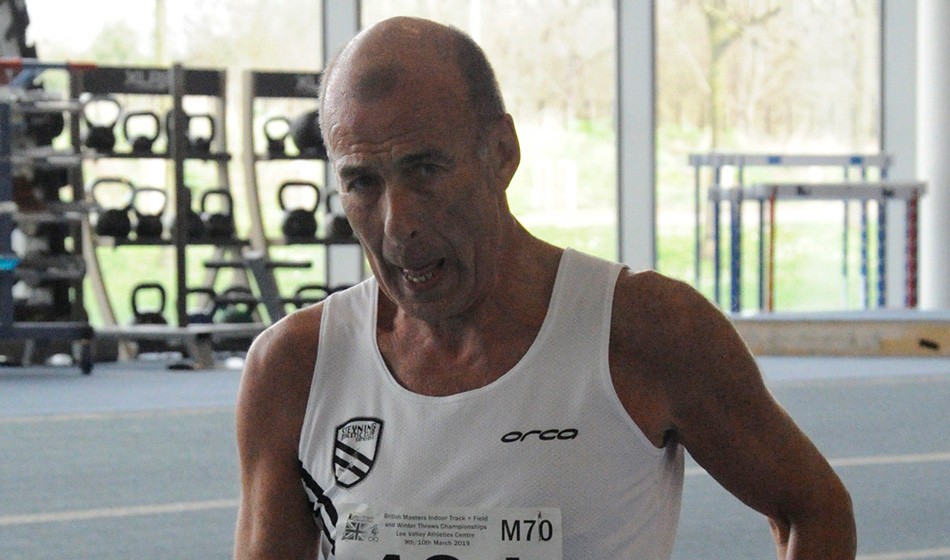 British Olympian Ian Richards, who was disqualified in the recent British Championships 3000m walk, made no mistake on day two of the World Masters Indoor Championships in Poland on what was otherwise a disappointing day for British walkers.

He took almost 20 seconds off the M70 world record as his 15:19.64 gave him a 50-second victory over Italy’s Ettorino Formentin.

Britain’s distance runners followed up their success on day one in the 3000m with more success in the cross-country event which was held adjacent to the stadium on a gruelling four-lap course over a 2km circuit through the woods, featuring the sharpest turn ever seen on a cross-country course just 40 metres from the finish line.

The multiple sharp ups and downs and twists and turns and sand traps sapped the energy of most of the participants, though near freezing temperatures and sleet and rain might well have suited the Brits more than the Spanish and southern European contestants.

First to strike gold for Britain was Angela Copson in the W70 6km event over three laps which was held with the M75-plus race.

Five M75 athletes beat Copson but the W70 runners were left over three minutes in arrears as she won in 30:43 to Poland’s runner-up Zofia Siennicki’s 34:16.

She also won a team silver as Germany took the honours.

In the same race, Richard Pitcairn-Knowles won M85 gold by over seven minutes in 50:41 while W80 Pam Jones took silver in the same time.

The M75 team though struck gold and were led in by Phil Brennan’s eighth in 31:29.

The first Briton to strike individual gold in the 8km race was Ben Reynolds.

Disappointed with his fourth place in the 3000m, he ran his usual smart tactical race on the country and bided his time as a succession of runners went ahead. He made his move on the sandy hill in the last 800 metres and held the advantage on the fast downhill section and hairpin bend to win by eight seconds in 28:42 from Poland’s Marek Dziegielewski.

Britain seemed assured of team golds with two others in the top dozen but unfortunately Rob McHarg had not worn a number on his back as well as his front and was disqualified and in his absence, Britain finished third just 14 seconds from Ireland’s gold.

Poland’s silver medal team was completed by Jan Huruk, who managed a second and a third in London in the nineties, and the 2:10:07 marathoner also finished fourth in the 1991 World Championships.

However they did better once the women’s events began over the longer distance.

The first race – the combined W60 and W65 race – was frustrating as an injured Anna Garnier faded to fifth in 39:00 over the closing stages after being third at half way and former Olympian Penny Yule just missed a medal by five seconds finishing fourth in 40:20 but both teams finished second to Germany with the W65s also assisted by 3000m champion Ros Tabor in sixth.

The most successful race for Britain though was the combined W50 and W55 race. W55 3000m champion Clare Elms was initially targeting just an age group category title but feeling easy and going faster each lap, she won the overall race by 24 seconds fin 32:51 from Irish W50 Annette Kealy.

Kealy initially thought she had only won silver to match her 3000m position but was delighted to be told by Elms that she had actually won her age group gold but it was close though as Britain’s Sue McDonald, who had been fourth in the 3000m, never gave up and finished just two seconds back in 33:17.

Britain were even more dominant in the W55s with Elms winning gold by 54 seconds from her 3000m runner-up Esther Pedrosa Carrete of Spain, with Caroline Wood taking bronze in 35:22 and Lucy Woolhouse fourth in 35:28.

Christine Anthony in sixth and Jane Pidgeon in seventh did not even score as Britain packed five in seven and they would have won very easily even without the individual champion scoring.

In the field, Britain’s Gareth Cook won the hammer with a 54.46m throw to win by two metres in a dominant victory.

Melanie Garland finished a fine second in the W55 long jump with 4.73m though was well behind USA’s Neringa Jakstiene who set a world record 5.22m.

Adam Young won a M50 bronze in the M50 high jump with a 1.80m leap as the top four all covered that height.

Showing the great age athletes live to compete to, M95 Pekka Penttila won the long jump with a 1.80m leap while W100 Man Kaur won the shot with a 2.13m throw.