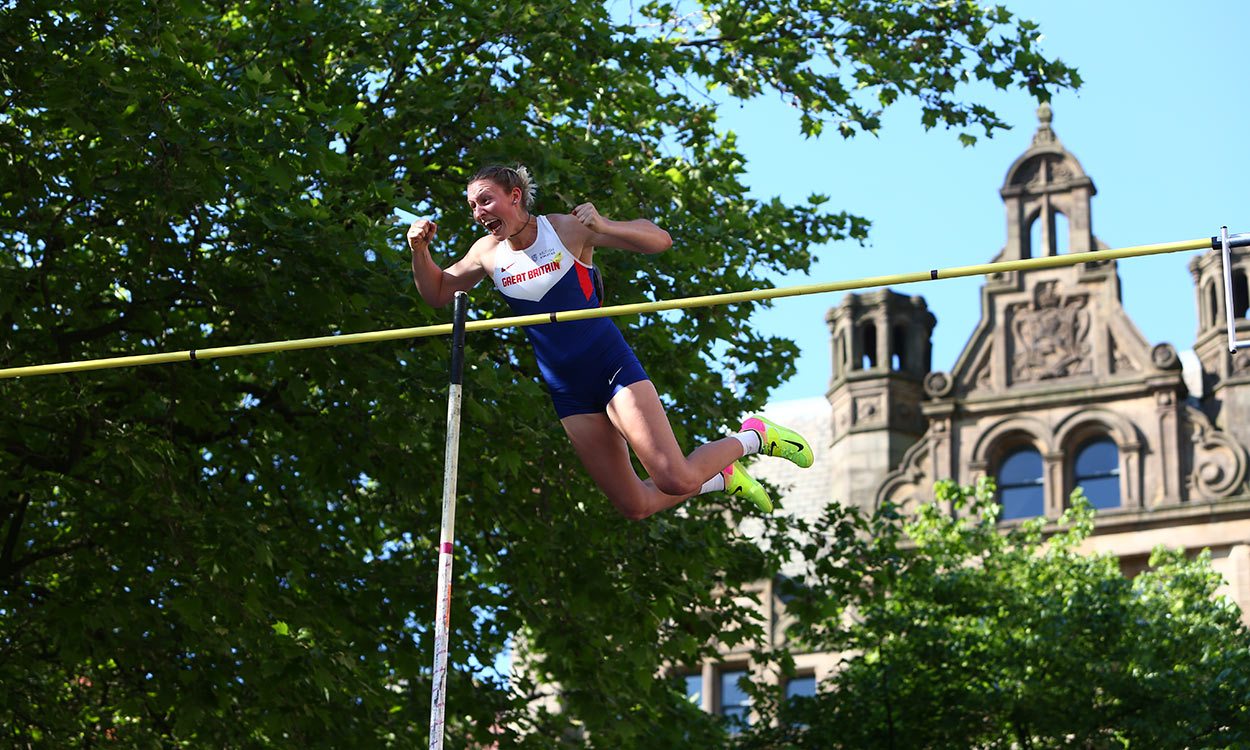 Holly Bradshaw’s British outdoor pole vault record and Greg Rutherford’s long jump win were among the highlights of the Arcadis Great CityGames Manchester on Friday evening as athletes and fans came together on the streets of the city.

Proving her return to top form, Bradshaw improved her own national outdoor record by nine centimetres, soaring over 4.80m on her first attempt for a dominant victory after also clearing 4.72m first time.

“Training has been going really well,” said the 25-year-old, who has cleared a best of 4.87m indoors. “I’m in really good shape at the minute. I knew the height was there. It was a bit of a struggle but it’s been such a good day.”

Around 20,000 spectators took to Albert Square and Deansgate on a warm and sunny evening to watch the track and field action, with a minute’s silence held during the event following Monday’s horrific attack in the city.

Bradshaw, who began her pole vaulting career in Manchester and trained in the city for five years, said she was proud of her performance and the support the athletes received.

“I was really upset by what happened, so to get out there and perform like that, I’m so proud and so happy that everyone came out to support,” she said.

“A lot of people have been saying on social media and to the news that they want to try and carry on as normal and have some solidarity and everyone get behind it. That’s really what happened today.”

She later tweeted: “WHAT A DAY! 4.80m… 2 British Records…. highest I’ve jumped since 2012 and performance of the day! Manchester that was for you.”

Another of the stand-out performances also came at Albert Square as Olympic, world, European and Commonwealth long jump gold medallist Rutherford cleared 8.08m on his second attempt and then improved to 8.18m in the final round to secure success ahead of Uruguay’s Emiliano Lasa with 7.96m.

More from an interview with Rutherford, in which he reflects on his performance and the crowds, can be read here.

Over on a specially-constructed 250m track down nearby Deansgate, Sally Pearson, James Dasaolu and Sophie Kamlish were among the athletes to impress.

After finishing runner-up to British 60m record-holder Asha Philip in the 100m, London 2012 Olympic 100m hurdles champion Pearson returned to the track to clock 12.81 in her specialist event ahead of Isabelle Pedersen’s 12.94.

“It was good to get second and then win the hurdles but the hurdles was so rusty,” said Pearson, who has already secured her spot on the Australian team for the IAAF World Championships in London this summer. “I know I haven’t raced since April 2 so I shouldn’t be too disappointed but we’re athletes and we always want more. A win’s a win and you take it, but times for me mean more than anything.”

Pearson, who has been in the city since last weekend, added: “The atmosphere was fantastic. I wasn’t expecting anything less, to be honest. I think the English are a bit like the Australians and we’re pretty resilient – we want to get out there and show the world that we’re here, we’re strong and we’re standing together. It was nice to feel that out there, with everyone being very supportive.”

Paralympic champion Jonnie Peacock had been looking forward to renewing his rivalry with USA’s three-time world gold medallist Richard Browne in the T44 100m but, with Browne a late withdrawal from the race, the Briton went on to secure a dominant victory, clocking 10.91.

The women’s race was much closer, with T44 world record-holder Kamlish beating Dutch sprinter Marlou van Rhijn, who holds the T43 world record, for the first time – 13.24 to 13.26.

Lykourgos-Stefanos Tsakonas of Greece won the 150m in 15.04 from Britain’s Harry Aikines-Aryeetey and Richard Kilty with 15.22 and 15.43 respectively, while USA’s Johnny Dutch secured 200m hurdles success in 22.48 and Spain’s Orlando Ortega claimed 110m hurdles victory with his time of 13.50.