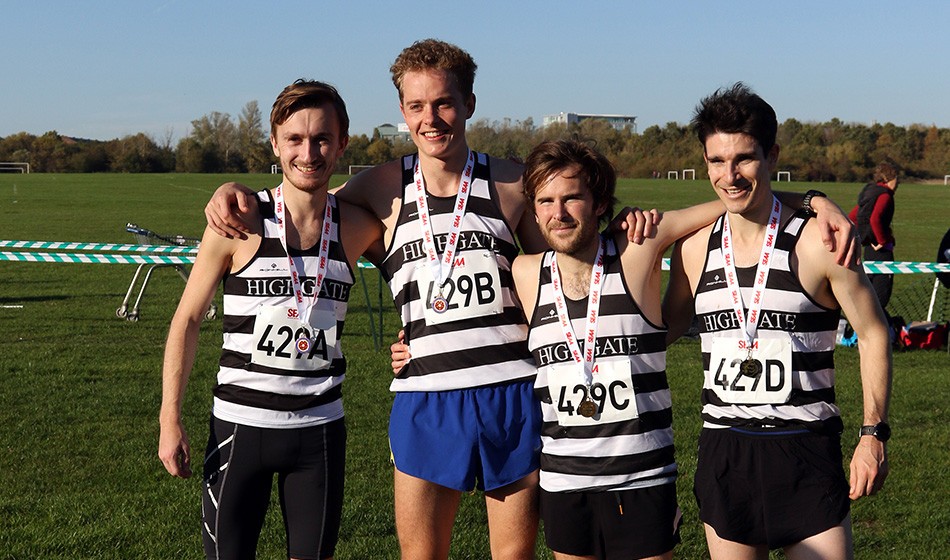 Highlights from the South, North and Midlands Cross Country Relay Championships, plus the Amsterdam Marathon, Toronto Waterfront Marathon and more

A report on Sunday’s Simplyhealth Great South Run can be found here, while highlights from other events are below.

Just two seconds covered the leading trio in the men’s race. A well-judged leg from Highgate’s Sean Renfer gave him a one-second win over Belgrave, who had led into the final leg after a strong run from Nick Goolab.

Closing on both in third was Thames Valley’s Mohamud Aadan, who followed up his fine run in the Commonwealth Half Marathon Championships with the fastest leg of 13:26 which took over a minute off Highgate and Belgrave.

Until the final leg, Highgate’s Roger Poolman had been fastest with his 13:55 which took the eventual winners from fifth to a 30-second lead at half way.

Pippa Woolven took Wycombe Phoenix from third to first on the last leg with a 11:01 clocking. Effectively that stood as the fastest leg for 23 seconds as Commonwealth 1500m finalist Katie Snowden ran 10:59 in moving Herne Hill from fifth to second.

The first race was the combined under-20 and under-17 women’s event and that saw Blackheath’s U17 team gain a seven-second win but runners-up Herne Hill provided the fastest time from Yasmin Marghini who ran 7:57 on the opening leg.

Back in sixth overall, Bracknell won the under-20 race.

The combined men’s race in those age-groups saw Shaftesbury’s under-20 team win but disappointingly only three teams finished that age group. Tom Patrick was fastest with a 10:00 leg.

Shaftesbury’s under-17 team also took gold with their Kristian Imroth even faster than the under-20s with a 9:56. Guildford and Godalming had a clear win in the under-13 girls’ race and their last leg runner Surrey League winner Katie Sakaria was fastest with a 7:20 for the 2000m leg.

Bracknell also won the under-13 boys’ race by 12 seconds from Herne Hill with the fastest leg from Poole’s multi-champion William Rabjohns who ran 6:35.

Bracknell’s third gold came in the under-15 boys’ race as they narrowly sprinted to victory thanks to a 6:28 from fastest leg runner Edward Ensor.

Blackheath and Bromley retained their under-15 title even though last year’s squad successfully moved up to the under-17s.

800m track sensation Zakia Mossi set off in third and with a well-judged 7:01, she ran the fastest time and gave her club a nine-second victory.

Further coverage and Mark Easton’s photographs will appear in this week’s AW magazine.

Daniel Bebbington’s 9:51 gave them the lead on the opening leg and though they lost the lead on leg two, Tiarnan Crorken on leg three and then Patrick Dever’s day’s fastest effort of 9:44 gave them victory by 24 seconds from Derby who were anchored by Richard Weir.

Natasha Hatswell’s 11:37 gave them a 15-second lead which Nicola Devine’s 11:53 stretched to almost a minute. Lori Handbury’s 12:14 saw them home but defending champions Lincoln closed the gap to 24 seconds thanks to Abbie Donnelly’s 11:50.

The fastest lap went to Birtley’s Lydia Turner, the 2014 National junior cross-country winner. Her 11:36 came on the final leg as she moved from 14th to eighth.

Sale won the opening race – the under-17 women’s three-stager over the 2.3km lap – with Lara Crawford moving Sale up from third on the final lap with the fastest time of 8:03.

Trafford took the under-17 men’s race after their Cynog Williams moved them from fourth to victory on the final stage with the fastest lap of 6:45.

Hallamshire won the under-15 girls’ race by 46 seconds from Chorley, with their three runners running within six seconds of each other. Holly Weedall was fastest with a 7:18 in bringing Vale Royal from ninth to third.

Vale Royal did take the under-15 boys’ race by 10 seconds from Wirral, though Birtley’s first-leg winner Chris Perkins was fastest with a 6:45.

The under-13 boys’ winners, Barnsley, had Johnson Hughes move them from fourth to victory on the final 1.8km leg as Sale’s Jackson Spark and Sheffield’s Zak Ferguson shared the fastest leg of 5:24.

Stockport won the under-13 girls’ race by 12 seconds, though Holmfirth’s Imogen Wolff was fastest with a 5:47.

Wirral’s boys and Keighley and Craven’s girls won the under-11 races.

More from a report by Martin Duff and Harry Shakeshaft’s photographs will appear in this week’s magazine. 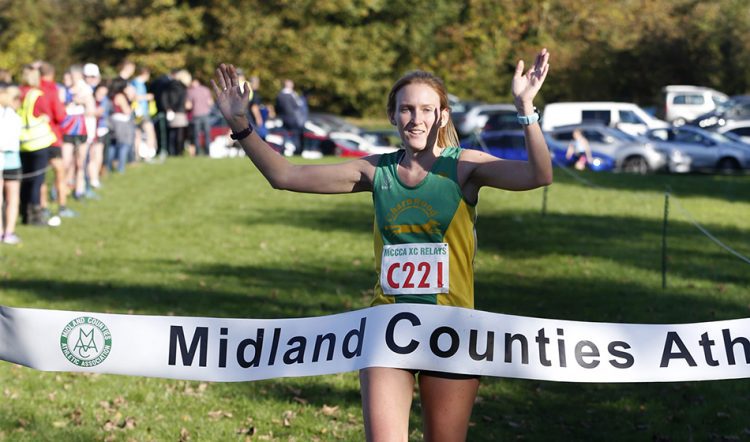 Luke Moses for Telford AC and Misha Twardochleb for Newcastle anchored their teams to under-17 victories, while under-15 wins were claimed by Charnwood AC, with Colin Foord on anchor, and Wolverhampton & Bilston, with Louise Hackett on the last leg.

There was another win for Telford AC in the under-13 boys’ event as Charlie Preece anchored them to victory, while Wolverhampton & Bilston also claimed the under-13 girls’ title, anchored by Isabelle Price.

Only limited results were available at the time of publication.

A more in-depth report and David Griffiths’ photographs will appear in the next edition of AW magazine.

More from a Malcolm McCausland report in the next AW magazine.

In the women’s race, Aldershot, Farnham & District’s Lauren Hall won in 17:24 from Sonja Vernikov with 17:59 and City of Portsmouth’s Rhiannon Dunlop with a PB of 18:06.

Hall’s win came on the day that a new memorial bench and plaque dedicated to her club-mates Stacey Burrows and Lucy Pygott, who died after being hit by a car while training in 2016, was being presented.

“Today is a really memorial day in terms of the club,” Hall told AW. “I really wanted to come out and do the club proud.”

Kenenisa Bekele had looked relaxed as he passed halfway in 62:14 but he was dropped from the lead group of five just after 32km. Inside the final mile, he slowed down to a walk and then stepped off the course and dropped out.

Ethiopia’s Tsehay Gemechu upset the favourites as she made her half-marathon debut, clocking 66:50 to win and break the course record. She out-sprinted Kenya’s world record-holder Joyciline Jepkosgei, who finished second in 66:56. Ethiopia’s Zeineba Yimer was third in 66:59.

Tirunesh Dibaba seemed to struggle from the 5km point and finished sixth in 68:36.

In the men’s race, Ethiopia’s Andamlak Belihu won in 59:18, four seconds ahead of his compatriot Amdework Walelegn, while Daniel Kipchumba of Kenya was third in 59:48.

It was a Birchfield Harriers double as Tom Dodd claimed victory in 14:43, while Julia Cooke won the women’s race in 16:36.

» Further coverage and results in the October 25 edition of AW