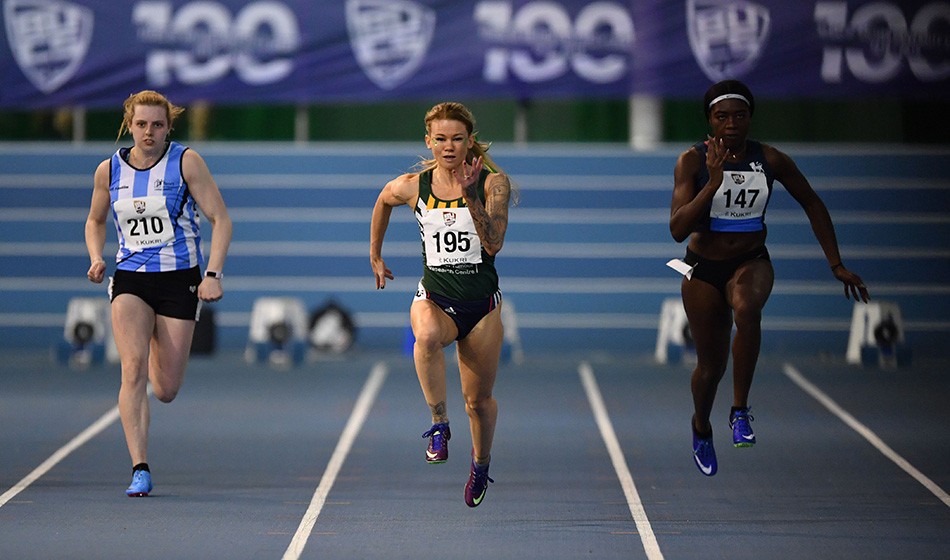 The University of Nottingham Sport Scholar clocked 7.32 ahead of Loughborough’s Alisha Rees with 7.38 and East London’s Gina Akpe-Moses who ran 7.45, with Mills just missing her personal best of 7.31 from Vienna in 2013 and the championship record which matches that mark.

In the women’s 60m Hayley Mills of Nottingham is just shy of a championship record and PB in a time of 7.32 #BUCSNationals pic.twitter.com/A6ye0Y5jmU

Speaking to Athletics Weekly about her return to form, Mills said: “You feel like you’re never going to get that feeling again, that you’ll never make it back to your absolute best.

“Moments like this are why we train and do this every day.

“The quality here was so high this year. Gina and Alisha were amazing. I wasn’t sure whether or not I was going to come out on top there. To beat that kind of a field makes it even better.”

Mills will also be competing in her preferred event, the 200m, on Sunday.

Kristian Jones of Loughborough wins the 60m in 6.76 at #BUCSNationals pic.twitter.com/BEQoyfJjOs

A photo finish was required to separate Efoloko and Bromby as there was just two thousandths of a second between them, with both men finishing in 6.80.

In a close race, Loughborough’s Shamindra Perera ran the same time as Porter but secured the runner-up spot.

Jessica Hunter of Bedfordshire won the women’s 60m hurdles with a lifetime best of 8.23 ahead of Sheffield Hallam’s Alicia Barrett with 8.32 and Kingston’s Anastasia Davies in 8.42.

The men’s 60m ambulatory title was won by Christopher Styles of Worcester, while Julie Rogers of Cardiff Met claimed gold in the women’s race.

The Indoor Athletics Championships, which continue until Sunday, are part of the wider BUCS Sport National Championships which celebrates 100 years of university sport in 2019.

A live stream for the athletics action can be found here and on our Facebook page.