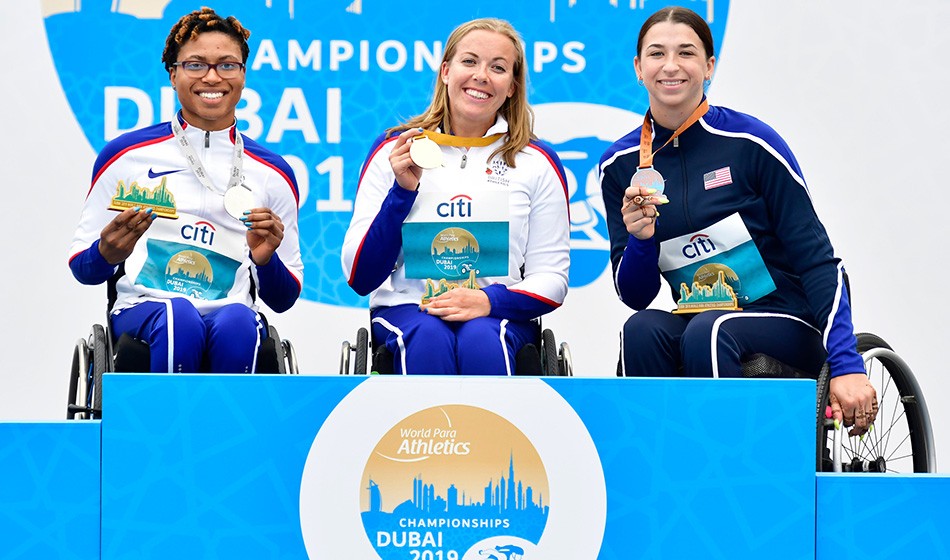 Hannah Cockroft secured her 11th world title in style on Sunday morning as she stormed to a world record time of 16.77 ahead of her British team-mate Kare Adenegan.

Adenegan had broken Cockroft’s global record mark with 16.80 in London last year but the five-time Paralympic champion regained the record in Dubai with the 100m performance of her life.

“I think number 11 is probably the best yet. It was definitely the hardest to win,” said Cockroft. “They mean more and more.

“Kare is the biggest rival I’ve ever had; she’s a fantastic athlete. It’s great that I’ve come out on top here, but you know that can switch around at any time. You’ve got to take the gold when you can and keep working hard.

“I really wanted to come and win the gold. I would have been happy with silver because I know Kare has been working hard and is strong and was the world record holder. I haven’t dipped below 17 seconds ever in my career, not even in training, so I have no idea where that came from, but I’m so pleased it did on race day.

“I just about managed to hold back the tears when I crossed the finish line, so it is going to be an emotional moment on the podium.”

This morning in Dubai, @HCDream2012 stormed to win her 11th world @ParaAthletics title, regaining the T34 100m world record with a time of 16.77 ahead of her team-mate and previous record-holder @AdeneganK, who secured silver. Afterwards Cockroft spoke with @stuartweir. pic.twitter.com/WsAAJazkJk

Teenager Adenegan, who has been balancing her athletics with starting university and talked about Plato and being able to flourish in her post race interview with AW (video below), said: “The silver means a lot.

“I’ve had a really long year so I wasn’t sure what kind of form I would come into the world championships with, but the fact I’ve done a season’s best shows I’m improving and getting back to the shape I need to be in.”

.@AdeneganK secured T34 100m silver behind @HCDream2012, who broke her WR, at the World @ParaAthletics Champs in Dubai this morning & reflected on her race with @stuartweir. Having been balancing athletics with starting uni, she even talked about Plato & being able to flourish. pic.twitter.com/OZ0decrnBT

Another medal for GB was claimed in the men’s F41 shot put as world record-holder Kyron Duke bagged bronze, throwing 13.82m in a competition won by Uzbekistan’s Bobirjon Omonov with a 14.03m championship record.

Reigning world champion Niko Kappel of Germany was second after a throw of 13.87m.

The first world record of the day came in the men’s F12 shot put, with Ukraine’s Roman Danyliuk throwing 16.69m. Spain’s Kim Lopez Gonzalez got silver with 15.69m and Elbek Sultonov from Uzbekistan bronze with 15.39m.

Poland’s Barbara Niewiedzial won her sixth world title with victory in the T20 1500m in 4:36.10 as GB’s Hannah Taunton finished fifth in 4:45.01 on her international debut.

Another multiple world champion is USA’s Lex Gillette and he won his fourth consecutive men’s T11 long jump title with a leap of 6.45m, breaking the 17-year-old championship record.

“Tokyo is always in mind, but now I will go home, take a few days off and enjoy this,” he said.