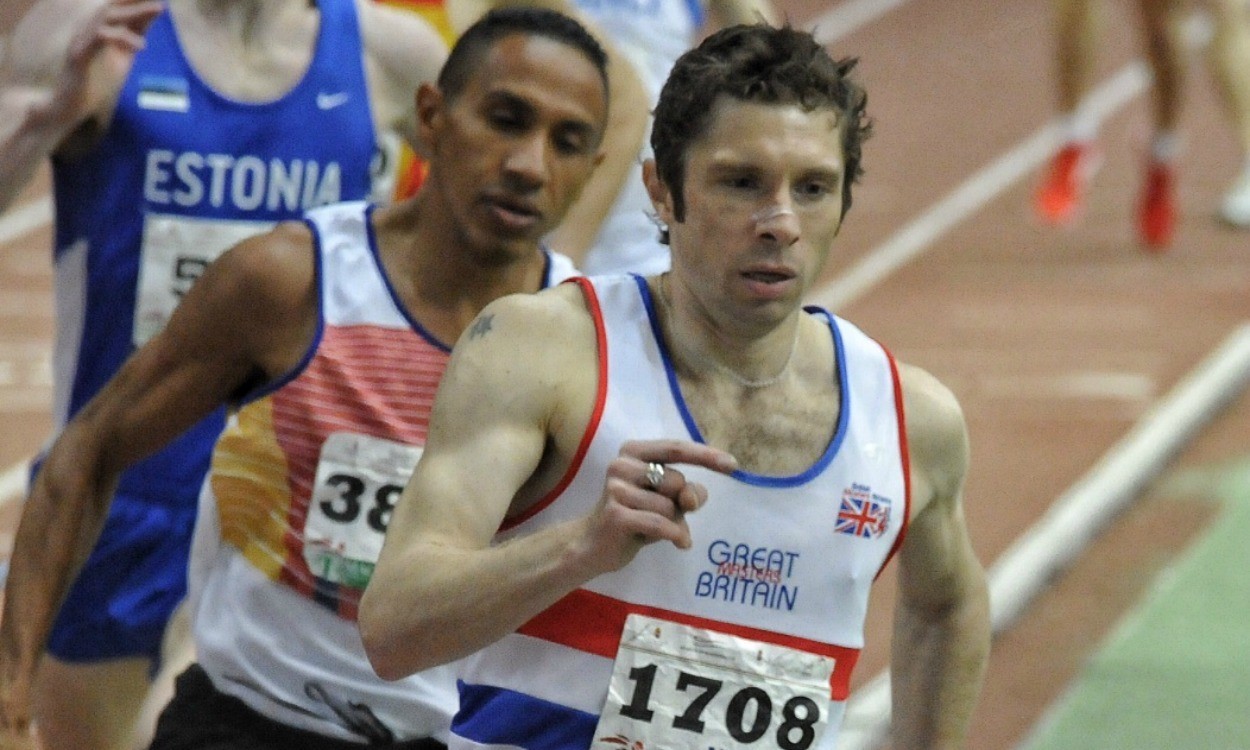 Britain had a superb day at the World Masters Championships on Friday, taking six golds in the 800m and there was also success in the sprints, jumps and throws.

Following their gold medals in the 3000m less than 24 hours earlier, there was further gold in the four lap event for Clare Elms, Anthony Whiteman, James Thie (pictured above) and Angela Copson as well as first golds for Laura Mahady and John Newcombe.

Just as in the 3000m, Elms won W50 gold and was quicker than all the W40s and W45s in their events too. She sat back early on as USA’s Lorraine Jasper led through 400m in 70 seconds, but the pace slowed on the third lap and world indoor record holder Elms kicked clear. Briefly, Poland’s former W45 champion Zofia Wieciorkowska closed down the backstraight but Elms kicked again in the last 100m to win in 2:21.27, which was announced as a world record but she has a yet to be ratified 2:21.09 in the bag from last month in England.

Copson had an even easier ride in the W65 event as she won her fourth gold of the Championships. She led through 200m in a fast 42 and built up a good lead but eased the pace through 400m in 88 seconds and 600m in 1:56 and looked under pressure as Sweden’s Ulla Littenheim closed the gap. However, the 66-year-old Briton sprinted the last 100m to win in 2:57.86 and open a four second gap on the Swede.

Whiteman and Thie added to their medal collection and it was a pity that they didn’t meet on the track. Whiteman held back early on as the Brazilian Paulo Paiutto led through 200m inside 27 seconds and it was Whiteman’s team-mate Richard Scott who led at 400m in 55 seconds. Whiteman kicked hard 350m out and quickly opened a gap and passed 600m inside 1:24. He continued to go away and at the finish he timed 1:52.60 which gave him over a three second winning margin to Spain’s Raul Aragon.

Mike Toal, who was fourth in last year’s European Masters and fourth in the 2007 World Masters outdoors but hadn’t run faster than 2:03 this year set a lifetime indoor best with 1:57.19 and Scott rallied late to give Britain three of the first four.

Thie didn’t win by such a margin but did have tougher opposition. He was sixth at 200m as the leaders passed in 27 but had moved up to fourth as 400m was reached in 56. He was second at the bell in 85 seconds to Spain’s Juan Gil and kicked into the lead down the final backstraight to win in 1:53.56. Venezuela’s Wilfredo Borotoche finished fast for second in 1:54.00.

The M75 800m was a exciting tactical race. New to the age group, Newcombe, has only run one or two races a year in the last six years and all 800m. All the field were in contention as they passed 400m in a slow 91 seconds. The pace picked up slightly at 600m in 1:45 but the last 200m was seven seconds faster than any other lap as Newcombe kicked past American Sidney Howard to win in 2:52.60.

The W55 race saw British record holder and European champion Mahady control the race all the way in a steady 39-40 seconds per lap. Spain’s former W50 world record holder Aurora Perez, who had lost 3000m gold in the final strides by easing off prematurely, tracked her through 600m in 2:00 but the Scot blitzed a 33 second last 200m and opened up exactly six seconds on the Spaniard.

Bernadine Pritchett won silver in the W45 800m after leading into the straight and she timed 2:26.77 as she was pipped by the late rush of American Charmaine Roberts who won in 2:26.61.

Helen Reynolds finished strongly in the W35 800m in 2:17.41 as she snatched bronze by just seven hundredths of a second.

In a very close M65 800m Pete Molloy took bronze in 2:24.52 to win his fourth medal of the Championships but W60 Ros Tabor, who had matched Molloy’s medals until now, finished fourth in her fastest time for three years.

Britain’s sprinters did far better in the 200m than they did in the 60m, winning three gold medals.

Ellen Ruddock, a close second at 60m, was in her usual outside lane in the W35 200m and she dominated throughout to time 25.50 to win gold while team-mate Lesley Owusu finished third in 25.94.

Darren Scott, who turned 45 a few weeks ago, had a comfortable M45 half second victory from lane five in the 200m in 23.19 after being confident of victory after the semi finals. Brazil’s Ricardo de Itacaramby was second in 23.69.

Alan Mellett went one place better in the M80 200m than he did in the 60m as he won impressively in 34.16, winning by a second from Herbert Muller of Germany.

Caroline Powell finished second in the W60 200m in 29.44 but was beaten by Canadian Karla del Grande’s superb world record of 28.23.

The other most impressive sprinters of the day though were probably Guido Müller of Germany, who has been winning masters titles for over 35 years and won the M75 200m in 27.99, and M60 Bill Collins. The American, who holds most of the sprint world records, won his event in 24.70 from GB’s Alastair Ross who timed 25.24 to take silver. Collins ran in the USA’s world record 4x100m team in Dusselodorf in 1977 and has broken 20 seconds for 200m.

Averil McClelland won her third silver medal of the Championships as she timed 28.52 to be pipped by winner Wendy Alexis of Canada with 28.46. Carole Filer finished third in 29.53 for her third medal too, but she had earlier won the long jump in 4.71m to McClelland’s 4.58m.

Other Brits to medal at 200m included Dot Fraser who couldn’t quite make it a sprint double as her 40.52 fell a second short of USA’s Jean Daprano.

Britain also scored golds in the field apart from Filer. Sue Yeomans won the W65 pole vault with an excellent leap of 2.70m.

Carole Derrien won the W75 hammer by just four centimetres with a throw of 27.01m.