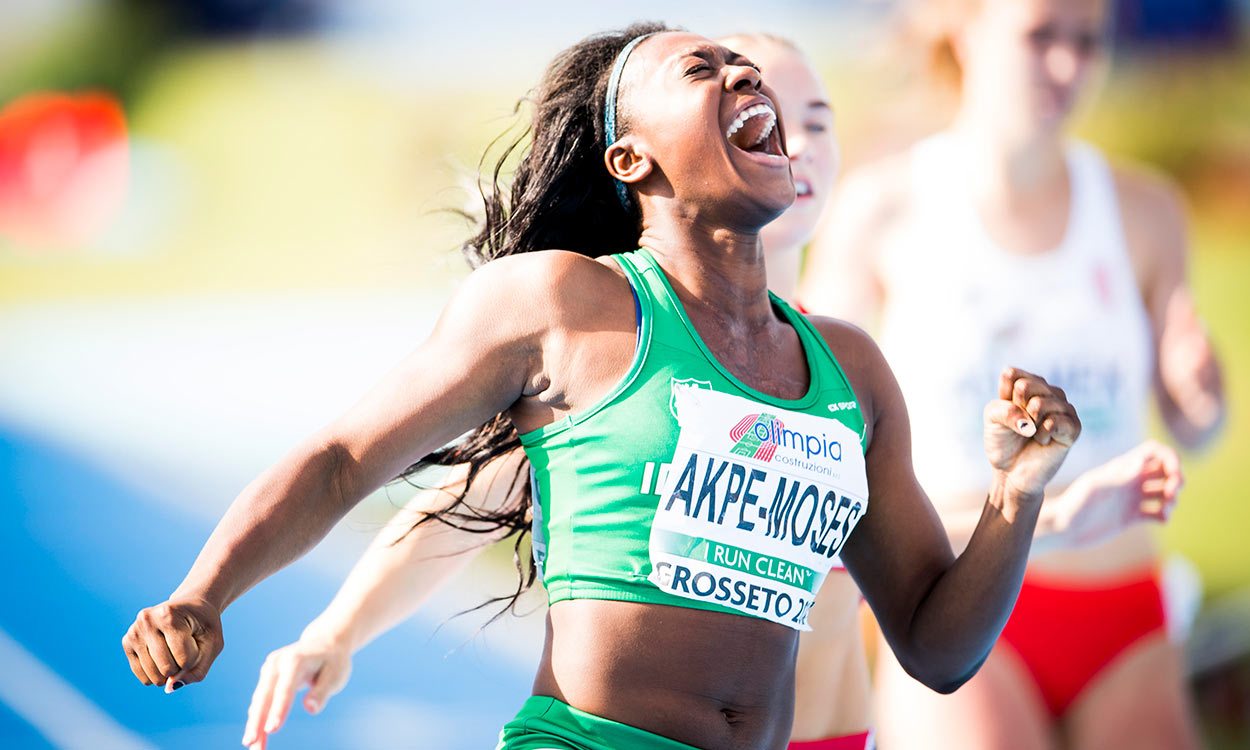 Results from the European U20 Championships in Italy and the Commonwealth Youth Games in Bahamas, where Amber Anning bagged bronze

Gina Akpe-Moses got gold for Ireland on the second day of the European U20 Championships in Grosseto, Italy, while Filippo Tortu joined her in 100m success in front of his home fans on Friday.

“It was amazing and I’m so excited,” said the winner.

“I hoped to get a medal, and eventually the dream came true. In the semi-finals I started thinking I could jump on the podium, but only in the last 20m of the final I had the thought ‘I can get the gold medal’.”

Tortu and his fellow finalists had to battle with a headwind of -4.3 m/s but the Italian claimed victory with 10.73 ahead of Finland’s Samuel Purola with 10.79 and GB’s Oliver Bromby with 10.88.

“The only important thing wasn’t the time but the place and I’m very happy for that,” said Tortu.

Naomi Ogbeta had earlier claimed GB’s first medal of the championships as she leapt a windy 13.68m (+3.0 m/s) in the sixth round of a triple jump competition won by Violetta Skvartsova of Belarus with 14.21m (+2.4 m/s).

Four athletes achieved more than 6000 points in the heptathlon, led by Ukraine’s Alina Shukh and Switzerland’s Geraldine Ruckstuhl with 6381 and 6357 points respectively. Proving the high standard of the competition, GB’s Niamh Emerson missed out on a medal despite achieving 6013 points.

“I wanted 5900 [England Commonwealth Games standard] coming in, and I knew I could get that, everything just had to be good,” said Emerson, who finished fourth and moves up to third on the British junior all-time list behind Katarina Johnson-Thompson and Morgan Lake and ahead of Jessica Ennis-Hill. “After my javelin PB I was like ‘I’m going to get 6000 points and that is just crazy’. Now I just need to keep progressing.”

Holly McArthur also impressed as she improved her PBs in all seven events for 5687 points to place 11th and also achieve a Commonwealth Games standard for Scotland.

Ukraine’s Hlib Piskunov broke the championship record with 81.75m to get hammer gold, with all three of his legal throws over 80 metres. After throwing 76.62m from his one attempt in qualifying, GB’s Jake Norris had a best of 72.68m in the final which placed him seventh.

Norway’s Marcus Thomsen threw an under-20 shot put-leading mark of 21.36m to win, while Nikol Tabackova of Czech Republic threw 55.10m to claim the javelin title. Alexandra Emilianov of Moldova won the discus, while Miltiádis Tentóglou of Greece secured success in the long jump after a leap of 8.07m.

Full results from Grosseto can be found here.

Over at the Commonwealth Youth Games in Nassau, Bahamas, England’s Amber Anning was among the medallists as the 16-year-old clocked an impressive PB of 53.68 to bag bronze in a 400m final won by Australia’s Bendere Oboya in 52.69. Anning’s England team-mate Emma Alderson placed sixth in 54.90.

The boys event was won by Kennedy Luchembe of Zambia in 47.63.

Results from Nassau are here.