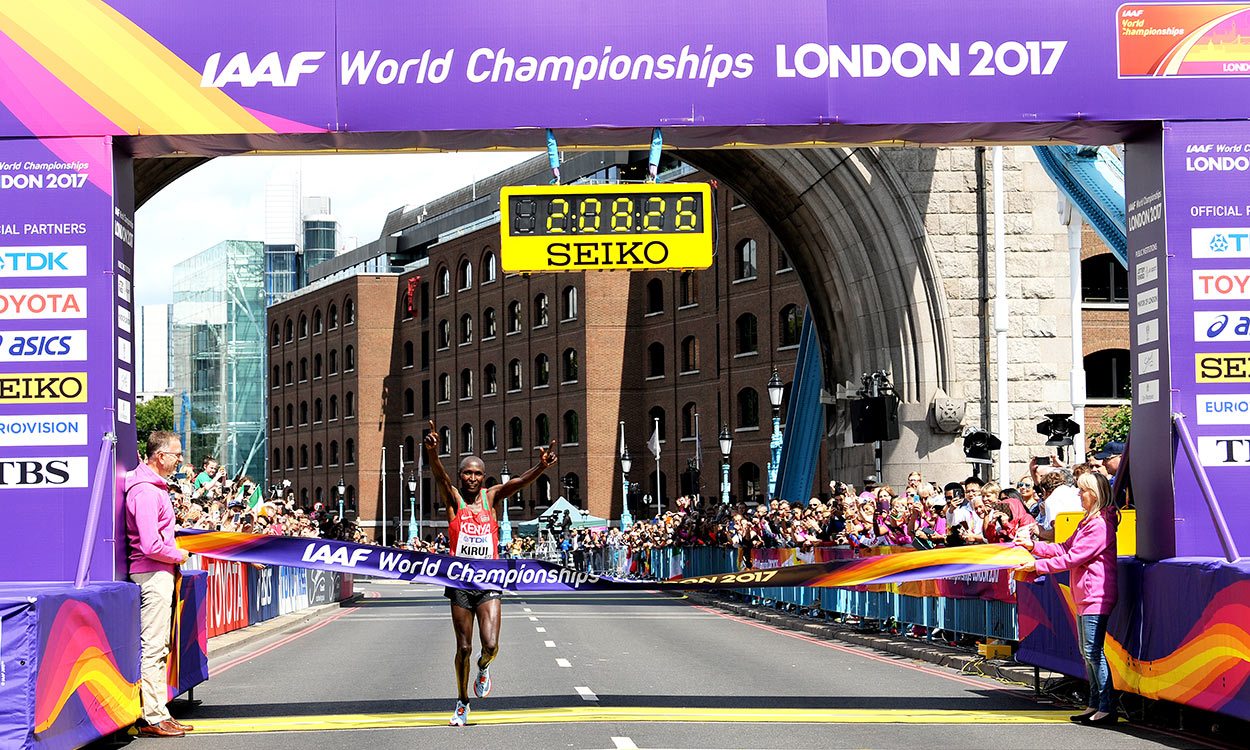 The fantastic setting of London’s streets in front of big crowds with a truly world-class field surely made this the greatest ever World Championships marathon, if not quite the fastest.

The race started and finished on Tower Bridge and was held over a four-lap circuit, with the event organised by The Great Run Company.

The story from a British perspective was the superb performance from Callum Hawkins, who was the first European in fourth. It was one of the best ever major championships efforts by a British male marathoner.

Despite the race having a slow start, the Scot set a PB and ran the fastest ever time by a Briton in the World Championships.

The position matched unheralded Pete Whitehead’s superb fourth in 1995, but given the opposition and the time, there is no doubt Hawkins’ was the greatest performance.

Hawkins, who had completed just one race since his superb winter and there was doubt over his fitness, led through 10km in 31:35 with a pack of around 50 and the temp now lifting more towards 2:13.

The pace picked up further and the group was around 25 as Hawkins was ahead again after 40 minutes of running. The crowd in the stadium roared when it was shown Hawkins was leading on the big screens.

Hawkins was back in front sharing the lead at 20km in 62:15 but the crucial surge came just before halfway and three were away as the leaders passed halfway in 65:28.

The 5km stretch up to 25km was covered in a quite vicious 14:28 and the medals seemed to be between Kirui, Tola and Gideon Kipketer. They had a 12-second lead on Alpjonse Simbu (76:55) and London Marathon winner Daniel Wanjiru (76:58).

Hawkins was now back to ninth in 77:12, but had still covered that 5km inside 15 minutes and was clearly the top European born athlete, but at this stage he was trailing Turkey’s Kaan Ozibilen.

However, clearly the surge was too much and he quickly slowed and Kirui had caught him at right on the 35km point in 1:46:11, with the Kenyan passing him easily.

Kirui eased back slightly as he finished on Tower Bridge but he still ran 2:08:27 and he covered that second half in 62:59.

“This is easily the best moment of my career,” said Kirui. “I am so happy to win the world title and this was the best course and the best crowd I have seen at a marathon.

“I was not expecting to be world champion. I feared the Ethiopian because he had such a fast time, so I just followed my plan to 35km and then felt my body to see how I was doing. I was smart not to follow the Ethiopian. When he tried to take off I knew I had to hit my target at 35k then I started to move.”

The Ethiopian, who had had a 30-second lead for silver at 40km over Simbu, got anxious as the Tanzanian closed the gap in the last 2km but ultimately fell two seconds short with Tola timed at 2:09:49 to Simbu’s 2:09:51.

“I was sick,” Tola explained. “I was feeling the pain while I was running. I had a leg injury, my left achilles tendon, and I was treated for this leg injury in Germany by Dr Mueller-Wohlfahrt. Before the race I still felt a little pain. I am very happy and proud with my result and the course was difficult for me with so many curves and four laps, this makes it difficult for me. I have never run a course like this.”

He covered that last 2km quicker than those ahead but finished 26 seconds down on the medallists with his 2:10:27 which moved him from 27th to 17th all-time on the UK all-time lists.

“I didn’t care about the time and the PB was a bonus,” he said. “All that mattered was the position and I’ve worked really hard for this.”

Kipketer held on to fifth with former European champion Danielle Meucci in sixth.

Wanjiru did not enjoy his marathon as much as in April and was eighth in 2:12:16.

At 10km, both GB’s Josh Griffiths and Andrew Davies were back in the sixties in 32:00 which they maintained through 15km in 58:13 and they were still together at halfway in 68:02.

They found the second half much harder but Davies still came through the field well to end up a fine 31st in 2:17:59.

A total of 71 athletes finished.