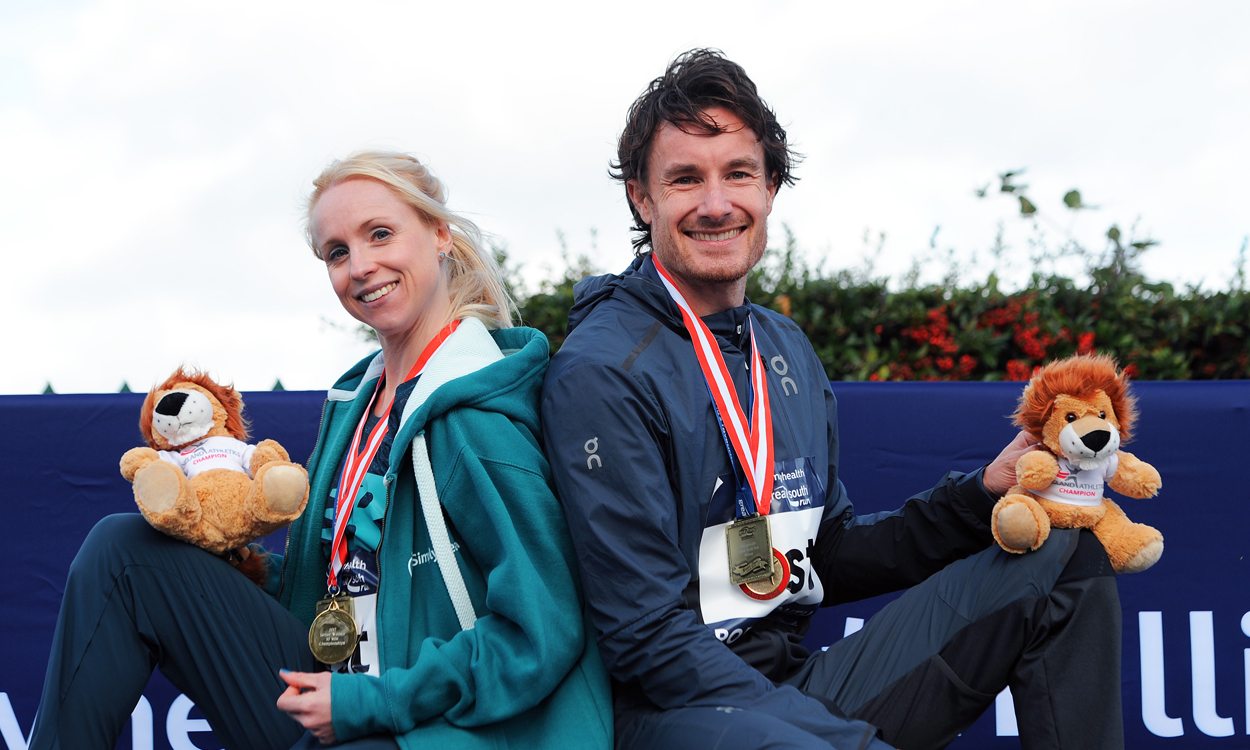 Chris Thompson and Gemma Steel secured success at the Simplyhealth Great South Run on Sunday (October 22) after exciting battles along the sunny but very windy Portsmouth and Southsea seafront.

Clocking 48:32 to finish three seconds ahead of Matt Sharp, who beat Ben Connor to the runner-up spot by one second, Thompson becomes only the second man to successfully defend the Great South title.

Steel, meanwhile, ran a well-judged race to overcome Lily Partridge and Charlotte Purdue while up against gusty headwinds during the final two-mile seafront stretch. The former Euro Cross champion clocked 55:25 to Partridge’s 55:37 and Purdue’s 55:43.

Always to the fore, Thompson was joined by English National cross country champion Connor, former world under-23 triathlon champion turned marathoner Sharp, Ireland’s Mick Clohisey and Peter Huck in a lead group of five at the two-mile mark through Portsmouth Historic Dockyard before 5km was passed in 15:06.

“That was a real tussle, a real head-to-head,” said Thompson, who had run 47:23 to win last year’s event ahead of his Aldershot, Farnham and District club-mate Andy Vernon. “There was no getting away from people because the conditions didn’t offer enough respite that I could push and get any kind of a gap. I had to think my way around – ‘how else can I win this?’

“I just tried my best between miles six and eight to set myself up so that when I made a move – and I had to be so patient and wait so long – it was something that I could hold on to.”

The 36-year-old, who has had a busy racing schedule with recent wins at the Bank of Scotland Great Scottish Run and Robin Hood Half Marathon, added: “Winning today shows I am still clearly passionate about it. I think it was my desire to win that won me that – my pure blind stubbornness to win.”

Sharp had been joined by English National runner-up Alex Teuten around 10 seconds behind Thompson and eight behind Connor with about half a mile to go but Sharp came through to join Connor with 200m remaining. The former triathlete won the battle for the runner-up spot while Teuten was just run out of the podium places in 48:38. His 20-year-old Southampton AC club-mate Mahamed Mahamed – the recent Cardiff Cross Challenge runner-up and Euro Cross under-20 medallist – was sixth in 49:05, one place behind Clohisey with 49:02.

In the women’s race, a large lead group was together through the dockyard and those at the front – including Steel, Partridge, Purdue, Sophie Cowper, Rebecca Murray and Katrina Wootton – continued on through 5km in 17:52.

Steel, Purdue and Partridge had created a three-second gap through 10km in 35:06 before Partridge pushed on at seven miles with 39:15 on the clock.

As Partridge reached eight miles, where the course turns back along the seafront, Steel started to catch her and pushed the race on with one mile to go.

“I was just biding my time basically and to pull it off is amazing,” said Steel. “Coming so close in 2014 – that was the icing on the cake. It’s long overdue. I’ve faced my demons!”

The Liz McColgan-coached athlete added: “I usually like to take it out at the front but I needed to have the patience to trust in my plan.”

Partridge, who was returning to road racing after being forced to drop out of last month’s Berlin Marathon, was also pleased with her performance.

“That felt more natural than last week’s cross country, that’s for sure!” she explained. “I feel like my fitness is on the up. I’m going to do some more cross country this year so hopefully the next cross will be a lot more comfortable.”

Another battle was going on for fourth place and there Murray came out on top, clocking 57:06 ahead of Wootton with 57:20.

With the event incorporating the England Athletics 10-mile Championships, the top three in both races also claimed championship podium places.

While the windy weather conditions weren’t ideal for the 10-mile event, the impact of Storm Brian had forced the previous day’s 5km, Junior and Mini Great South Run events to be cancelled.

» See the October 29 edition of AW magazine for much more in-depth coverage, including reports, news, pictures and results from Portsmouth and Southsea