GB’s Jemma Reekie and Shemar Boldizsar get gold in Gävle 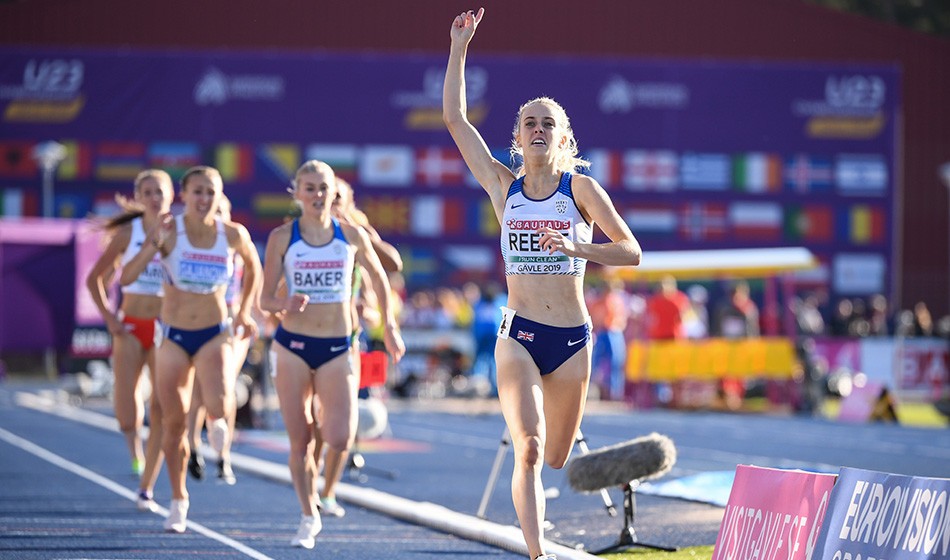 Great Britain gained two gold medals on the third day of action at the European Under-23 Championships in Gävle, Sweden, as Jemma Reekie and Shemar Boldizsar took titles in the women’s 800m and men’s 200m respectively.

After running wide to stay out of trouble, Reekie surged away over the final 200m to add an under-23 gold to the under-20 1500m title she won in Grosseto two years ago.

“This was very messy, so I tried to keep my cool,” said Reekie, who is a training partner of British 1500m record-holder Laura Muir under coach Andy Young and will contest the 1500m on Sunday.

“I knew I had to kick in to cross the finish line, because the other girls were right behind me.

“Today it’s very special. I’m so happy for Ellie – we grew up together and even share a room here.”

"It didn't go to plan at all but I just kept my cool."@JemmaReekie completed the first part of a middle distance double with gold in the 800m in #Gavle2019.

She will be back in action tomorrow in her favourite event: the 1500m. pic.twitter.com/nrI690uVcS

Nadia Power claimed bronze for Ireland but had a rollercoaster ride to gaining her medal as she was initially disqualified after crossing the finish line in third place in 2:06.68 before later being reinstated.

Boldizsar’s victory came in the day’s penultimate track final and the England under-23 champion continued what has been a superb year, clocking 20.89 (-0.1m/sec) for victory after a strong finish. 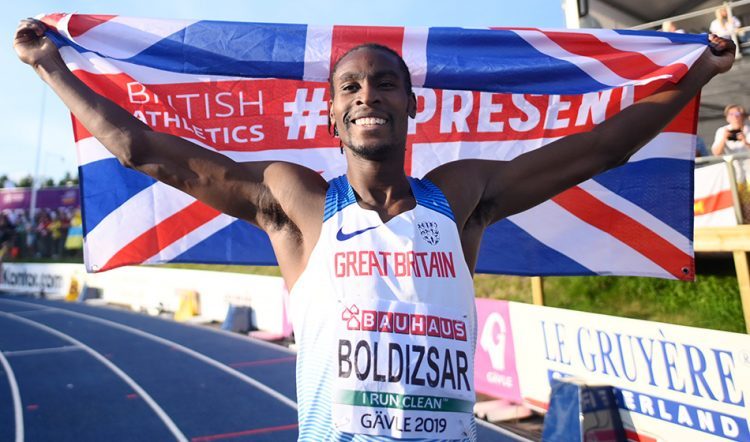 Powering down the home straight, the Harlow AC and St Mary’s University sprinter had a clear win over Belgium’s Kobe Vleminckx (21.04) and Ryan Zeze of France (21.05), as Boldizsar’s British team-mate Toby Harries finished fourth in 21.17.

“I wasn’t expecting to win,” said a shocked Boldizsar, who has improved his outdoor PB from 21.37 last year down to 20.65 this summer.

“I was trying to beat my personal best today. It didn’t happen but to run a good time in my first international out and about like this in another country and win gold, it is a good experience and hopefully I can do a lot more in the future.”

Another St Mary’s University student to impress was Anna Emilie Møller as the Danish athlete clocked 9:27.31 to take nine seconds off the championship best and retain her 3000m steeplechase title.

After cross-country success over the winter, Møller won the BUCS 5000m title in May and will be back on the track to contest that event in Gävle on Sunday.

Britain’s Aimee Pratt had been second behind Møller at the bell but struggled in the closing stages, slowing to a walk and eventually crossing the finishing line in 10:18.98 for 11th.

Ireland’s Eilish Flanagan secured silver in a PB of 9:51.72, while bronze was claimed by Romania’s Claudia Prisecaru (9:53.21 PB).

Another silver was secured for GB in the men’s 400m as Cameron Chalmers led into the home straight but France’s Fabrisio Saidy finished strongly to pass him in the final metres, clocking 45.79 to the Briton’s 45.92.

There was a second women’s sprint title for Poland as after her compatriot Ewa Swoboda won the 100m title, the 400m gold was claimed by Natalia Kaczmarek in a PB of 52.34.

German athletes claimed a clean sweep in the women’s shot put as Alina Kenzel got the gold with a throw of 17.94m ahead of team-mates Katharina Maisch (17.64m) and Julia Ritter (17.17m) as GB’s Divine Oladipo finished fourth (16.79m).

Spain’s Alberto González won the hammer title with a PB throw of 74.36m as GB’s Jake Norris was ninth with 68.64m.

Germany’s Bo Kanda Lita Baehre went one better than his European under-20 silver from two years ago as he cleared 5.65m to win pole vault gold as GB’s Charlie Myers, Joel Leon Benitez and Adam Hague were fifth, sixth and seventh after they all cleared 5.50m.

In qualifying action, GB’s Alex Knibbs secured his place in the 400m hurdles final after running 50.56 which placed him fourth in his semi-final.

Tom Gale (high jump), Alice Hopkins (long jump) and the men’s 4x400m team all progressed for GB in the morning session, securing spots in the finals of their respective events.

Results can be found here, while a report on day one action is here and a day two round-up is here.

BRITISH RECORD! @_MarcScott clocks 13:20 (all times are tbc) to win the elite men's race at the @podium5k in Barrowford and break the UK 5km road best. @Lixsanyee also under the old record time (13:27 by Nick Goolab) with 13:26.

Nick Goolab holds the current UK 5km road best with his time of 13:27 recorded in Monaco in February.