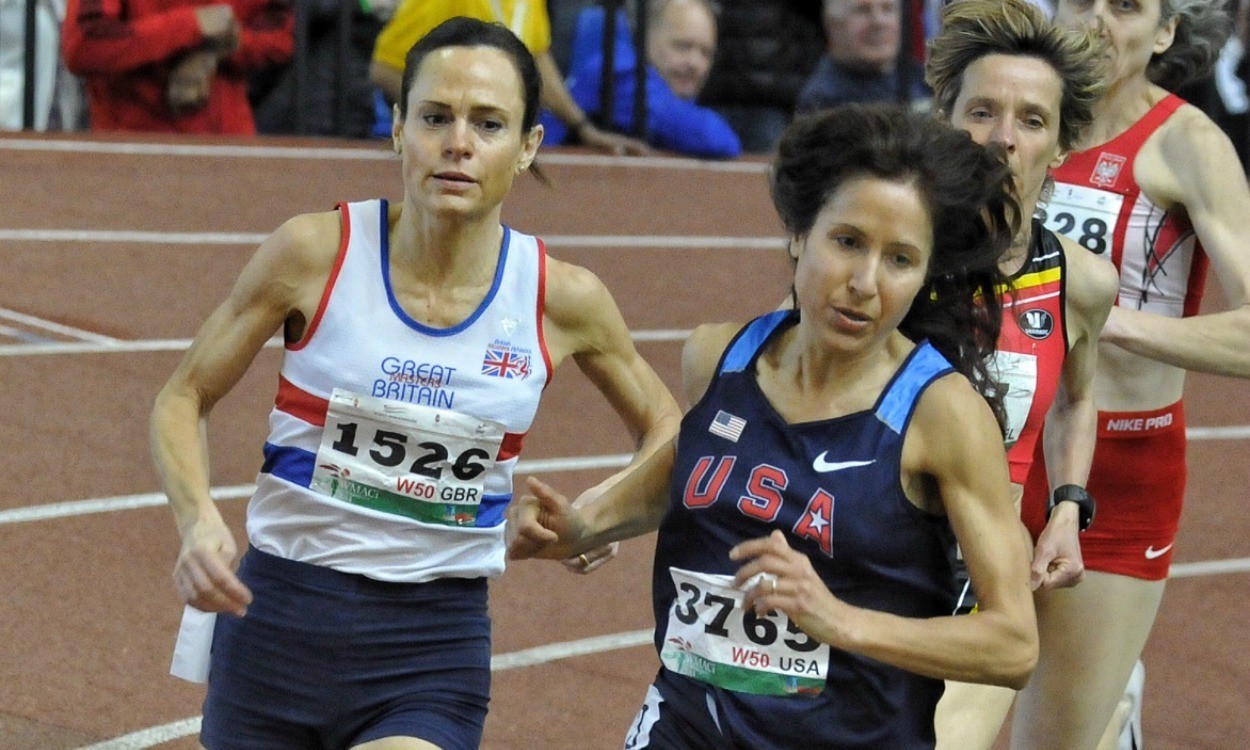 Britain had their best day yet on the final day of the World Masters Championships in Budapest.

James Thie, Anthony Whiteman, Angela Copson and Clare Elms (pictured above in 800m action) completed their distance triples on the track by winning their 1500m races in style. Copson had also already won the cross-country and for good measure won a bronze in the 400m and a team gold on the country.

There was also a 1500m gold for W45 Bernadine Pritchett.

Former British senior champion Owusu, who has a 52.06 indoor PB, easily won the 400m as she controlled the race from the start to win in 56.51. She is hoping to make the Commonwealth Games team this summer. She had medalled in the 60m and 200m and felt the number of races, including heats, had affected her. Susie McLoughlin was third in 57.43.

Owusu and McLoughlin then teamed up with W35 200m champion Ellena Ruddock and Susan Young to win 4x200m gold in 1:43.74 to win by three seconds from Spain.

In other relay action, Britain’s M55 team set a world record of 1:40.59 and the W55 team also broke the record with 1:55.90, with the team including high jump and long jump champion Carole Filer, who also won medals in the 60m, 200m and hurdles.

Whiteman likewise didn’t want to do all the work and the early pace was slow before he opened out with devastating fashion. He covered the last 800m in 1:57.3 and the last 400m inside 57 seconds as he won by nearly ten seconds in 3:57.00.

Elms had her vest and spikes taken after her heat and had to borrow 400m finalists Sally Read-Cayton’s spikes and Laura Mahady’s vest. She followed cross-country champion Fiona Matheson around until two laps out and blazed the last lap to win in 4:44.89, which was announced as a W50 world record but she already had a quicker unratified record from earlier in the season in the UK. Matheson was a clear second in 4:52.43.

Bernadine Pritchett had come agonisingly close to 800m gold, having been passed in the final strides, but she made no mistake in the 1500m and gradually wound the pace up to win convincingly in 4:49.85.

Silver medals were also won in great numbers by the Brits. W35 Louise Rudd was outkicked in a furious last lap burn up in the 1500m and ran 4:40.45 while John Thomson made a brave front-running attempt but couldn’t quite run off his Russian shadow of Zagotov Zhavdat. The Briton timed 4:28.56.

There were also silver medals for M50 Simon Anderson, who injured himself after his British Masters triple and had to drop out of the 3000m but his leg injury held up as he wore trainers and he ran a fast 4:15.05, and Adrian Haines, who ran 4:10.47 for second in the M45 1500m.

World Masters outdoor champion and reigning European indoor champion David Cowlishaw, who had been joint fastest with Haines in the heats, had his shoe taken off early on and it took over half a minute for him to put it back on. He rejoined the race a lap behind and was in a false second position with a few laps to go, with not all competitors realising he wasn’t challenging for a medal. He slowed to encourage Haines and did his extra lap after most had finished but was later disqualified.

Pete Molloy, who medalled in the cross-country, 800m and 3000m and gained a team cross-country gold, also won bronze in a close run M65 1500m race.

The non-British highlight at 1500m was Ireland’s Brian Lynch annihilating Britain’s Dave Oxland’s M60 world 1500m record by ten seconds. The Irishman pushed on after a steady start with a superb front-running performance from the man who only began running at 50. He would have run even quicker too, had he not prematurely celebrated and eased back. Both second and third also beat the old mark.

Ros Tabor, who narrowly missed gold in the cross-country and was second in the 3000m, decided not to run the 1500m and instead she focused on the half-marathon. She won gold in 1:35:40 just over 20 seconds ahead of her conqueror of the cross-country.

Organisers were unable to provide results for anything but a handful of events on the final day as this report was published. Full details of additional track and field finals and relays will be Thursday’s Athletics Weekly.