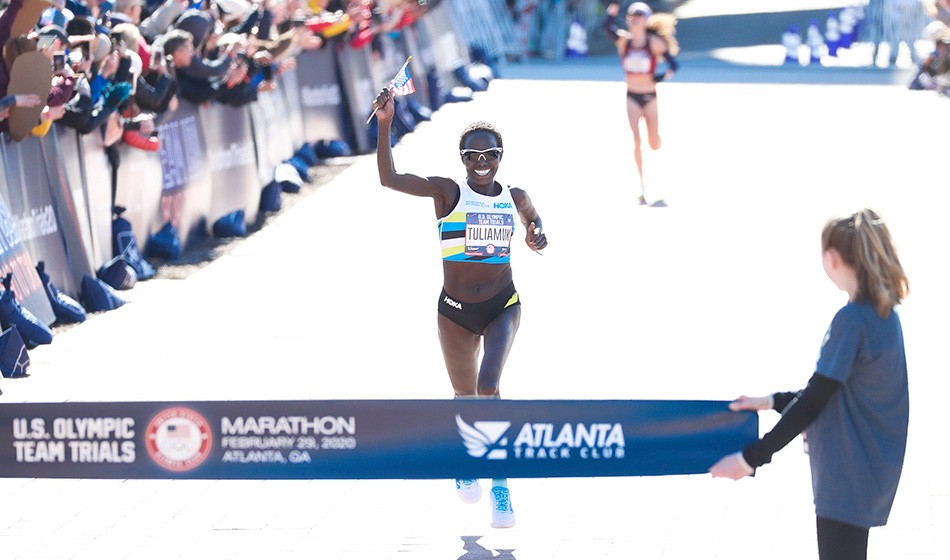 The US Olympic marathon team was decided in thrilling style on Saturday as Galen Rupp and Aliphine Tuliamuk won the trial races in Atlanta to lead some surprise results.

Two-time Olympic medallist Rupp will be joined on the men’s squad by Jacob Riley and Abdi Abdirahman, while Tuliamuk’s women’s team-mates will be Molly Seidel and Sally Kipyego after the six athletes overcame the challenging hilly course and cold, windy conditions as well as their rivals to triumph in a ‘first three past the post’ selection battle.

Winning his second consecutive US Olympic trial marathon, Rio bronze medallist Rupp clocked 2:09:20 to finish 42 seconds ahead of the unsponsored Riley, whose comeback after injury issues saw him secure his first Olympic place.

Behind Rupp it was a close fight for the two other team places, with 43-year-old Abdirahman just one second back in third to make his fifth Olympics, while 2016 trials third-placer Leonard Korir just missed out this time, running 2:10:06 for fourth place. 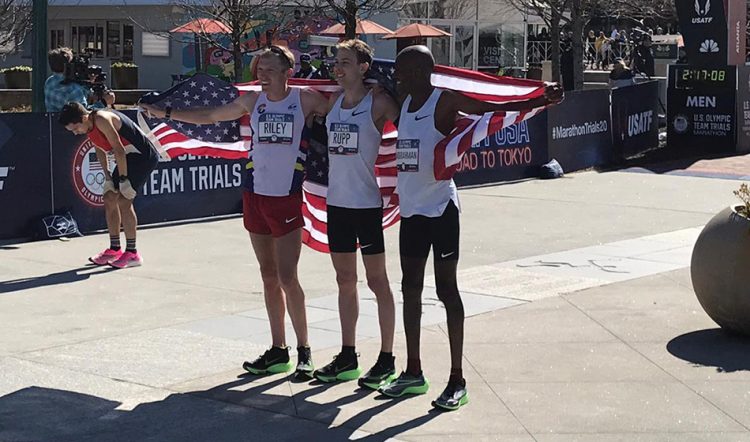 The races featured many stories of strength and resilience, particularly in the women’s contest where Seidel secured the second women’s team place after clocking 2:27:31 on her marathon debut behind Tuliamuk’s winning 2:27:23, while Kipyego ran 2:28:52 to make her first Olympics for the USA after claiming 10,000m silver for Kenya in 2012.

Desiree Linden had been among the favourites going into the race but despite finishing strongly the 2016 Olympic seventh-placer couldn’t close the gap on Kipyego and finished fourth in 2:29:03.

“I actually still don’t believe that happened,” Tuliamuk, who was born in Kenya as one of 32 siblings and became a US citizen in 2016, told NBC.

“Making the Olympic team is my way of showing my gratitude to this beautiful nation that has given me so much.”

The 30-year-old, who is sponsored by Hoka One One, suffered a stress fracture in her femur last year before returning to finish 12th in the New York City Marathon in November. During her time out, she taught herself crochet and was wearing a self-made red, white and blue beanie after the race. During a previous injury in 2018, she drove for Uber to keep busy.

While Tuliamuk was continuing her return after injury, Seidel had her own comeback story. The 25-year-old former NCAA champion has spoken openly about the disordered eating and depression she experienced in the past and surprised herself with a debut marathon run in Atlanta which saw her gain a first Olympic place.

“I didn’t think I was going to be here,” said Seidel. “I’m still in shock right now.”

Kipyego has become a mother since winning Olympic and world medals on the track and she managed to hold off 2018 Boston Marathon champion Linden to ensure an Olympic return.

In Atlanta the quartet had formed part of a 23-strong group which went through eight miles in 45:57, with Laura Thweatt, Emma Bates and Emily Sisson having been among those to the fore.

The lead pack was reduced to 14 by the half-way point, which Thweatt led through in 74:38.

By 20 miles the group was down to seven, as Tuliamuk, Seidel, Kipyego, Linden and Thweatt were joined by Kellyn Taylor and Emma Bates with the the clock showing 1:53:03 at that point.

Tuliamuk and Seidel broke away and were together through 23 miles in 2:09:15, with Kipyego 22 seconds behind.

The 25-mile mark was passed in 2:20:29 before Tuliamuk made a move and started to pull away.

In the men’s race, which saw an early lead by 2016 trials fourth-placer Luke Puskedra, Dan Nestor and Brian Shrader pushed ahead and led by around 20 seconds at seven miles.

Rupp pushed on at the front and 20 miles was passed in 1:38:51, as Augustus Maiyo and local athlete Matt McDonald of the Atlanta Track Club were three seconds behind him, with Abdirahman another four seconds back.

Rupp continued to grow his advantage and went through 24 miles in 1:58:10, 54 seconds ahead of Abdirahman, Maiyo and Korir, but Riley was closing fast.

Riley, who was 15th at the 2016 trials but struggled with injury, was diagnosed with Haglund’s syndrome and required surgery in 2018 which led him to wonder if he would ever race as an elite again, came through to pip Abdirahman into third.

“Going into this race coach said you’ve got to be ready for every scenario,” said Rupp, who was previously coached by the now-banned Alberto Salazar but is currently working with Northern Arizona University coach Mike Smith.

There had been much discussion in the lead-up to the race on the impact of Nike’s carbon-plated shoes, but addressing that, Rupp added: “You can’t just put those shoes on anybody and they turn into Superman. I’ve trained really hard for this.”

The US team now has five months to prepare for the Olympic marathon races, which will take place in Sapporo on August 8 and 9.