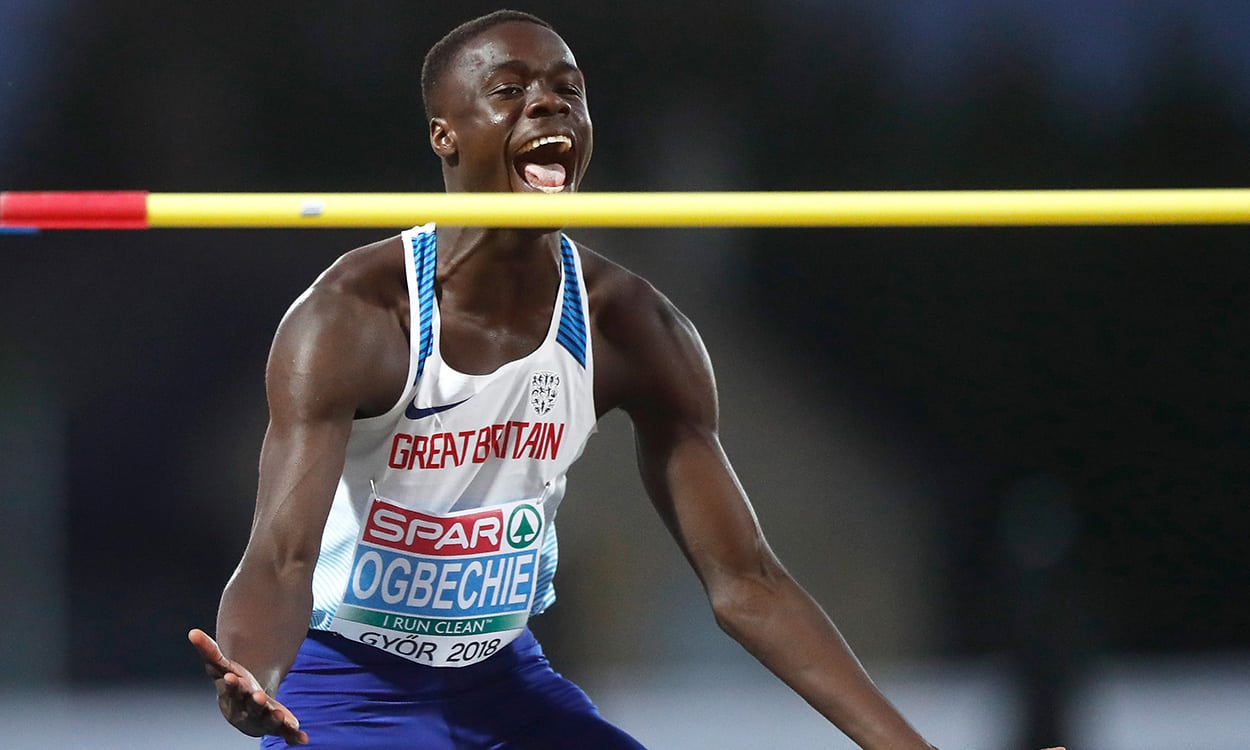 A number of successful athletes from last weekend’s continental championships in Gyor, Hungary, are back on track and going for gold in Birmingham this week

All athletes to have competed at the Euro event in Gyor will be congratulated during a special parade during the English Schools at the Alexander Stadium. They will then try to win a national schools title at one of the world’s biggest and most historic track and field championships, which is taking place for the 88th time on Friday and Saturday (July 13-14).

They include Dominic Ogbechie (pictured) – the multi-talented London athlete won Euro under-18 high jump gold and took the long jump title at last year’s English Schools and this time goes in the inter boys’ 200m.

Another European under-18 champion, Max Burgin of West Yorkshire, sticks to his specialist 800m event as he attempts to win inter boys’ 800m gold after finishing runner-up last year in a tight race with Oliver Dustin.

Sam Bennett, the European under-18 champion at 110m hurdles, represents Essex in Birmingham this week in the senior boys’ age group, while Karl Johnson, a bronze medallist at 400m hurdles in Hungary last weekend, is in the same Essex team.

Thomas Keen of Cambridgeshire was the first Briton to win a gold medal in Hungary last week when he won 3000m gold and he tackles the senior boys’ race in Birmingham.

Raphael Bouju, who won the European under-18 100m title representing the Netherlands in Hungary last weekend, is also competing in Birmingham for Bedfordshire.

GB shot putters who competed in Hungary, Lewis Byng and Serena Vincent, are also both in action at the English Schools in the throws.

Byng, from Warwickshire, will be hoping to move up from English Schools silver in 2017 to gold this week, while Vincent of Hampshire was in UK under-18 record-breaking form in Hungary and she’ll be going for gold in Birmingham.

Ethan Brown was a close runner-up in the 400m at the Euro Under-18 Championships and in Birmingham he competes for Kent in the senior boys’ age group.

Similarly, Emily Williams was runner-up to Sarah Healy of Ireland in the 1500m in Hungary and will race for Northamptonshire in the English Schools.

Elsewhere, in the senior boys’ discus Alfie Stokes of Kent will be aiming to win his fifth English Schools title.

Zakia Mossi of Middlesex is one to watch in the junior girls’ 800m, while in the senior girls’ 800m Khai Mhlanga is going for her fourth English Schools track title.

A timetable can be found here.

» See the July 19 issue of AW magazine for 12 pages of reports, photographs and news from the 2018 New Balance English Schools Championships. Plus, keep an eye on AW’s social media and website for updates