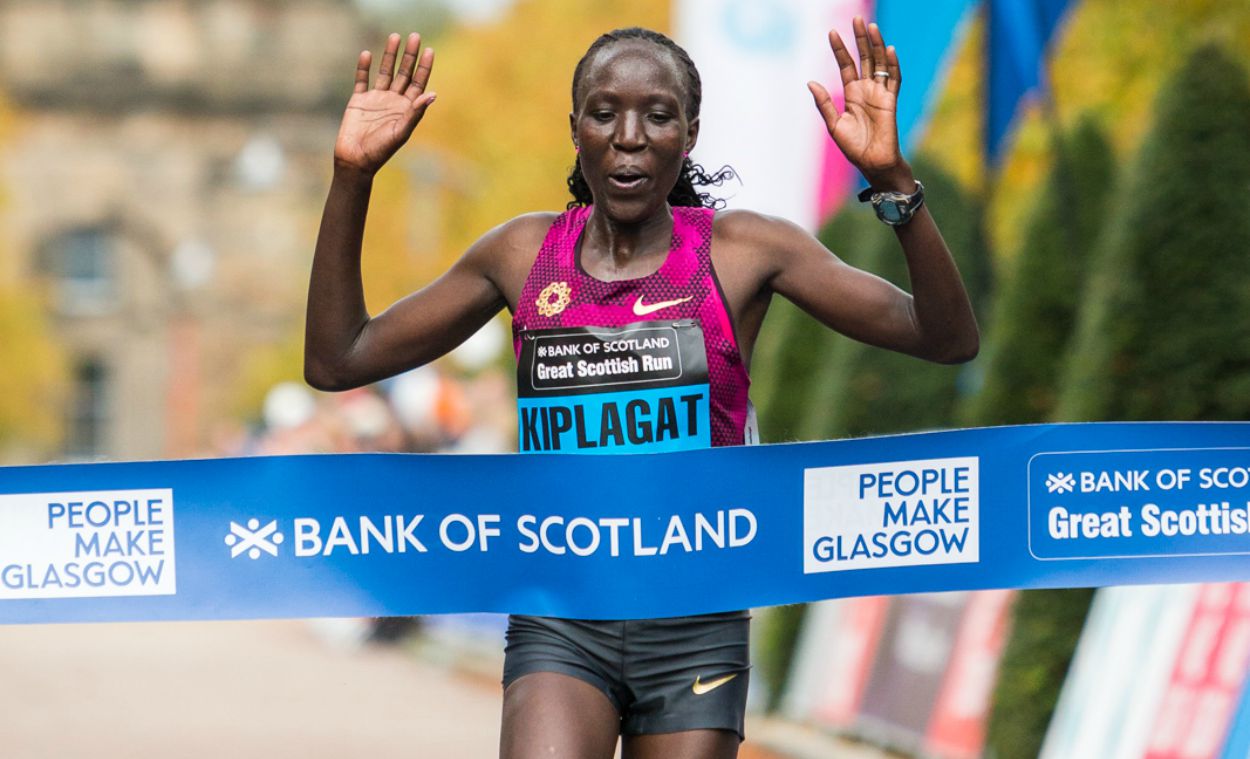 Course record-holder returns to defend her title, while Jo Pavey, Gemma Steel, Moses Kipsiro, Japheth Korir and Isiah Koech are also among those in action in Glasgow

Edna Kiplagat will look to retain her Bank of Scotland Great Scottish Run title when she races in front of Glasgow crowds and a TV audience on Sunday (October 4).

The event is to be televised live on BBC Two from 11:00 to 14:00 and will see the two-time world marathon champion go up against the likes of Britain’s Gemma Steel and Jo Pavey over the half-marathon distance.

With a PB of 67:41, Kiplagat will be difficult to beat, especially if she repeats the sort of form she produced in the 2014 race. The 35-year-old, who won last year’s London Marathon, finished a clear victor in 67:57, breaking Joyce Chepchumba’s 14-year-old course record by 55 seconds.

Britain’s European cross-country champion Steel, after finishing runner-up in her last outing at the Great North Run, could be one of her biggest challengers, along with Kiplagat’s fellow Kenyan Caroline Kilel, the Commonwealth 10,000m silver medallist, who was runner-up in the race last year.

Following a quiet summer, European 10,000m champion Pavey is back and may threaten the UK over-40 best of 71:44, which has stood for 28 years. Portugal’s Sara Moreira, who was third in the New York City Marathon last year, and Kenya’s Doris Changeywo, runner-up in the 2014 Great Birmingham Run, cannot be discounted, while Scottish hopes in the women’s race are led by Commonwealth representative Beth Potter.

Joining Potter in action in Glasgow will be her fellow Scots Callum and Derek Hawkins. Callum, who placed second Brit behind Mo Farah in the Great North Run, will be hoping to make an impact on home soil as he builds up to the Frankfurt Marathon on October 25, while his older brother Derek has run 64:07 for the distance.

They will face opposition in the shape of Uganda’s Commonwealth 10,000m champion Moses Kipsiro and Kenya’s Isiah Koech, who took silver in the 5000m at Glasgow 2014.

Marathon world record-holder Dennis Kimetto had been due to line-up but has been forced to withdraw through injury, but the field does include his fellow Kenyans Japheth Korir, the 2013 World Cross champion, and Emmanuel Bett, who was second in the Great Birmingham Run last year in 60:08.

Hoping to challenge for the top Brit honour will be Jonny Mellor,who after winning the Great Yorkshire Run for the second time last weekend will be looking for quicker than his 65:25 from the Great North.

Simon Lawson, Jade Jones and Sammi Kinghorn are the main contenders in the wheelchair races.

Haile Gebrselassie was set to bid farewell to competitive running by taking part in the 10km event, but the Ethiopian long distance great will no longer be making the trip to Glasgow as his eldest sister is seriously ill.

Although half-marathon entry has now closed, spaces in the 10km event are still available via a pop-up shop in St Enoch’s Centre.