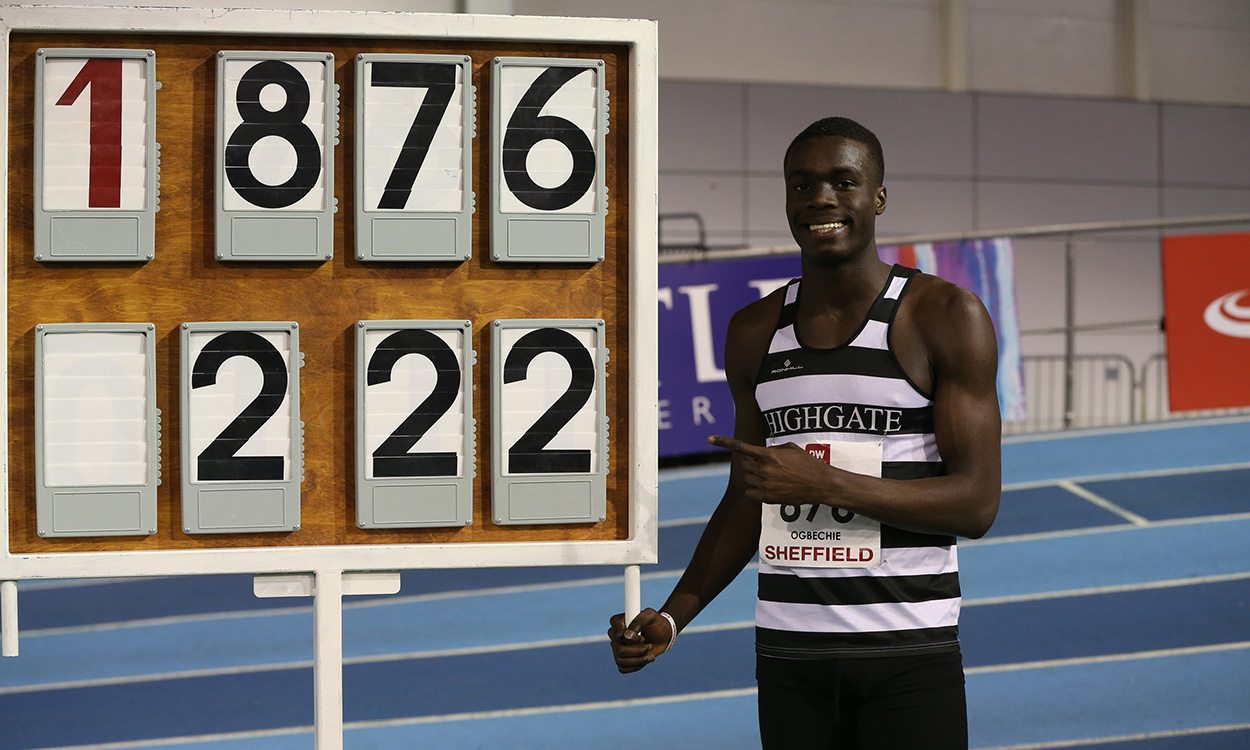 On a busy weekend with the Müller Indoor Grand Prix in Glasgow and all the various National cross country championships, there was still plenty of other notable action.

Dominic Ogbechie won the under-17 high jump in a superb 2.22m, to set a world age-15 record. It was actually higher than the senior British Championships winner achieved the week before.

The Highgate athlete’s previous best was 2.12m and he set UK under-17 records of 2.14m and 2.18m earlier in the competition.

It was not his only performance of note as he also won the long jump in another national under-17 record with a 7.53m jump. His previous legal best was 7.22m.

Serena Vincent won the under-17 girls shot in a British record of 16.59m, adding a metre to the record.

The best contest of the weekend came in the long jump where Holly Mills and Eleanor Broome swapped the lead, with Mills’ final 6.23m eventually overhauling her rival’s final jump of 6.17m.

There was a 200m victory by Charlie Dobson who clocked 21.02 for the fastest time by a GB junior in a decade.

Joe Ellis equalled the British weight throw best with 23.64m to match a mark set by Robert Weir in 1983. Jake Norris followed that up by breaking the junior record with 20.48m.

See this week’s magazine for a full report and photographs.

For the first time in history, eight athletes cleared 5.81m or more in the same pole vault competition and the event was won by world champion Sam Kendricks with 5.93m.

The results for positions five to seven were the best ever indoor or outdoor.

World-leader Katie Nagoette won the women’s competition on count back over 2014 European champion Anzhelika Sidorova as both cleared 4.86m.

The 2015 world under-18 400m hurdles champion Sydney McLaughlin clocked a world-leading 50.52 to break the world indoor under-20 400m record which had been set by Sanya Richards-Ross.

Dickson Chumba regained the title he won in 2014 with a fast 2:05:30, though in many ways it was overshadowed by Yuta Shitara who clocked a Japanese record of 2:06:11 in second.

He improved the 16 year-old record and gained a million dollar bonus as a total of six Japanese athletes went sub-2:09.

Birhane Dibaba of Ethiopia won the women’s race with a faster second half to set a 2:19:51 PB just four seconds off the course record.

The women’s winner was Moroccan Kaoutar Boulaid who was second in 2016 and achieved a course record and PB of 2:25:35.

She was closely followed by two Ethiopians, Shewe Hayimanot Alemayehu in 2:25:47 and Badane Bedatu Hirpa in 2:25:50.

Fourth was Javi Guerra who won the Spanish title and qualified for the European Championships in Berlin with a 2:08:33 PB.

» Further coverage and results in the March 1 edition of AW