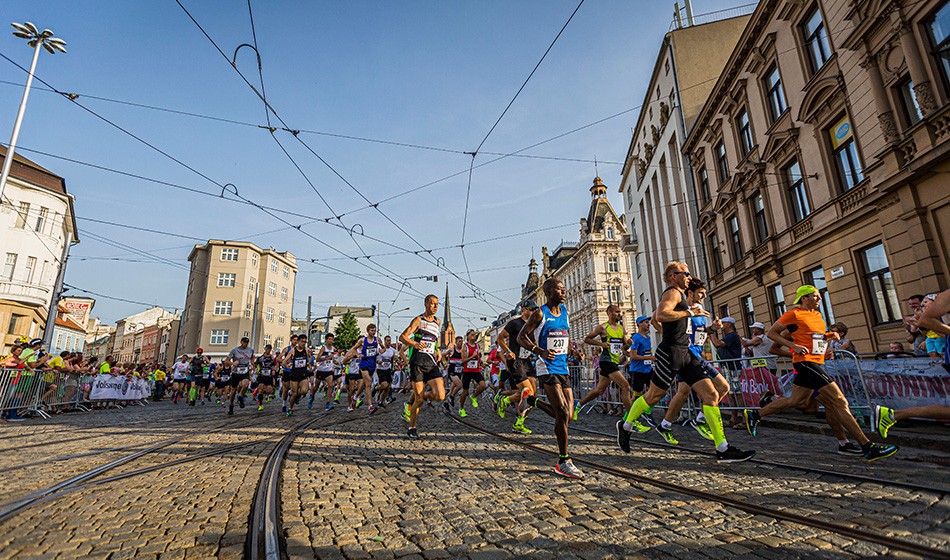 Described as a ‘hidden treasure’ of Europe, Olomouc is situated 179 miles south east of the Czech capital of Prague and for the past 10 years the city has welcomed runners for the annual Mattoni Olomouc Half Marathon.

The event forms part of the RunCzech series which now features nine races in the Czech Republic, including the popular Volkswagen Prague Marathon in May and the Birell Prague Grand Prix in September, plus two in Italy.

The series also incorporates initiatives such as the RunCzech Running League and EuroHeroes Challenge, designed to encourage both recreational runners and elites.

This year’s Olomouc Half Marathon took place on Saturday June 15, with a total of 10,078 runners taking part in the day’s events – 3597 in the family run and 6481 in the half-marathon, including me!

The ancient capital of Moravia is a beautiful, historic city which boasts impressive Baroque architecture, including the 32-metre-high Holy Trinity Column, a UNESCO World Heritage Site.

It is from the main square Horní námestí, where the Holy Trinity Column can be found, that the Olomouc Half Marathon starts and finishes.

The sixth-largest city in the Czech Republic, Olomouc is home to around 100,000 residents as well as an ancient university, the original medieval astronomical clock, six Baroque fountains and many other fine and unique monuments. 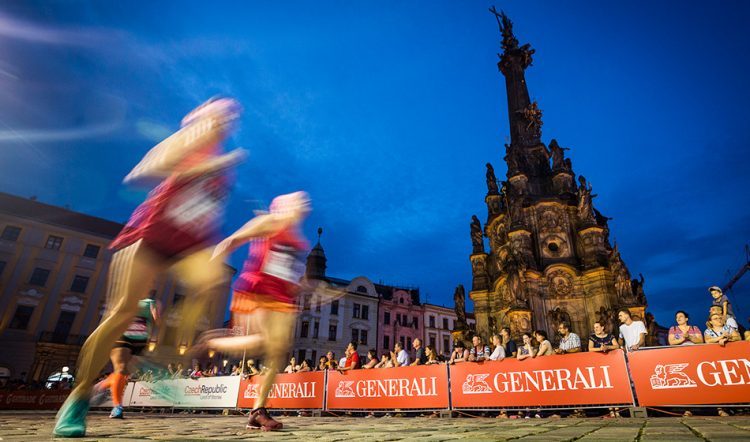 The three main parks – Smetana, Cech and Bezruc – cover an area of almost 50 hectares, with Smetana Park home to the Flora Olomouc exhibitions which the half-marathon route passes through.

“Olomouc is the historical capital of Moravia with such a concentration of monuments,” says Olomouc guide Stefan Blaho. “Prague is so packed with tourists. If you want to relax, just come to Olomouc because it is quiet and I think it is a little bit like a hidden treasure in Europe.

The Mattoni Olomouc Half Marathon offered a couple of firsts for me as I had never before visited the Czech Republic and I had also never taken part in an evening road race. I was excited to experience both!

Arriving on the Friday, I took in some of the city’s stunning sights on my way to pick up my race number at the Moravia Sport Expo on the edge of the Smetana Park. It was a quick and easy process.

I arrived as the family event was taking place and there was a nice vibe in the Horní námestí start and finish area, which was a short walk from the bag drop and toilets.

Heading to the start line I knew I would need to run well within myself as the temperature was still 30°C and the recent English weather hadn’t acclimatised me to that sort of heat!

There was a great mood as we took to the starting pens, with the music and location making it feel very atmospheric.

The square was lined with spectators as we headed on to the cobbled section of the course and out into the city. The heat was quite intense but, by around 8km, where the route heads out of the city and is much more open as it passes fields, the temperature had cooled slightly and there were frequent water stations and showers to pass through, as well as bands playing as part of the Marathon Music Festival. 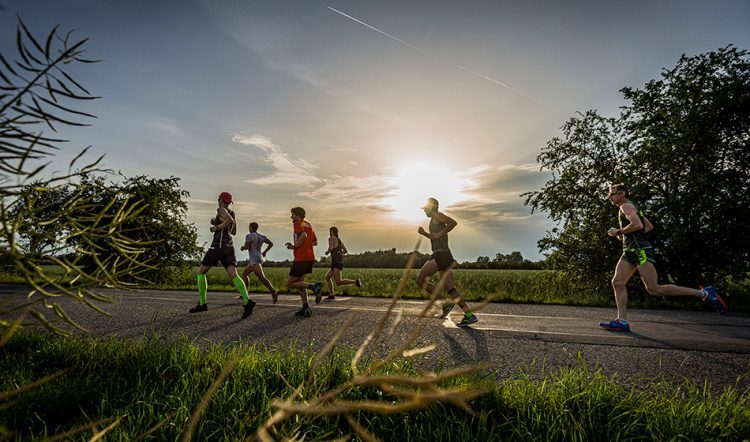 I’ll admit I began to feel a little under the weather from that point on but there was great support as I wound my way back towards the Horní námestí from fellow runners, marshals and spectators. I was well looked after when I crossed the finish line and received my hard-earned medal!

Launched in 2018 with the support of European Athletics, the EuroHeroes initiative aims to highlight new sporting stars from the continent and motivate the public to get active. The inaugural series featured two events – the Mattoni Karlovy Vary Half Marathon and Mattoni Ceské Budejovice Half Marathon – and this year it has expanded to include the Olomouc event and another half-marathon in Ústí nad Labem on September 21.

All four events in the 2019 series have a five-star certification rating from European Athletics Running for All, a cornerstone of the governing body’s running strategy, which requires organisers to have fulfilled a stringent set of safety, organisation and quality checks.

The EuroHeroes Challenge, which offers an additional prize structure, requires athletes to compete in at least two of the four series events and points are achieved at each event, with the two highest sets of points contributing to each athlete’s ranking.

“This is a sport that has tremendous success,” says RunCzech president and IAAF Road Running Commission chairman Carlo Capalbo.

“It’s phenomenal. It needs fans and a TV audience. We needed to create local legends.”

He adds: “Of course, our races are open to everybody, but there is a focus in terms of elite – only European athletes in order that we can support our champions. Above all, there is one main goal – to inspire more and more people.”

From next year, the hope is that winners of the EuroHeroes Challenge will receive a wild card entry into the European Championships half-marathon, with Capalbo explaining that it is set to be discussed at the next European Athletics Council meeting.

Britain’s 2016 European 5000m medallist and two-time Olympian Steph Twell was among those in Olomouc and after finishing fifth in 75:57 explained how she is looking forward to seeing the initiative develop. 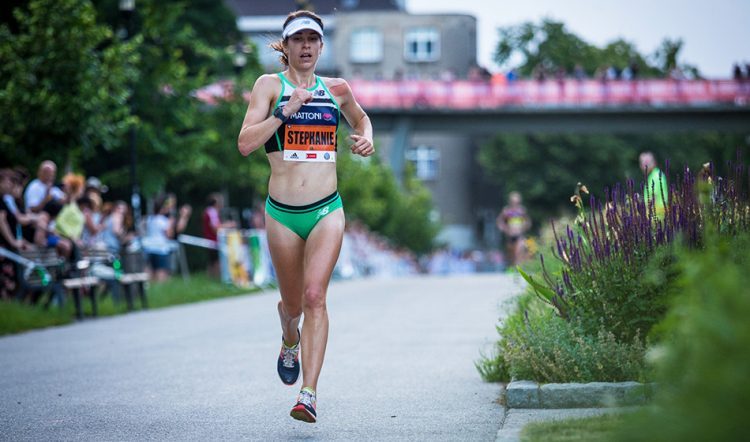 “The EuroHeroes concept has great room for potential to create more windows of opportunity for athletes to compete across the year,” said the British 10km road champion.

“I think this is a great platform to really take off on, to understand my new competition in this half-marathon distance, who will also run the marathon.

“It’s an opportunity now to help support myself a little bit. I think it opens a lot of potential for the future to incorporate planning my training and racing around something that can support athletes.”

The elite women’s race was won by Lilia Fisikovici of Moldova in 73:32, while Italy’s Yassine Rachik claimed men’s race victory in 64:26. Read more on the elite races here.

My trip included a flight from London to Prague, which takes less than two hours, and then an onward three-hour journey by car.

However, train travel is also popular and from Prague airport visitors can hop on the AE (Airport Express) bus for 60 CZK (around £2.10) for a 30-minute journey to hlavní nádrazí (‘the main train station’). From here, there are several types of train that can be taken, including the yellow trains of RegioJet for a journey which will take around 2.5 hours.

Once in the city, transport is provided by a network of tram and bus lines. Staying at the NH Collection Olomouc Congress, I was just a 15-minute walk from the city centre so was able to travel by foot.

Active Times is the official ground handler for RunCzech events, with hotel packages, airport transfers, tours and other activities on offer.

RunCzech’s authorised travel agencies for the UK are 209events.com and runningcrazy.co.uk

» See runczech.com, where entry is now open for 2020 events, and czechtourism.com