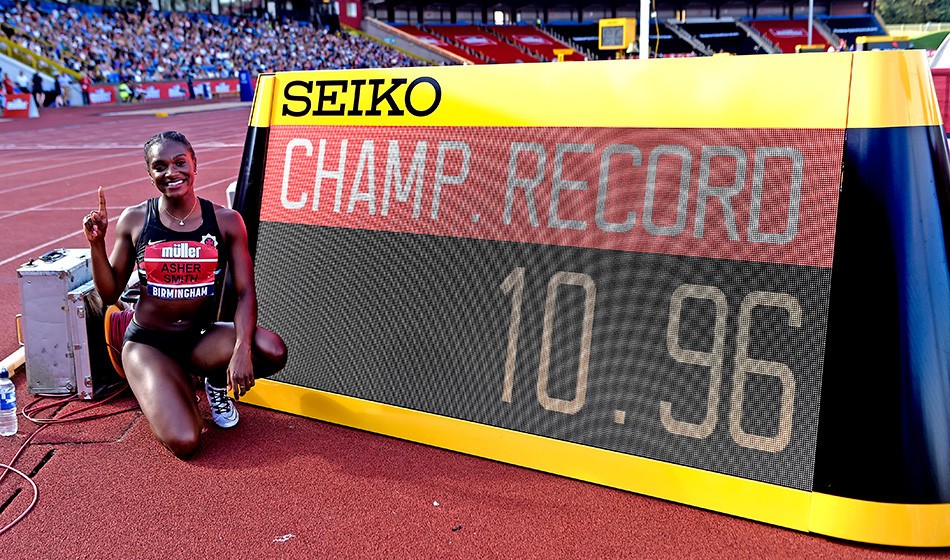 Dina Asher-Smith secured another national title and world championships spot in style as she broke her own championship record to win the 100m on a sunny and hot first day at the Müller British Athletics Championships.

Clocking 10.96 into a -0.9m/sec headwind, the triple European champion was left pleased with her performance but frustrated with the conditions as her earlier impressive time of 11.03 into an even stronger headwind of -2.0m/sec during the semi-finals saw her sub-11 second streak of 2019 come to an end.

“In the first race I saw 11.03 and obviously I was happy to have won and it’s a really strong time considering the headwind, but I was playing a game with myself so I was like ‘damn it!’,” she said with a smile, having had an aim to dip under 11 seconds for all of her races this year. “Then the second race, I was just going for the win.

“I crossed the line and was happy to have won but to see it get rounded down to a championship record considering the headwind again was great news for me because it means I’m in better shape than a month out from Berlin last year.”

“A fourth world championships at 23, it’s not bad. Hopefully here’s to four more!” Interview with @dinaashersmith after her impressive performances in windy conditions to win the British 100m title & book her place on the team for @IAAFDoha2019…
Report ➡️ https://t.co/BnZsQd3PY3 pic.twitter.com/ddY8qgJ0Pj

Behind her, Asha Philip again proved her strength as a championship performer as she ran a season’s best of 11.29 to secure silver and will now chase the IAAF World Championships qualifying time of 11.24.

It was a fine return for the four-time British champion, who struggled with injury after the IAAF World Relays.

“I’m so happy I got top two,” she said. “The fact that I performed when I needed to, I’m really happy about that.

“I’ve got semi automatic qualification because I haven’t got the time yet but with one more week, I’m sure I’ll get it.”

Two more Doha places were booked in the women’s 3000m steeplechase as Rosie Clarke retained her title in 9:46.66 as she beat Elizabeth Bird in an exciting finish, with Bird just behind in 9:46.95 to also secure her world championships vest.

Aimee Pratt was third in 9:53.24 as the top three finished well clear of the rest of the field. 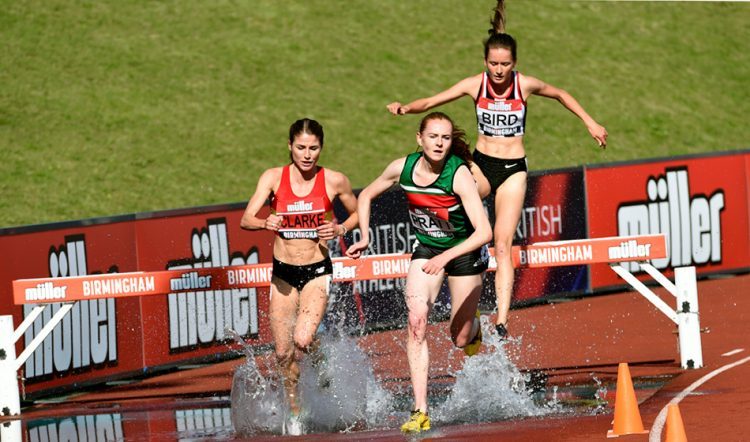 After two silver and three bronze medals, shot putter Sophie McKinna won her first British outdoor title with a best throw of 17.97m to also secure her spot on the team for Doha.

All five of her valid throws were over 17.62m and would have been enough to win, as Amelia Strickler was second with 17.09m and Divine Oladipo third with 16.38m. In between racing in the 100m hurdles heats and final, heptathlete Katarina Johnson-Thompson threw a best of 12.60m, while Paralympic bronze medallist Sabrina Fortune threw 12.26m.

Johnson-Thompson went on to run 13.57 (-1.6m/sec) for fourth in a hurdles final won by Cindy Ofili in 13.09, as the Olympic fourth-placer remains on the hunt for a world championships standard.

Naomi Ogbeta was delighted to have retained her title in the triple jump as the European finalist leapt 13.87m for victory ahead of Angela Barrett with 13.22m and Mary Fasipe with a PB of 13.07m.

Interview with @NaomiOgbeta after her British triple jump title win in Birmingham. She’s not sure now whether she will chase the @IAAFDoha2019 standard or end her season ahead of targeting @Tokyo2020. #MullerBritishChamps pic.twitter.com/J8Kej1Yx7e

The women’s hammer saw a different British champion for the first time since 2010, with Jess Mayho gaining gold with a throw of 64.79m.

Annabelle Crossdale was silver medallist with a 61.95m PB and Pippa Wingate the bronze medal winner with 58.85m.

“I’m just so happy to get on the top of the podium,” said Mayho, who last year secured silver behind British record-holder and eight-time British champion Sophie Hitchon, who has called an early end to her season.

“I’m never normally speechless but today was just so good. It maybe wasn’t the series I wanted but with championships, it just takes one throw and that’s what I did today.”

With English discus record-holder and seven-time British champion Jade Lally watching from the stands with her one-month-old baby, Scotland’s Kirsty Law won the title with a throw of 54.23m. Amy Holder secured silver with 54.00m and Shadine Duquemin got bronze with 53.23m.

The women’s 800m had looked set to be one of the most competitive events of the championships in terms of depth and the heats were won by European and Commonwealth medallist Lynsey Sharp in 2:04.05, as she eased down at the end of the race, plus Hannah Segrave in 2:03.83, Alex Bell in 2:02.81 and European indoor champion Shelayna Oskan-Clarke as she came through to pip Adelle Tracey, 2:02.28 to 2:02.39.

World 4x400m medallist Zoey Clark went quickest in the 400m heats, running 52.18 in heat two ahead of European under-23 relay medallist Yasmin Liverpool with 52.49 and multiple world relay medallist Perri Shakes-Drayton in 53.13, as they both also booked their places in the final thanks to their times.

European bronze medallist Meghan Beesley was among the 400m hurdles heats winners as she clocked 57.05. Jessica Turner (56.49), Lauren Thompson (57.76) and Jessie Knight (57.44) also won their heats, while European indoor relay medallist Lina Nielsen was disqualified but then reinstated, securing her spot in the final thanks to her runner-up time of 58.22 behind Thompson in heat two.

Welsh Commonwealth Games hurdler Caryl Granville looked in a strong position ahead of the final hurdle in heat three but she pulled up and did not finish.

» See the August 29 edition of AW magazine for full coverage