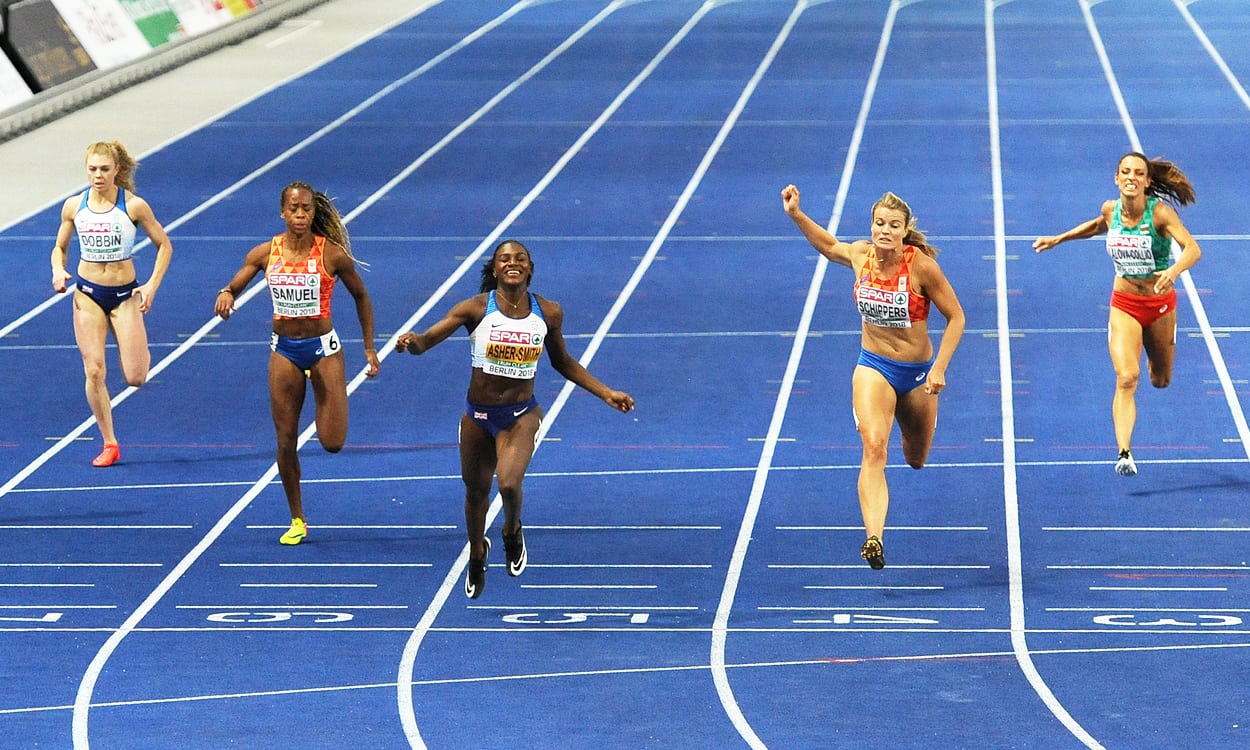 Dina Asher-Smith was electric in the 100m but she was probably even better in the 200m as she completed a superb sprint double at the European Championships in Berlin.

The conditions were a lot cooler than in the 100m final on Tuesday night and not as perfect for fast times but it did not stop the Blackheath and Bromley Harrier from showing she is now a world beater in both sprints and ready to take on anyone on the planet.

The 100m champion got a good reaction time of 0.167 and was quickly past Jamile Samuel on her outside off the bend. She hit the straight a metre and a half clear.

In recent 200m races, when the Briton has run the first 100m too fast, she has not been able to hold the pace. But this time she stayed relaxed and her opponents, including double world champion Dafne Schippers, could make little impression on her.

She was well over two metres clear at the finish and the time was a sensational world lead of 21.89, which took 0.18 off her own British record and moved her into the European all-time top 10.

“I’m still in a bit of a haze,” she said after completing her lap of honour in the Olympic Stadium.

“I was thinking that out there I had a double world champion inside me (Schippers), so it was ‘maintain your form, relax’ and all the other tips my coach gives me, but ultimately you’ve got to run like a bat out of hell. Honestly, I had the fear of god inside me.

“The race was over in a blur. I remember crossing the line and it was like a mixture of happiness and relief that I got it.

“I didn’t have a time in my head coming into the 200m because I’d done the 100m already and didn’t know how tired I’d be. It’s kind of cold today so you never know how that’s going to affect the times, and ultimately once I’d done the 100m I just wanted to win. I haven’t seen my coach yet, but I know this will have meant a lot to him as we’ve been working on this for pretty much the whole winter.”

SHE'S DONE IT!@dinaashersmith wins gold in the 200m with the fastest time in the world this year!

Behind her, Schippers again showed what a fantastic competitor she is and though she could make no impression on the Briton, a big season’s best of 22.17 meant she looked happy and seemed delighted for her UK rival.

Netherlands made it two of the top three with Samuel third, equalling her PB of 22.37 just ahead of Switzerland’s Mujinga Kambundji’s 22.45.

Williams, who was fourth in 2014, finished just ahead of her team-mate Beth Dobbin, who could not have foreseen at the start of the season she would be in a European final and was content with seventh in her biggest race to date.

There is no doubt where the current strength of women’s 400m running is in Europe as Poland, with an individual gold and a world 4x400m bronze, won the 4x400m with plenty in hand to go top of the medal table after the day’s final event.

They were anchored by individual 400m champion Justyna Swiety-Ersetic, who ran her usual well-judged anchor leg. The Polish team also used Iga Baumgart-Witan, who had finished fifth in the individual race.

Zoey Clark got the British team off to a good start and Anyika Onuora kept them in the hunt but appeared to tie up a little in the last 30 metres. All Amy Allcock could do was keep the team close within the top five, which she did with a controlled sensible effort.

Some had probably expected to see 400m finalist Laviai Nielsen on the final leg but the organisers’ bizarre (some would say ludicrous) decision to run the 4x400m final not long after the individual 400m and 200m finals meant it was Eilidh Doyle on the last leg.

Doyle had had a nightmare run the day before in the 400m hurdles and clearly was not at her very fittest but she too ran a superb well-judged anchor leg, moving up to third along the back straight and then holding her form well to ensure Britain won the bronze in 3:27.40 behind Poland (3:26.59) and France (3:27.17).

Belgium finished a few metres back in fourth in 3:27.69 but did have the consolation of a national record.

Doyle said: “I was just trying to hang on. This is the best way to come back after I had the disappointment of my individual – to get the opportunity to go out and redeem yourself on the track.

“I just knew we were capable of getting a medal but I knew it would be tough. There were four or five teams there who could potentially win. I spoke to our relay coach last night and I said if you want, I just want the option of going out there again and to have another shot. It’s the best type of cure after a disappointment to be able to pick yourself up again. To win a medal is a nice end to the Champs for me!”

In the individual 400m, Swiety-Ersetic had never previously broken 51 seconds and was only sixth in 2016, but using her usual super-fast finishing drive she flew down the straight and caught a desperate Maria Belibasaki on the line.

The Pole, who anchored her team to world medals in London, won in a European lead of 50.41.

Belibasaki, who has previously been a 200m runner, also broke 51 for the first time with a Greek record 50.45, while Lisanne de Witte finished strongly and her 50.77 was a Dutch record.

At 300m, Nielsen, who was fastest in the semi-finals, was in a clear medal position but she had gone faster than in her semi and was not able to hold her speed quite so well.

She still finished a superb fourth, which no one would have predicted pre-championships, and her 51.21 equalled her semi-final time.

Britain also won a bronze in the long jump.

Gold went to Malaika Mihambo, who was fourth in the Rio Olympics and third in the last Europeans. She started slowly with a pair of 6.36m jumps but then took the lead with a 6.75m third-round jump.

Britain’s 2015 world medallist Shara Proctor, who had an early lead with her opening round 6.58m leap, came close to the German with a 6.69m fourth-round jump.

The 2016 runner-up Jazmin Sawyers moved up to fourth, just a centimetre off a medal with a 6.66m penultimate jump, and at this stage just nine centimetres covered the top four.

In the final round, Sawyers improved to 6.67m to go into third on countback but Ukraine’s Maryna Bekh’s response to losing her bronze was to snatch it back with a 6.73m – which left her just two centimetres down on the gold.

With the overall penultimate jump of the competition, Proctor got a fine leap before an agonising wait until it was announced as 6.70m – an improvement but still in third.

She said: “That definitely made it worth it for me – the fact that I had to battle a bunch of other talented women; the wind, the atmosphere – they were cheering for the Germans of course so I had to use that energy to propel me.

“I’m not happy with a bronze. I wanted a gold, but you know what? It’s better to have that than to not – so I am satisfied.”

With her last jump, Mihambo, already assured of gold, finished with a 6.73m and the German crowd roared their approval.

Britain finished with two in the top four but national champion and world-leader Lorraine Ugen could only finish ninth.

She had a big no jump to start and then a solid 6.45m which moved her into the top eight until Mihambo’s third jump.

Only needing 6.47m to gain another three jumps, Ugen again went for it and a foul meant her competition was over.

Defending champion and most people’s favourite, Ivana Spanovic, did not compete due to injury.

It was no surprise that Sandra Perkovic won her fifth discus title but it was how bad her competition was with one exception which came as a shock.

Her opening throw hit the cage and landed about three metres away and her next two throws of 59.09m and 59.97m hardly reflected the ability of the double world and Olympic champion.

At this stage she was third behind Nadine Müller’s 63.00m and Claudine Vita’s 61.25m and the German crowd – already excited with the long jump and men’s high jump – were beginning to think a shock was about to unfold.

Perkovic fouled in the fourth round but finally got a decent throw in in the fifth and with 67.62m the contest was over.

It was just as well she got one good throw in as in the final round Shanice Craft improved to 62.46m and Vita to 61.25m and it would have been a German clean-sweep but for that one throw.

The Croatian said: “I am relieved. I am winning my titles always dramatically. I was thinking about my mum watching me on TV and how nervous she must be seeing me not throwing well, then I managed to improve and so I smiled to the camera.

“Then I saw she was in the crowd and had come to surprise me.”

Only the top four bettered 60 metres.

Jade Lally, who had been affected by recent back problems, had a solid series and her 57.33m second-round throw placed her 11th.