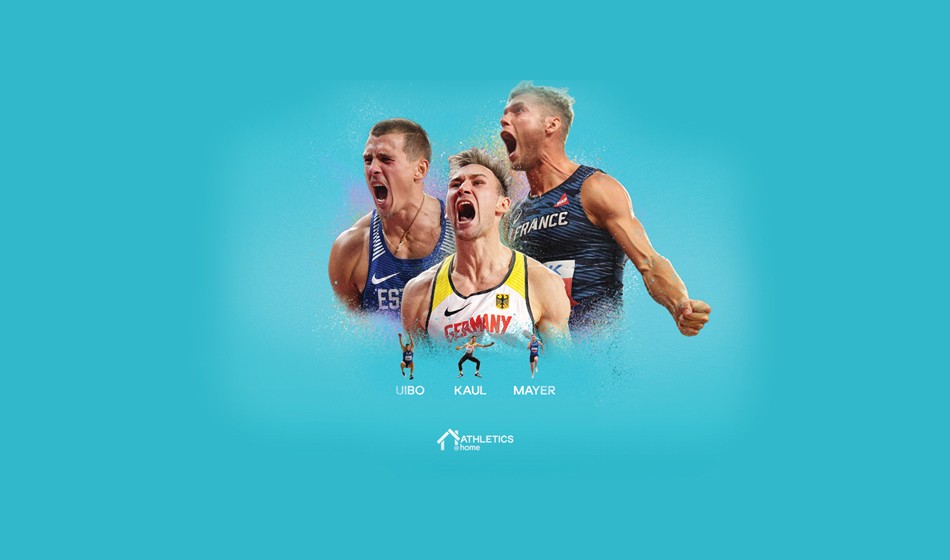 The world’s top three ranked decathletes – Kevin Mayer, Niklas Kaul and Maicel Uibo – will return to competition on Sunday (June 7) when they clash in a live-streamed virtual triathlon competition.

The triathlon will conclude with a shuttle run in which two cones are placed 20 metres apart, with the athletes collecting points for each completed back and forth shuttle over the course of five minutes.

The points scored in each event will be tallied to crown the overall winner.

Weather permitting, the hour-long event will start at 5pm CEST (4pm UK) and will be broadcast via a World Athletics live stream, which will be available to watch here on Sunday.

It is the third event in the Ultimate Garden Clash series, following men’s and women’s pole vault competitions won by Renaud Lavillenie and Mondo Duplantis in a tie and Katerina Stefanidi.

“The format will be a little demanding, because we are not used to the (endurance aspect) of it,” said Mayer.

“We are ‘sprinters’, endurance is harder for us.

“I don’t know how it is going to be, but I think Niklas will be good at that and we’ll have to fight against him.”

Like in a decathlon, Mayer believes that the last event, the shuttle run, will be the toughest.

“I think the three of us know that the last part will be the hardest. I’ve not done this particular ‘discipline’ in my life, but I know it’s going to be hard,” he said.

“With the marks at 12 metres and 4 metres in the shot put and pole vault, I think these are going to be easier for me.”

Kaul said: “It’s really good because it’s something different than just training. I’m really looking forward to compete with the other two guys again even if we are not in the same country. It’s going to be a lot of fun.

“I don’t think I am the man to beat,” he added. “The pole vault is going to be hard, I’ve only had one pole vault session in the last three months, so we’ll see what happens there. I think the last event is going to be hard for all of us, because usually we run a 1500m which is four to five minutes, evenly paced, just running, but this time we have to stop and go again. So I think it will be harder than a 1500m.”

Uibo is also looking forward to a new challenge.

“I guess I’m a bit of an underdog, so I’ll just have to put the target on their backs and chase them down,” he said.

“I guess we’re doing something similar to our ‘everyday jobs’ and run, jump and throw, but this has got a bit of a twist, so it’s interesting for all of us trying to get as many reps in in 10 (and 5) minutes as we can and I really think it will be fun. I don’t really know what to expect from it, but just like Niklas, I haven’t really vaulted, I haven’t thrown the shot in the last three months, so it will be really interesting to see.”

World Athletics president Sebastian Coe said: “I’m excited to see what our best decathletes bring to the table because the pole vaulters really put on a show.

“I love how creative our athletes have been in coming up with new competition formats that we can stage safely and broadcast to our fans even while adhering to the many public health restrictions in place around the world.

“We are starting to see some countries taking cautious steps back into competition, while abiding by local social distancing measures, and that gives us hope that we can return to more normal meetings in August, but we are also mindful that different countries are at different stages of the pandemic and athletes in some countries will not be able to compete for some time. Events like the Ultimate Garden Clash show what can be done on a small budget with a little bit of ingenuity. I would like to thank the athletes and our staff for their efforts in making this happen.”

It has been one week since UK U23 half-marathon record-holder @JakeSmith_run stormed to a 28:00.5 10,000m time trial. He spoke with @JmWhittington about that run, records, lockdown training, World Half hopes and more ➡️ https://t.co/E4Sjsy9elg @Met_athletics @TeamThie