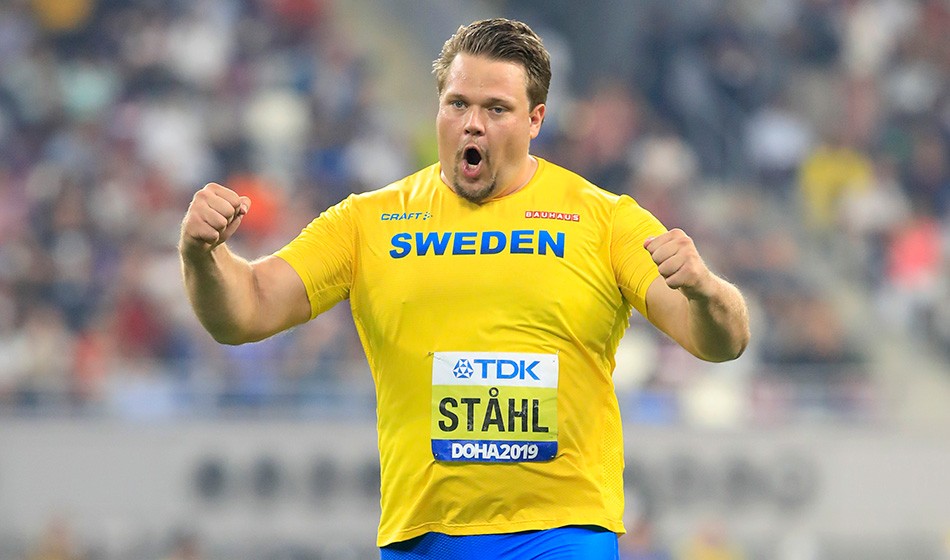 Global highlights from the past week in athletics

World champion Daniel Stahl launched the discus out to a world-leading 71.37m on home soil for his second best ever mark and the 14th best ever in the world.

His third-round attempt was initially judged to be a foul before the mark was reinstated. He also threw 68.38m in the first round.

Kalle Berglund broke the Swedish record in the 2000m, running 4:59.71 ahead of his compatriot Andreas Almgren (5:00.23) as Britain’s Neil Gourley placed third in 5:00.73 which puts him second on the Scottish all-time list.

Angelica Bengtsson won the pole vault with a clearance of 4.64m, while Leonardo Fabbri won the shot put with 21.57m.

Marc Scott stormed to a British record of 13:20 to just miss the European best. Alex Yee was also under the previous UK record time with 13:26.

What an evening of racing at the @podium5k! @_MarcScott broke the British record with 13:20, while @beth_potter ran 15:24 to go to fifth on the UK all-time list and there were many other top results too. Click the link to read more! ➡️ https://t.co/E8OC36MxHR

Yee’s fellow triathlete Beth Potter was also in impressive form as she won the elite women’s race in 15:24 to move to fifth on the UK all-time list.

Shanieka Ricketts won the triple jump with a leap of 14.21m, while Fedrick Dacres claimed discus victory with 64.45m.

Simon Ehammer improved his PB by more than 200 points to win the decathlon title with a world-leading score of 8231 points.

Annik Kalin retained her heptathlon title with a score of 6167 points.

Sondre Nordstad Moen went further than the European record distance of 21,131m for one hour on the track, improving on Jos Hermens’ 20,944m from 1976. The mark may not be ratified as a record as there were later queries on the shoes he was wearing, following World Athletics’ recent footwear rules update.

The 2017 world champion Johannes Vetter won the javelin with 87.36m, while world champion Malaika Mihambo won the long jump with 6.71m (-1.2m/s) as she leapt off a shortened approach.

Michal Haratyk won the men’s shot put with 21.45m to Konrad Bukowiecki’s 20.36m, while Piotr Malachowski won the discus with a throw of 64.87m.

Lawrence Okoye continued his comeback with 64.85m for the longest discus throw by a British athlete in Britain since 2013.