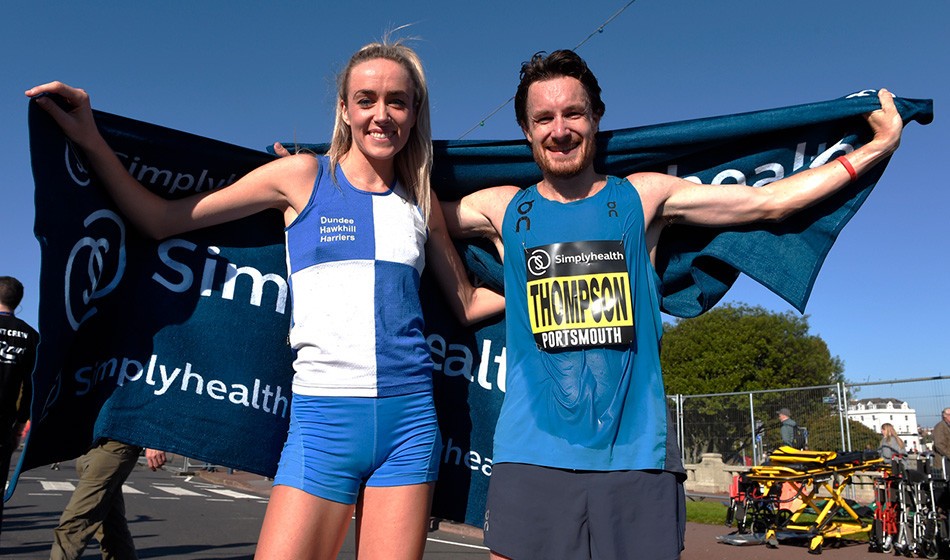 Chris Thompson raced to an unprecedented hat-trick, while Eilish McColgan claimed a debut win at the Simplyhealth Great South Run on Sunday.

In unseasonably warm and sunny conditions, Thompson proved his preparations for next month’s TCS New York City Marathon are well on track as he ran his fastest ever 10-mile race despite being in heavy marathon training.

The 37-year-old clocked 46:56 to improve on his previous best of 47:23 set when winning the same event in 2016 and become the first athlete to win the race three consecutive times.

Andy Vernon had also been racing on tired legs having claimed a half-marathon win in Manchester the weekend before but still ran a PB of 47:29 for second, while late entry Petros Surafel was third in a 48:05 lifetime best.

Thompson and Vernon had been joined by Libyan marathoner Mohamed Hrezi through three miles before the British pair pushed ahead and were clear together through five miles in 22:49.

Thompson kicked again with a couple of miles to go and without the usual windy conditions to contend with on the final two-mile seafront stretch he moved further away from Vernon to cross the line over half-a-minute clear.

Behind them another half-a-minute back, Surafel had moved up for third in his first race since June after injury.

“I’ve got to recover now,” added the 2010 European 10,000m silver medallist and recent Great Scottish Run winner. “Andy made it tough. I wanted it to be quick and he did push it and I was quite surprised by the splits but I was also equally surprised that once I got to seven miles, the strength started to come through and I just rolled with it.” 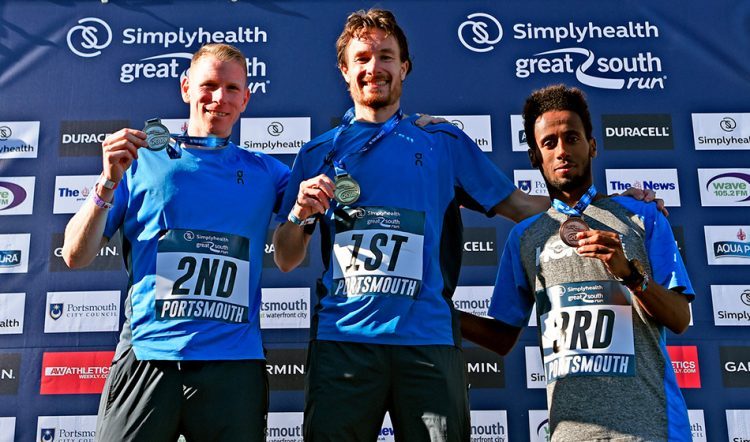 Thompson has been battling injury problems over the past few years and his latest win represents another big step on the road to what he hopes will be a marathon “rebirth” in New York.

“I can’t emphasise how happy I am, but at the same time – New York. I’ve got to turn my attention to that now,” he said. “This is all great but I will be miserable for months if I don’t get two weeks’ time right.”

Vernon also has his eye on a marathon but will likely look to make his debut over 26.2 miles next spring.

“I tried to break him and in the end I broke myself,” the Fareham-born athlete said on his battle with his Aldershot, Farnham & District club-mate. “It just shows what marathon training does to you. It just makes you so strong and he was able to kick on in the last couple of miles and I actually slowed down a little bit.”

While Thompson made event history as a three-time winner, McColgan was racing the event – and indeed any distance over 10km – for the first time.

Before the race the 27-year-old had admitted that she was pushing herself out of her comfort zone and had no expectations of what she might be able to achieve, but with a marathon in her sights at some point in her future the Scot was keen to take the next step.

It proved to be a successful one as she strode to victory in 54:43 ahead of Steph Twell and reigning champion Gemma Steel. 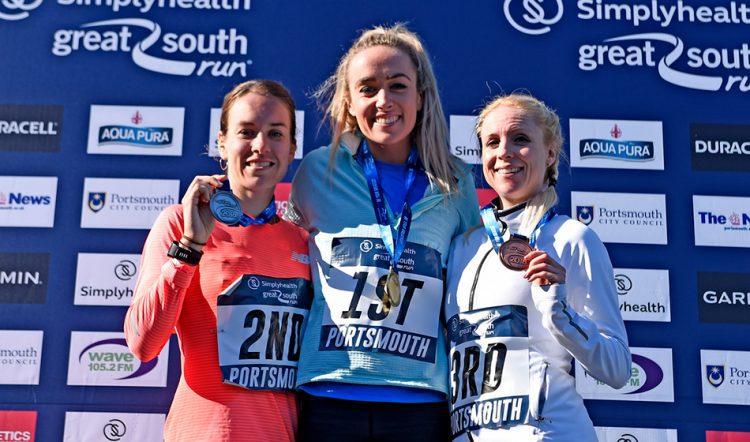 Twell had been to the fore and looked strong as she continued to push the pace through six miles. But after creating a gap on her rivals, McColgan started to reel her in and as they turned back along the seafront for the final couple of miles the two Scottish runners were side-by-side.

Following in the footsteps of her mum and coach Liz, who is a two-time winner having secured success in 1995 and 1997, McColgan was still feeling good in the closing stages and strode away to add her own name to the event’s roll of honour.

“I’m so happy,” she said. “That was such a strange experience. I didn’t know what to expect and to be honest that was probably what helped in a way. My mum said to me: ‘Don’t look at your watch, don’t look at times, just be competitive and race the other girls’, and that’s what I did today.

“I got to eight miles and when I caught back up with Steph I thought I could slow it down and try and overtake on the last little bit or just go for it, and I felt really good.

“It was definitely a much more pleasant experience than I suppose I was expecting!”

Twell has had a busy couple of months as she got married to fellow runner Joseph Morwood and then raced at the Commonwealth Half Marathon Championships in Cardiff before going on her honeymoon, from which she returned just ahead of the Great South Run.

She is also eyeing a marathon debut and will now sit down with her coach Geoff Wightman to decide when that might be, though she added that stepping up later this year is not out of the question.

“I’m a bit gutted but obviously I’ve had a lot going on,” she said on her runner-up finish in 55:16. “It was a good performance, a proper race. I felt good but maybe I went through the gears a little bit too quickly. I thought that would be a winning tactic!

“I’ve just been on honeymoon but I was still thinking about my training and I was still exploring trails and for me that was a good way to enjoy it. Maybe that was one step too far right before a big race. But I’m happy with that. Not really, really happy, but I’ve got a bigger picture to look at.”

The event incorporated the England Athletics 10-mile Championships and the women’s title was won by Steel after her 56:56 for third place overall. Wales’ Clara Evans was fourth overall in 57:44 and so silver in the England Championships was secured by Calli Thackery in 58:48, while Laura Brenton bagged bronze in 59:58.

Top three in the men’s race also claimed the England Championships medals. In the overall standings, Hrezi placed fourth in 48:32, ahead of Ireland’s Kevin Seaward in 48:41.

» See the October 25 edition of AW magazine for further coverage