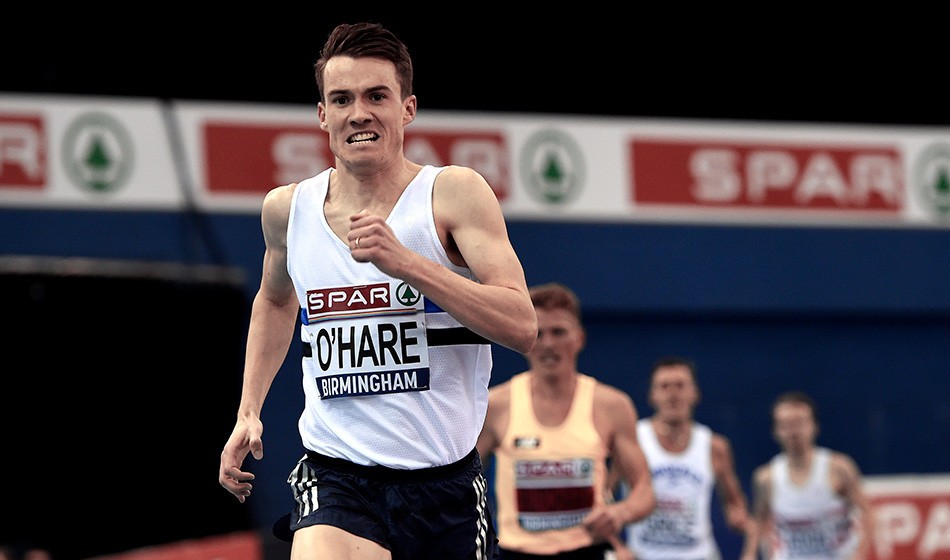 Chris O’Hare showed that he is taking a step up in distance firmly in his stride by winning the British indoor 3000m title on day two of the championships in Birmingham.

The top two made sure of their European places, while the Central AC man is certain receive a discretionary spot when the British team is selected next weekend.

It was another Scot, Adam Craig, who had made the running before Butchart took charge for much of the race, though the lead changed hands between the top three.

O’Hare, using the longer distance to help sharpen his 1500m skills, made what proved to be the decisive move with three laps to go, heading to the front as Butchart began to fade. The closing 600m was covered in 1:29 as the Edinburgh AC man crossed the line first, with Grice just pipping Butchart on the line.

“Butchy’s fitter than I am, I would say, but it’s an on the day thing,” said O’Hare, with both men being based in the America and coached by Terrence Mahon. “He did the hard part and I had the easier of the two jobs.

“At three laps to go I could feel him wavering, I looked back and could see people closing in on us so I thought the best thing for us both was for me to take it and keep that gap so he didn’t need to worry about outkicking other people.”

Grice said: “My aim for today was to get the time and finish in the top three so I could be on the podium and I’ve managed that so it’s job done from my perspective. I’d rather be going in the 1500m but I cannot complain, I’m still going to the European Indoor Champs.” 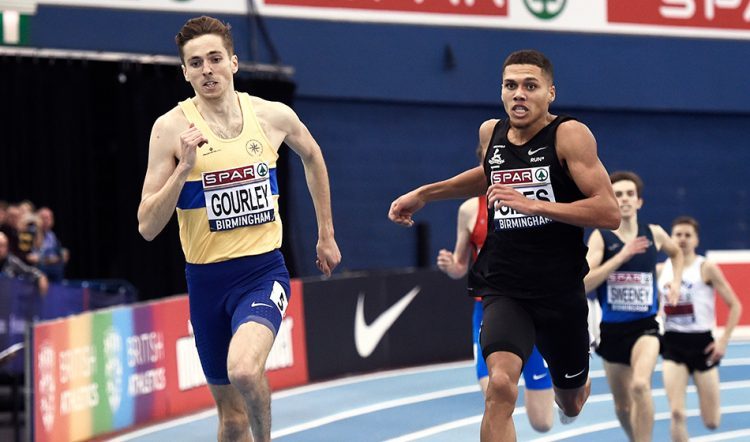 The times were slower than the European qualifying standard of 3:42 but, with Gourley having already run inside the mark last summer, his victory booked the Giffnock North athlete’s ticket to Glasgow.

Gourley and Giles led out a slow, tactical start before Robbie Fitzgibbon moved into the lead and began to increase the gap, going through 2:33.53 for 1000m.

However, it was Giles and Gourley who took the bell before the battle for the line.

“I’m pleased with that,” said Gourley. “I can’t get complacent now because the big challenge comes in two weeks in my home city at the Europeans. I’m beyond motivated to do well there. To do that against the likes of Elliot is something really special because he has a great kick.

“I’m shooting for a medal in Glasgow. I’ll make no secret about that.”

There was some controversy in the 800m, with the result not being confirmed until long after the race following an appeal to Jamie Webb’s disqualification.

The Liverpool Harrier looked to have stormed to an impressive victory but an incident where he made contact with Guy Learmonth proved costly. Instead, the win was awarded to Cardiff’s Joseph Reid, who clocked 1:48.41, with Learmonth moved up to second in 1:48.51. Spencer Thomas was third in 1:49.73.

There was drama in the 400m, too, but that was all due to the nature of the race, with Guernsey’s Cameron Chalmers winning his first British title in 46.26 to hold off the challenge of Cardiff’s Owen Smith (46.37), both men running personal bests which put them inside the European qualifying mark of 46.90. Alex Haydock-Wilson was third in 47.29. 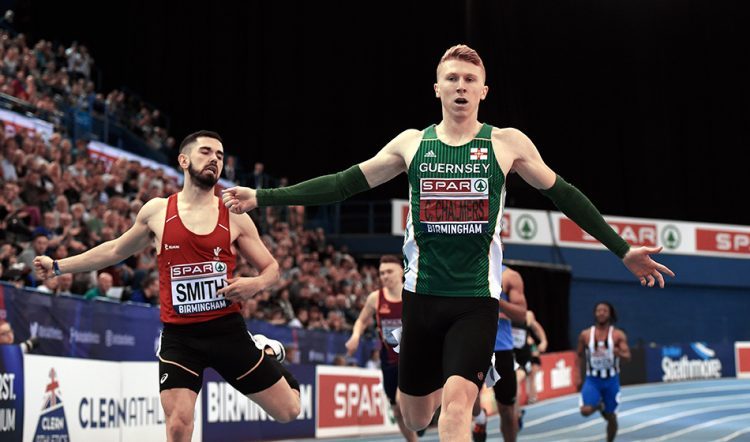 “I just wanted to win and to run that fast and go through (the first lap) in 21.6 – that’s really fast – so I’m really happy,” said Chalmers. “It was a massive indoor PB so I’m happy.”

David King was not pleased with his run of 7.78 which gave him the 60m hurdles title but, with the Glasgow qualifying standard (7.65) previously secured, was content to make sure of his place on the British team.

“It was very messy,” said King, who finished ahead Cameron Fillery’s 7.80 and a 7.85 from Khai Riley-la Borde. “I’ve been trying to work on a few things and they didn’t quite pay off in the final buy luckily I managed to hold it together.

“I feel like I need to be taking more risks in my racing.”

The 200m is no longer contested at the European Championships but the British title was fiercely contested nonetheless, Sale’s Connor Wood taking gold in a personal best of 20.94, marginally ahead of Woodford athlete Chris Stone (20.96), who fell across the line as he strained every sinew. Harlow’s Shemar Boldizsar was third in 21.13.

Tom Bosworth secured his fifth indoor British title when taking a commanding win in the 5000m walk with a time of 19:22.55.

The Commonwealth Games 50km silver medallist went to the front right from the off but came under pressure from Callum Wilkinson.

The younger athlete was disqualified just after he had taken the lead with around 1600m to go, however, leaving Bosworth with an uncontested path to the line.

Commonwealth bronze medallist Luke Cutts entered the competition with the bar at 5.15m, but failed to vault that mark.

Myers, who has struggled with injury, said: “Once I got my confidence back everything started to flow. I would rate my performance at a seven today, it’s great with what has been going on, however it was a very messy performance. I have not jumped for a while so it is still there but need to tidy it up.”

There were indoor personal bests for the top three in the long jump, which was won by Feron Sayers thanks to his fifth-round leap of 7.72m, the Shaftesbury athlete finishing four centimetres ahead of Bournemouth’s James Lelliott. Sale athlete Reynold Banigo was just a centimetre back with a leap of 6.67m.

Sayers’ jump was short of the European qualifying standard 7.95m, though he leapt 8.05m outdoors in Geneva last June, within the qualifying window.

“Up next, fingers crossed it’s the Indoor Grand Prix hopefully, but if not it’ll be the European Championships and I cannot wait to get going in that,” said Sayers.

A women’s events report is here.