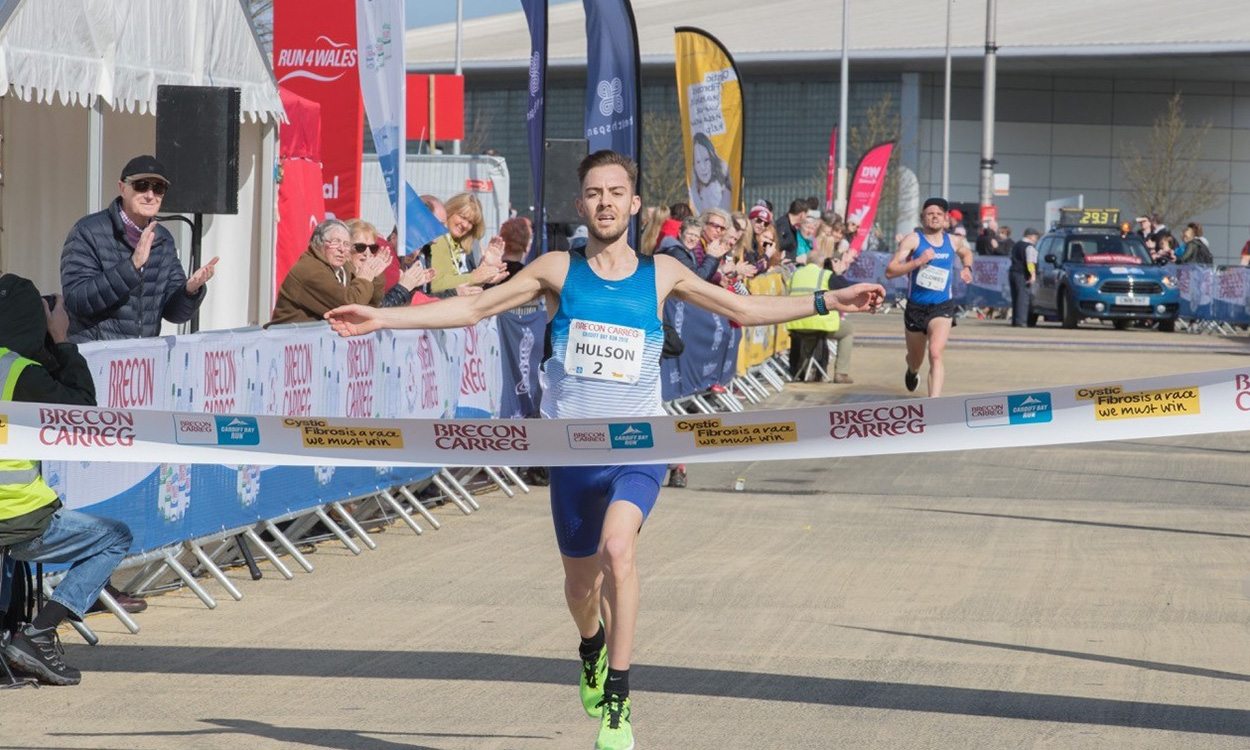 The race will follow the ABP Newport Wales Marathon which will welcome 4000 runners to compete over the traditional 26.2-mile distance in Wales’ third city.

Both races will start and finish in Newport City Centre and take in picturesque loops of the Gwent levels, a site of special scientific interest.

Hulson will be chasing another victory on the roads to add to his 2018 race titles from Chester, Telford and most recently at the Brecon Carreg Cardiff Bay Run (pictured). The Liverpool Harrier was also fastest on leg three at the ERRA National Road Relay Championships in Sutton Park two weeks ago.

Steven Connor was the British Universities cross country champion in 2013 and is now chasing times on the road. The Aldershot, Farnham and District athlete will hope to better his previous mark of 30:47.

The top local athletes include Cardiff AAC’s Carwyn Jones, Swansea Harriers Morgan Davies and Phil Matthews and Newport man Abed Teweldebrhan. The 22-year-old from Eritrea has been steadily improving in recent years and is edging ever closer to the illusive 30 minute barrier. Bristol & West AC duo Owain Jones and Luke Evans should also be in the mix.

The women’s contest over 10km will feature Rachel Felton, who boasts a hat-trick of Cardiff 10k victories. The Shaftesbury Barnet Harrier is also a regular at the Cardiff Half Marathon and competed at the IAAF World Half Marathon Championships in the city two years ago.

Rebecca Robinson of Kendal AC and Bristol & West’s Kate Maltby both have fine pedigree as mountain runners and impressive road times for 10km at 33:09 for Robinson and 33:29 for Maltby. The trio will be joined by 2014 British half-marathon champion Emma Stepto, who is the fastest on paper but with her best mark of 33:02 set four years ago.

Matthew Edmonds of MMRT and Jordan Frapwell of Stroud AC will head the men’s fields for the marathon. Edmonds is a Newport-based former professional boxer with a marathon best of 2:33:30. Frapwell will debut over the distance but will be perhaps the most likely to challenge local man Edmonds.

Natasha Cockram hails from the same East Wales based club as Edmonds and finished eighth in her only previous outing over the distance at the SSE Airtricity Dublin Marathon in 2017. Cockram will now look to beat her 2:49:37 clocking from the Irish capital.

Andrea Rowlands of Eryri Harriers won the Snowdonia Marathon in 2014 and is a sub-three-hour competitor who will hope to challenge Cockram.