Carolin Schafer leads heptathlon after day one in London 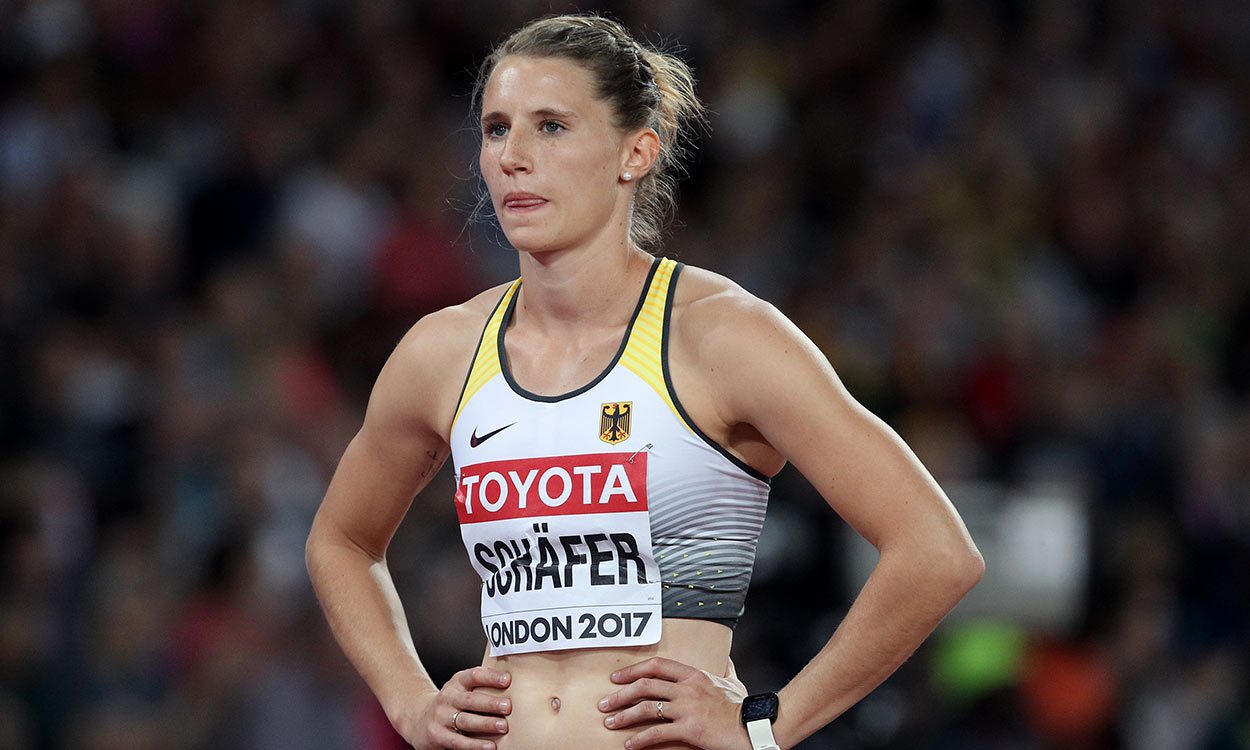 Nafissatou Thiam may not be leading at the end of day one, but she looks well placed to add a world women’s heptathlon title to the Olympic crown she already holds.

It is Germany’s Carolin Schafer who currently sits in first place on 4036 points after four events, with the Belgian on 4016 and Cuba’s Yorgelis Rodriguez (3905) third. Katarina Johnson-Thompson sits fourth on 3838 but it could have been so much better for the Briton.

The competition got under way in the morning with the 100m hurdles but Thiam did not have the best of starts, opening her campaign 11th quickest overall in 13.54. Schafer was third-quickest in 13.09 and Johnson-Thompson just outside her PB with the sixth fastest time of 13.33.

It was in the high jump, however, where some potentially decisive moves were made.

Thiam led the way with 1.95m, failing to clear her personal best height of 1.98m, while Rodriguez improved the Cuban record by a stunning 8cm after also clearing 1.95m.

Johnson-Thompson’s medal hopes, however, suffered a very serious blow when she failed three attempts at 1.86m. Her dejection was all too clear.

The evening’s proceedings began with the shot and Thiam led the way again with a throw of 15.17m ahead of American Sharon-Day Monroe (15.14m). Schafer threw fourth-furthest with 14.84m while Johnson-Thompson produced 12.47m.

In the final event of the day, Johnson-Thompson clawed some ground back by finishing fastest over 200m in 22.86, Schafer moving into the overall lead after coming second fastest in 23:58 and Thiam 14th fastest in 24:57.

While she might not be quite showing the imperious form that took her to third on the all-time list with a winning total of 7013 in Gotzis earlier this year, Thiam’s strength in the javelin over Schafer looks likely to prove critical.

“It was a good day,” said the 22-year-old. “I did some middle performances in the hurdles and the shot put but I don’t think I did any mistakes. It was pretty solid all the way through.”

Meanwhile, there were mixed fortunes for the British contingent involved in the 1500m semi-finals as two of the four women in contention progressed.

Laura Muir made sure of her place in Monday’s final. In what was an incredibly strong field, the British record holder and indoor European champion looked impressive as she followed Olympic champion Faith Kipyegong (4:03.54) closely home in 4:03.64, with Caster Semenya third.

“I’m through to the final so I’m really happy,” said Muir, who helped team-mate Jess Judd from the track after the efforts of leading out the field had taken their toll. Judd faded to finish 10th.

Muir added: “That was really strong, that could have easily been a final. I was boxed in a bit, but I didn’t panic, I was running on the inside, I wasn’t running wide or anything.

“I kept glancing up at the screen to check the gap (behind) because I didn’t want to waste too much energy but at the same time I know the likes of Semenya and Dibaba were behind me as well and the Polish athlete Angelika Cichocka, all very strong sprinters, so I just thought I want to keep out of harm’s way and have a little bit up my sleeve if they come running past.”

Muir will be joined in the final by Laura Weightman after she finished fourth in a semi-final won by Holland’s Sifan Hassan in 4:03.77.

“I knew that race was going to be incredibly tough and that to make the final I would have to run the race of my life and I think I might have just done that there,” beamed Weightman. Britain’s Sarah McDonald was ninth.