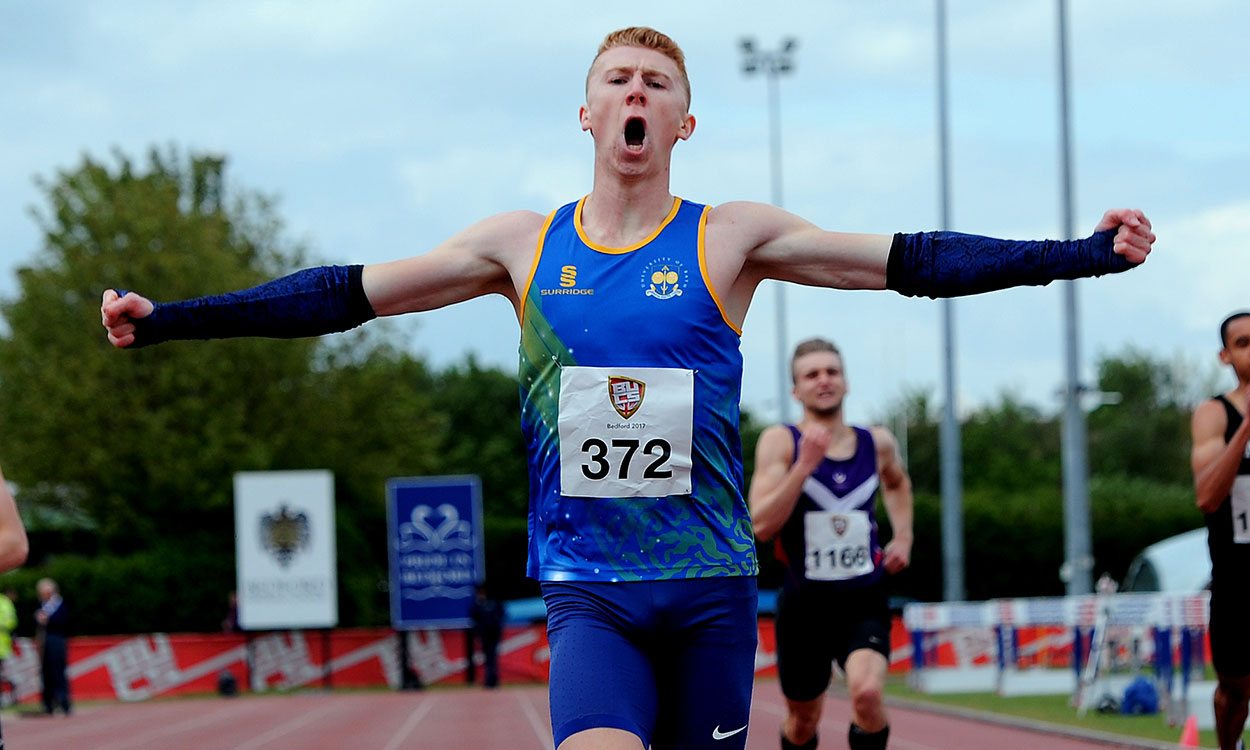 A 17-year-old championship record fell on the track and Loughborough took the overall team ranking award on the third and final day of the BUCS Outdoor Athletics Championships, Nick Sargent reports.

The women’s high jump final got the day’s proceedings underway on the field. Making a shock exit after failing three times with the bar at 1.75m was last year’s winner Pippa Rogan of Bath.

Also ongoing in the field was the women’s pole vault final. With the bar set at 3.80m, two athletes managed to clear it within three attempts: Clare Maurer (Imperial College) and Sarah Mckeever (Cardiff). Both were unable to clear the next height, and Maurer won on countback. Picking up the bronze medal, clearing a height of 3.70m, was Birmingham’s Livvy Connor.

A few hours later, Miller crossed the line in 13.60 to continue her form at the championships and clinch BUCS gold. Following Miller in silver medal position was Gloucestershire’s Mollie Courtney (13.76), and behind her in third was East London’s Sydney Griffin (13.81).

Jonathan Hopkins (Cardiff Metropolitan) won his third consecutive BUCS 3000m steeplechase title, setting a championship record with a time of 8.39.42. Hopkins’ time was under the qualification time for the World University Games being held in Taipei this summer.

In the eagerly anticipated men’s 400m final, Bath’s Cameron Chalmers broke the BUCS record, set 17 years previous, and won his fourth consecutive BUCS 400m title. His time of 45.71 also improved the Guernsey record. Loughborough’s Thomas Somers came in at 46.92 to win silver, and Bath’s Ben Claridge ensured two Team Bath student-athletes were on the podium as he came in third with a 47.23.

Chalmers said after the race: “I’ve been pretty nervous all weekend. I’ve been dying to open because I’ve been training so well: no niggles and dropping some really fast times in training. My goal for the season was sub-46 seconds.

Aberdeen’s Zoey Clark, who was dominant in the 400m heats, won a BUCS gold to add to her three previous BUCS bronze medals. Behind her time of 52.75 in silver medal position was Bath’s Olivia Caesar, while Aberdeen’s Kelsey Stewart took the third BUCS medal on offer.

In the field, meanwhile, Loughborough’s Kathryn Woodcock won the women’s discus event with a throw of 47.64m, and Cardiff Metropolitan’s Adele Nicoll set a BUCS record in the shot put with a throw of 16.25m as she won gold.

More Loughborough medals came with a one-two in the men’s ambulant long jump – Konstantinos Kamar picked up the gold and Ben Jones the silver. Shortly after, Montez Blair added to the Loughborough glory with gold in the men’s high jump final – his 2.15m clearance 0.09m higher than that of Birmingham’s Akin Conrad who won silver.

Loughborough’s Jessica Judd and Strathclyde’s Mhairi Hendry put on the race of the championships in the women’s 800m. The lead changed hands between the two student-athletes a number of times throughout the race, and with both athletes side-by-side in the home straight, Judd’s lean over the line saw her scoop BUCS gold in a time of 2:05.52s – 0.01s ahead of Hendry. 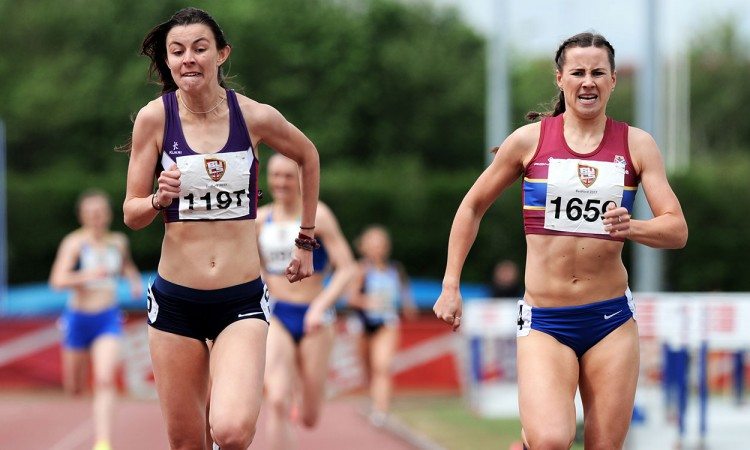 Judd added her second BUCS gold of the day in the 5000m event just an hour later with a time of 15:55.40, beating this year’s BUCS cross country champion Rebecca Murray (Brunel) who won the A race. Judd had been omitted from the A race as she was making her debut but was quickest overall. Sheffield’s Becky Rigby won bronze.

East London took the men’s 200m title too through Kyle Ennis, who retained his BUCS title for a second year in a time of 21.40. Six-hundreds of a second behind Ennis was Stirling’s Cameron Tindle who won silver, while Cardiff Metropolitan’s Thomas Williams came in at 21.58 to secure bronze.

Closing the meeting were the relay events. East London won the double with wins in the men’s and women’s 4x100m. Shortly after, Loughborough’s women took the 4x400m BUCS title, and Chalmers charged after East London’s front runner in the final leg of the 4x400m final to win another gold for Bath.