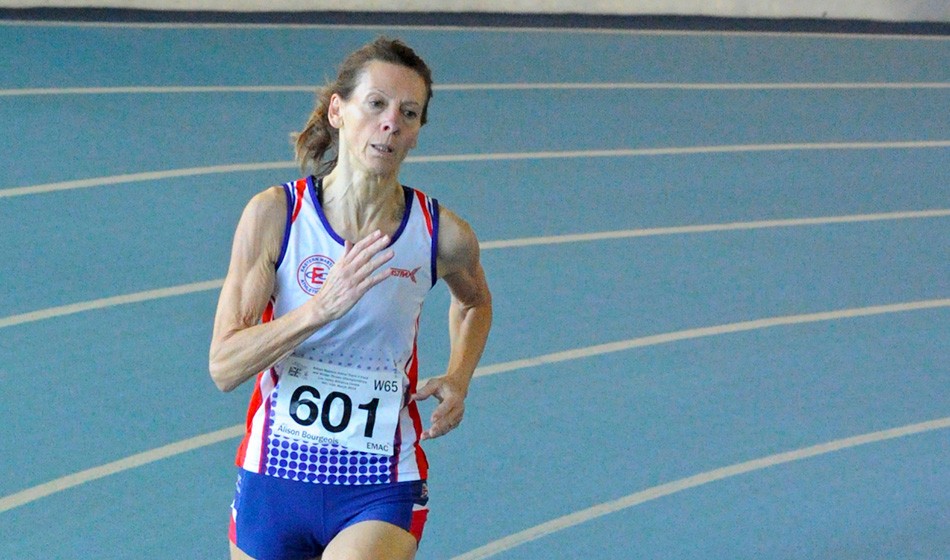 Britain enjoyed their most successful event of the World Masters Indoor Championships as they won nine golds on offer in the 1500m on Saturday.

In the morning session, when Britain won successive golds at M55, M50, M45 and M40, one American was heard saying the land of Coe, Ovett and Cram can still dominate the metric mile, at least in masters terms.

It was Shirley who set the ball rolling.

Up against his 800m conqueror Albert Walter of Germany, and with two silvers already in the bag, World Masters 5000m champion Shirley won by a second in 6:08.00 from Walter.

Bracken started the golden half-hour in the M55 race. Just as he had run away from the opposition in the 3000m, the North Easterner powered away to win by over two seconds in 4:24.43 from Canadian Paul Osland to ensure he is now world champion indoors and out.

While Bracken was coming from the longer distance victory, Symes was following up from 800m gold and he again proved too fast for the opposition over the closing laps as he too followed his win in Malaga last summer with victory in 4:17.49.

He was followed in by his team-mate and Spanish-based Dave Cowlishaw in 4:19.21 while Adrian Haines made it three Britons in the first five.

In contrast, Richardson had to settle for second in Malaga and was out of the medals in the 800m. But this time he ran a much better tactical race, forcing the pace from the gun and then accelerating on the last lap he won in a fast 4:05.18, a second ahead of Juan Jose Crespo Rincon of Spain.

Completing the glorious quartet of races was Thie.

The Welshman had dominated the M35s five years ago in Budapest and was now in a new age group, and focusing on just one event probably his biggest scare was almost missing the declaration the day before the heats and missing out on running entirely.

In the event itself, he had to take on the Spanish Armada who had six runners and they eventually provided three of the first four but Thie showed his past senior international and now top coach nous by winning in 4:07.33 by less than a second from 800m champion Antonio Juan Gil.

After a break for the hurdles the action then started with the women and they won a further four golds there.

Hornsey completed the middle-distance double with a comfortable win in the W75s in 8:04.42, six seconds up on Milena Hovorkova of the Czech Republic.

Bourgeois also won a 800m and 1500m double, and also with great ease. As she bowled along well in front to win in 5:55.65, everyone else played tactical.

3000m champion Ros Tabor was the first to sprint on her penultimate lap but such was her kick on the penultimate lap and the bell sounding for Bourgeois, her main rival, Ana Giuffra was confused and sprinted finishing she was second only for the bell to go and Tabor was second in 6:33.66 to win her third individual medal, having also been runner-up at 800m. Giuffra recovered to take the bronze.

W65 World Masters gold at 1500 for Alison Bourgeois in 5:55.65 with British 1-2 as Ros Tabor 2nd after lap confusion pic.twitter.com/LaldCdacPx

Elms had already won at 3000m and cross-country but was disappointed with her silver at 800m.

After a slow first lap, she pushed on strongly and at 1000m in 3:13, she was up on her world record schedule, but still not 100 per-cent after her virus and with 15 runners in the field and having to lap a number of them in lanes two or three, she decided to ease off completely though her 4:54.97 was still inside what was the record prior to a few months ago when she started her record spree.

Ten seconds back, Esther Pedrosa Carrette followed Elms home as she had in her other two victories while Britain took three of the first four places as Anne Howie (5:17.22) pipped Christine Anthony for third.

The final winner of British 1500m golds was the runner who aided Elms to a 3000m record in the British Masters.

Apart from the golds and lesser medals mentioned above, there were further medals.

While he was no match for Ireland’s Joe Gough, who completed a M65 middle distance double in 4:51.39, Kevin Archer picked up another medal with 4:53.68 for bronze.

In sixth place was Finland’s double 1980 Olympic medallist Kaarlo Maaninka who finished behind Miruts Yifter but ahead of Lasse Viren in Moscow.

Angela Copson already had four golds in the bag but again had to settle for second behind her 800m conqueror Sabra Harvey.

This time she ignored the American who went out well inside world record pace but slowed to win in 5:57.19, 10 seconds outside Copson’s mark. Copson took silver in 6:03.41.

In the W50s there was a cracking race between world champion Eva Trost of Germany and Anne Gilshinan of Ireland which Trost only won by 0.03 of a second.