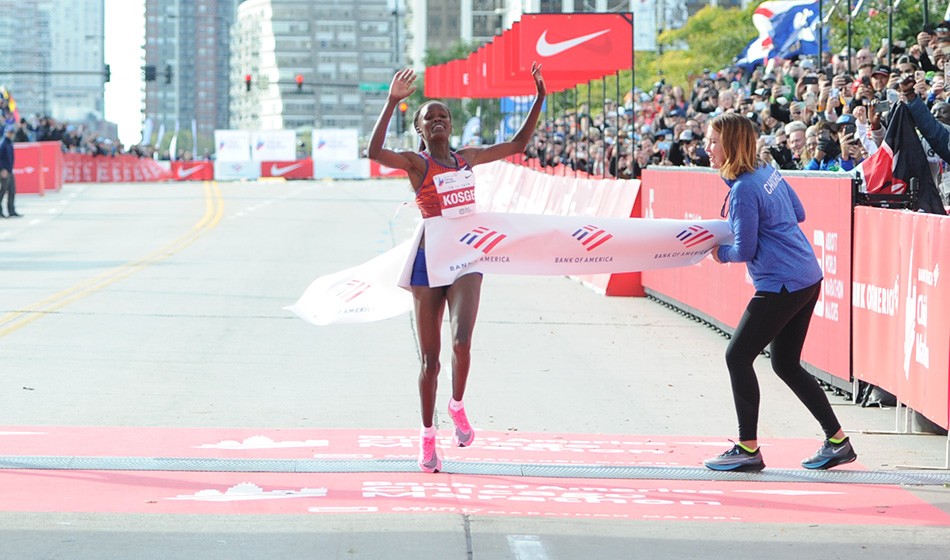 On a remarkable weekend of marathon running, Brigid Kosgei made more history by smashing the long-standing women’s world record with an incredible time of 2:14:04 in Chicago.

Paula Radcliffe’s outright women’s record of 2:15:25, recorded in London, had stood since 2003 and no athlete since had managed to come within a minute and a half of that but, assisted by male pacemakers as Radcliffe was 16 years ago, Kosgei took a significant chunk off the historic mark on a chilly and bright morning in Illinois.

It came just one day after her fellow Kenyan Eliud Kipchoge had broken the two-hour barrier for the marathon with 1:59:40 at the INEOS 1:59 Challenge time trial in Vienna and saw Kosgei smash a mark which had been seen as essentially the equivalent of a two-hour marathon for women.

It also came exactly 17 years after Radcliffe broke the world record for the first time with 2:17:18, also in Chicago, and Radcliffe was present to see her record fall on Sunday.

Wow. Brigid Kosgei's splits on her way to that remarkable 2:14:04 world record. Paula Radcliffe's 2:15:25 had stood since 2003 #ChicagoMarathon pic.twitter.com/DHpFH8MfI9

“When I saw how fast Brigid was running in the first part of the race, if she was able to hold that together she was always going to beat the time,” Radcliffe told broadcasters. “For me, 17 is my lucky number and it was 17 years ago exactly today that I set the first world record here in Chicago. That was a very special day for me today and it’s a special day for Brigid today.”

Kosgei’s fine form had been on show in the UK the month prior as she ran the fastest ever half-marathon by a woman with 64:28 at the Simplyhealth Great North Run, which is not eligible for record purposes due to the overall downhill point-to-point course.

Going through 40km in 2:07:11, she was on her own after her pacemakers peeled off and she held on to secure her spot at the front of the record book, finishing an incredible 6:47 ahead of runner-up Ababel Yeshaneh (2:20:51), with Yeshaneh’s fellow Ethiopian Gelete Burka a further four seconds back in third. 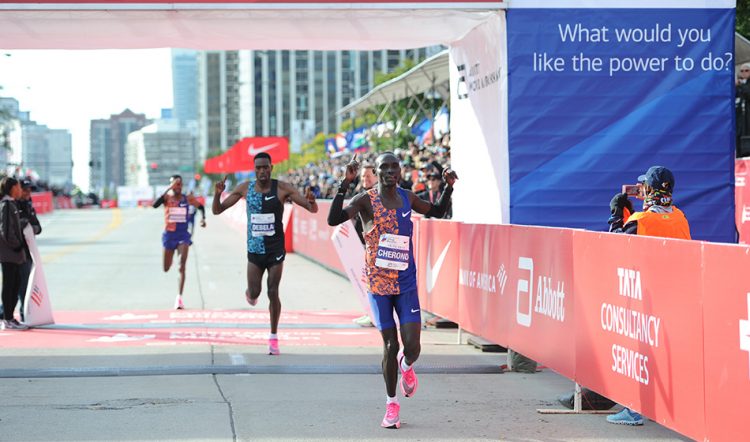 Over in a much closer men’s race, which was won by Lawrence Cherono, defending champion Farah had to settle for eighth in 2:09:58 as he found himself unable to stick with a lead group of six which went through 15km in 44:10 and halfway in 62:14.

Rupp was left behind and then the American dropped out of the race after 35km, while Belgium’s Abdi pushed on ahead.

As the pacemakers left the leaders to it, Karoki moved to the fore but Boston Marathon champion Cherono had superior finishing strength and strode away for a one-second victory, clocking 2:05:45 to win ahead of Debela. Mengistu was third in 2:05:48 and Karoki fourth in 2:05:53 as Abdi moved up to finish fifth in 2:06:14.

USA’s Daniel Romanchuk won the elite men’s wheelchair race in 1:30:26 for a clear victory as the battle for second place was won by Britain’s David Weir in 1:33:31. South African Ernst van Dyk placed third and Britain’s Johnboy Smith fourth, as both athletes clocked 1:33:32.

The elite women’s wheelchair title was secured by Switzerland’s Manuela Schär in 1:41:08, with USA’s Tatyana McFadden second in 1:45:22.