Organisers celebrate three-years-to-go milestone, with Alexander Stadium refurbishment said to be “progressing on budget and on schedule”

With three years to go until the opening ceremony of the Birmingham 2022 Commonwealth Games, organisers have unveiled the new brand and vision for the Games and held a free community festival of sport, culture and food in the West Midlands city.

Birmingham 2022 has announced its commitment to organising a ‘Games for Everyone’, that enables the city and the West Midlands to take advantage of the opportunity to showcase the region to a global audience.

It's three years to go!

The Birmingham 2022 Commonwealth Games is a once-in-a-lifetime opportunity to put this vibrant city and region firmly on the map! https://t.co/wCy5LrBEuY
#B2022 #Birmingham2022 #CommonwealthGames #CommonwealthSocial #3YTG #WestMids pic.twitter.com/Mmy7AcSXTe

Saturday’s ‘Commonwealth Social’ community festival has been held to give residents the chance to come together with Team England athletes, local business and community leaders and Games representatives and celebrate the countdown to the event.

The event was also seen as an ideal opportunity to introduce the new Birmingham 2022 brand, which connects key West Midlands destinations – many of which will host events during the Games – and brings the locations together to create a ‘B’ shaped design.

Speaking on the three-years-to-go milestone, Cllr Ian Ward, leader of Birmingham City Council, explained how refurbishment of the Alexander Stadium, which will host the athletics plus the opening and closing ceremonies at the Games, is “progressing on budget and on schedule”.

“With just three years to go, we are at the point when everything about the Commonwealth Games is becoming much more tangible,” he said.

“The council-led projects that are enabling the Games, including the development of the Commonwealth Games Village and refurbishment of the Alexander Stadium, are progressing on budget and on schedule, with activity set to significantly increase in the coming months.

“Enthusiasm and interest in Birmingham 2022 is bubbling and will continue to grow as we get even closer to the staging of the biggest event in the city’s history and the long-term benefits the city and its people will gain in the years to come.” 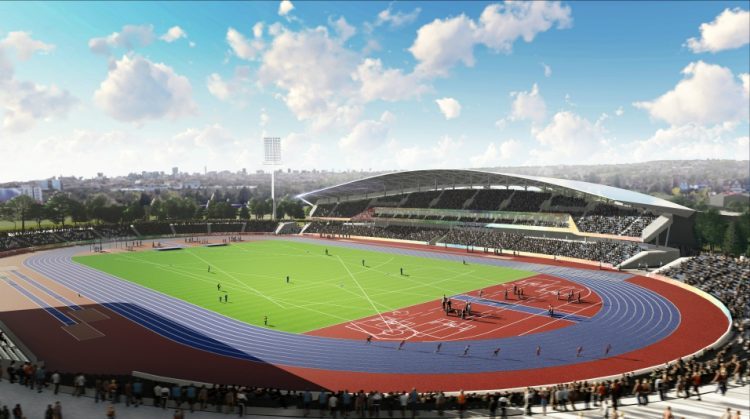 “Preparations are well under way for the delivery of a spectacular multi-sport event for the people of Birmingham, the West Midlands, England and the Commonwealth.

“Launching the new brand on this special day will also ensure the identity of Birmingham 2022 Commonwealth Games lasts forever.”