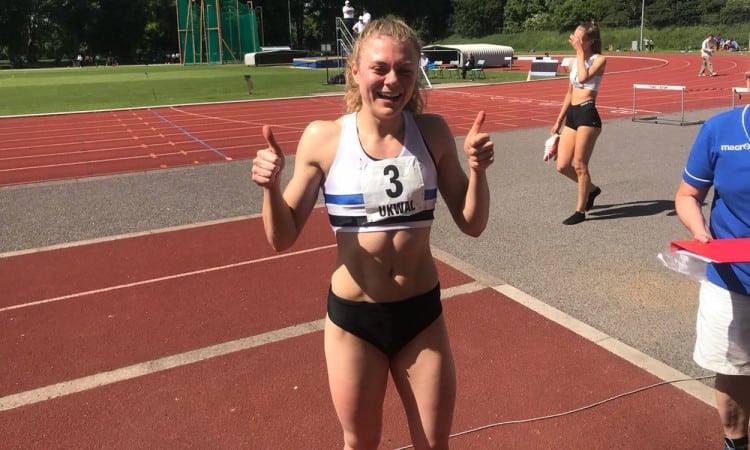 Dobbin, who improved from 23.31 to 23.14 in winning at Loughborough last week, this time improved all the way down to a top-class 22.84 at Saturday’s UK Women’s League Premier Division match.

In almost perfect conditions at Eton, the 23-year-old Edinburgh AC athlete kept her form superbly in the last 50 metres and easily bettered the European Championships standard.

The mark puts her second in the UK rankings this year to British record-holder Dina Asher-Smith.

Behind her, World Championships representative Shannon Hylton made an encouraging start to her 2018 racing campaign over half a lap with a 23.21 clocking.

Dobbin’s fellow Leon Baptiste-coached sprinter Alisha Rees was another athlete in record-breaking form as she clocked 11.59 to improve the Scottish under-20 100m best.

“So overwhelmed to run 22.84 at Eton today to break a 34-year-old record alongside the UKWL record,” Dobbin wrote on Twitter.

“Huge congrats to my training partner Alisha Rees who also ran a Scottish record over the 100m after being through so much this season.”

Back in Eton and over 400m, in her first race since the Commonwealth Games, Shelayna Oskan-Clarke sharpened up for the Stockholm 800m this week with a strong win in a tight finish in 54.22.

Another England team-mate looking in good form was Meghan Beesley. She easily won the 400m hurdles in 56.71, not too far short of her Gold Coast form where she ran 56.41. Beesley would have been quicker but for messing up her stride pattern over the final hurdle.

In the field the highlight was Naomi Ogbeta’s 13.51m triple jump victory.

Overall, Birchfield were the winning team and they also won the men’s Premiership match in Cardiff.

Shaftesbury’s Seb Rodger won the 400m hurdles in 49.95 while in the field Cardiff’s former world finalist Brett Morse won the discus with a 58.52m win.