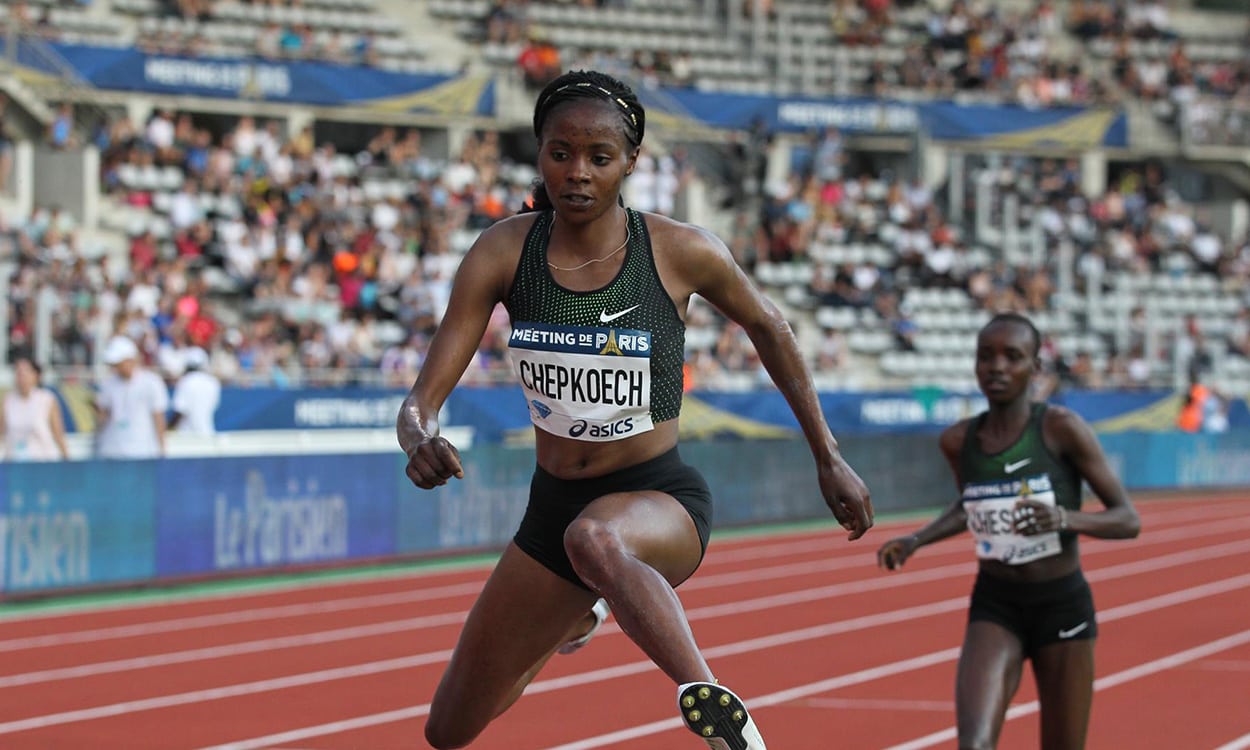 Kenyan clocks 8:44 on an incredible evening of action in Monaco

The IAAF Diamond League meeting in Monaco started sensationally and then got even better!

Kenya’s Beatrice Chepkoech went into the event with a PB and world lead of 8:59.36 and finished with an incredible world steeplechase record of 8:44.32.

Caroline Tuigong blasted the opening kilometre in 2:55.23 and Chepkoech then took over and passed 2000m in an even faster 5:49.81.

Most thought that second kilometre of 2:54 was too fast but she remained relaxed and in control.

Her last kilometre was a remarkable 2:54.51 and she took eight seconds off Ruth Jebet’s world record.

Almost 90 metres back, Courtney Frerichs broke the US record with 9:00.85 and went sixth all-time.

Chepkoech, who was fourth in the Olympics and world championships, said: “I wanted to break the world record, that was the plan from beginning of the season. And I was aware the biggest chance will be in Monaco due to weather, crowds and the whole environment. This plan worked well.

“I knew I was running fast splits, but I was not worried, I felt strong during the race. I was thinking maybe I can break 8:50 but not at all was I dreaming about 8:44. And this time still could be improved, I’m sure. Maybe my next target could be to run under 8:40.

“It is great feeling that I brought back the steeple women’s record to Kenya. I’m very proud of it. And that after six years of running and three years with steeple.”

The opening Diamond League event on the programme set the meeting off to a great start. Olympic champion Shaunae Miller-Uibo won the 400m in 48.97 to go 10th all-time in setting a Diamond League record and taking almost half a second off her PB.

It was not a clear win though as Bahrain’s Salwa Eid Naser pushed her all the way and less than a metre back was rewarded with an Asian record 49.08 and that moved her up from 35th all-time to 13th.

There was a huge gap to third and Shakima Wimbley’s 50.85.

The following event – the men’s 800m – was also among the quickest ever times.

While he couldn’t hold the sub-1:41 pace he did keep his form superbly and he won by a second in 1:42.14 to take well over a second off the previous world lead.

Only five men have run faster, including Amos himself in the London Olympics.

The place times were also remarkable. Brandon McBride set a Canadian record of 1:43.20 in second and Saul Ordonez set a Spanish record of 1:43.65 in third.

O’Hare’s time was a Scottish record and moved him to sixth all-time among Britons while Wightman moved to equal 14th.

Predictably the race was won by world silver medallist Timothy Cheruiyot in a world lead of 3:28.41 as he sprinted to yet another impressive victory and moved to 10th all-time in the world.

Cheruiyot was ahead at 1200m in 2:48.06 but only really opened out in the straight and he won by over a second from his world and Commonwealth conqueror Elijah Manangoi, who also went inside 3:30 with 3:29.64.

Just missing the barrier in third was Filip Ingebrigtsen who set a Norwegian record 3:30.01 and he was followed in by his brother Jakob, who set a PB of 3:31.18 – a sensational time for a 17-year old.

The men’s steeplechase was overshadowed by the women but was still fast.

Jager, who was battling with El Bakkali until late on the last lap, again just missed the eight-minute barrier with 8:01.02 in second while Olympic and world champion Conseslus Kipruto was third with 8:09.78.

The sprint action was also impressive.

Noah Lyles won the 200m in a world lead of 19.65 to go equal eighth all-time as he won by three metres from world champion Ramil Guliyev, who was timed at 19.99.

Queen Harrison, who was only third in the Athletics World Cup after an early error, made no mistakes here as she won the 100m hurdles by two metres in 12.64 with former Olympic champion Dawn Harper-Nelson a distant second in 12.90.

The field action might not have matched the track but was still superb.

He had earlier won the competition with a first-time clearance of 2.33m to beat China’s Wang Yu with 2.30m.

Taylor’s marginally wind-aided mark (+2.1m/s) came in the second round, while Pichardo’s best was his third with a +2.14m/s wind.

Anzhelika Sidorova won the pole vault with a PB-equalling 4.85m as a total of eight athletes cleared 4.75m or higher. Holly Bradshaw, who had recently cleared 4.80m in Germany, failed her opening height of 4.40m.

The shot put competitions had taken place the evening before at a scenic temporary portside venue.

Olympic champion Ryan Crouser won the men’s event with a throw of 22.05m, while the women’s victory was claimed by world champion Gong Lijiao with a final round throw of 20.31m.

A total of seven athletes threw beyond 21.20m in the men’s competition and four throwers recorded marks of over 19 metres in the women’s event, including Raven Saunders, Christina Schwanitz and Valerie Adams.

» See the next AW magazine for more